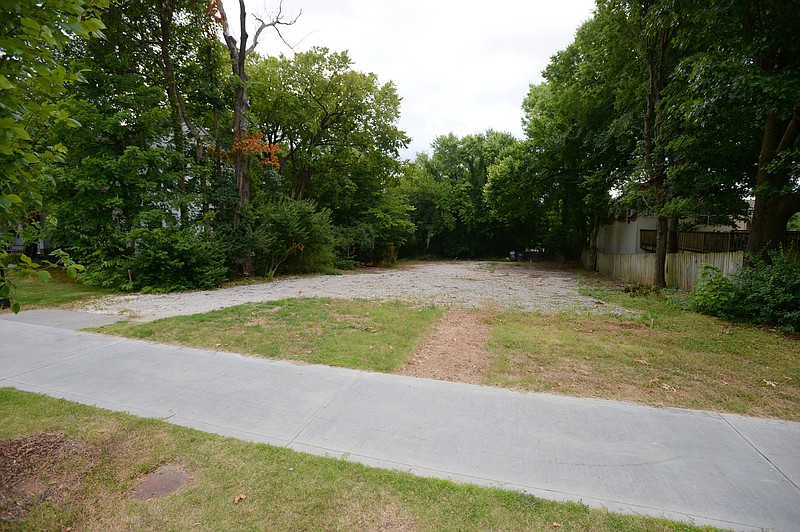 Sigma Phi Epsilon is requesting a rezoning from the City Council to build a new house on a 0.2-acre lot, seen Tuesday, June 30, 2020, at 360 Arkansas Ave. in Fayetteville. The organization's former building, constructed in 1911, was demolished earlier this year. (NWA Democrat-Gazette/Andy Shupe)

FAYETTEVILLE -- A University of Arkansas fraternity wants to replace its house at the edge of campus, and neighbors worry a rezoning could open the historic street to commercial uses and big buildings.

The City Council today will consider the rezoning request for a 0.2-acre lot at 360 Arkansas Ave. The item first went before the council June 16.

The Arkansas Alumni Corporation of Sigma Phi Epsilon has owned the lot since 2008. The chapter's house, built in 1911, was demolished earlier this year.

Sigma Phi Epsilon has about 190 members at the University of Arkansas campus. Just more than a dozen members lived in the house.

The rezoning is for the fraternity to build a new house. The lot is zoned for multifamily dwellings up to 40 units an acre, as is the entire eastern side of Arkansas Avenue.

The city in the 1970s made two requirements specifically for fraternity and sorority houses built under a multifamily zoning. One requirement says the house has to be built on at least a 1-acre parcel. The other says a fraternity or sorority has to have at least 250 square feet per resident.

Those two requirements make it impossible for a Greek organization to build on a small lot, said Garner Stoll, the city's development services director. As such, every fraternity or sorority house that has wanted to build on a private piece of land smaller than an acre has had to seek a hardship variance from the city's board of adjustments, or seek a rezoning. The board of adjustments has granted the variance for about a handful of Greek structures, Stoll said.

In this instance, Sigma Phi Epsilon is seeking a rezoning. The downtown general zone the fraternity is seeking would allow the organization to build its house, but also would allow a number of commercial uses if the property ever were to change hands. Neighbors have taken exception to that possibility.

A downtown rezoning is inappropriate for the neighborhood, said Jeffrey Block, who owns the house immediately north of the lot. Arkansas Avenue was excluded from the city's downtown zoning plans in 2006 for good reason, he said.

"It will change the character of this neighborhood completely, and it's a historic neighborhood," Block said.

Diane Block, Jeffrey's sister, said allowing restaurants, clubs, cafes or venues could have a ripple effect along the street.

"We feel that once they would grant this spot DG (downtown general) rezoning that it would open the entire area up to that by creating this precedent," she said.

Bill Mandrell, who lives on the second floor of the Blocks' building and has managed the property for 35 years, said the small lot inadequately served the fraternity house before it was demolished. There is no dumpster, and trash tended to pile up, he said.

Constructing a much larger building on such a small lot will only exacerbate the issue, he said. 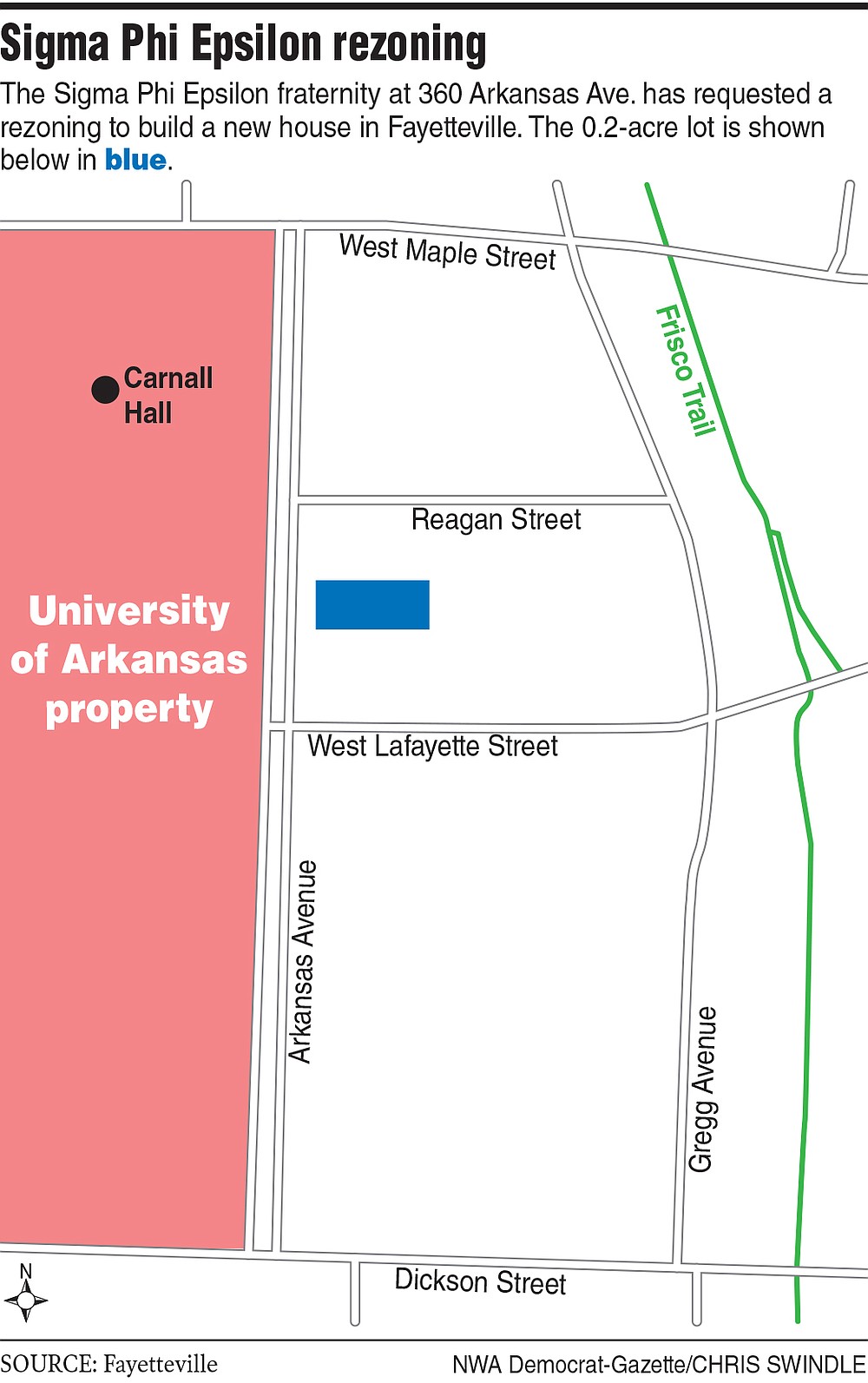 The Planning Commission unanimously rejected the rezoning request May 26. Commissioners said they supported a fraternity house being on the property, but not the form of the building, the setbacks and the way a building would address the street under the downtown general zoning.

Sigma Phi Epsilon has included a bill of assurance for the City Council to consider with the request. It would keep the building 15 feet from the sidewalk, with 7 feet of space between property lines and the sides of the building, and a 15-foot rear setback. It also would limit the height of the building to three stories. A third provision of the bill of assurance says the architectural elements shall be in similar nature to other structures on the street.

Phillip McKnight, representing Sigma Phi Epsilon, said he believes the bill of assurance meets the concerns of the neighbors. The fraternity thought it had the right to rebuild its house and demolished it without knowing about the additional requirements from the city, he said. Previous variances to code for parking and green space were approved by the Planning Commission in 2015.

"We are merely asking that the City Council allow us to rebuild our fraternity house, a house we believed had previously been approved by city leadership," McKnight said.

The University of Arkansas owns the right of way on the street, which includes the sidewalk on the east side. The university is not taking a position on the rezoning because it is private property, said Todd Fergason, campus planner.

As planned, the new Sigma Phi Epsilon house would have parking space for scooters and bicycles. Students would use parking spaces on campus.

What do you think?

To provide input on the Arkansas Avenue rezoning, go to: