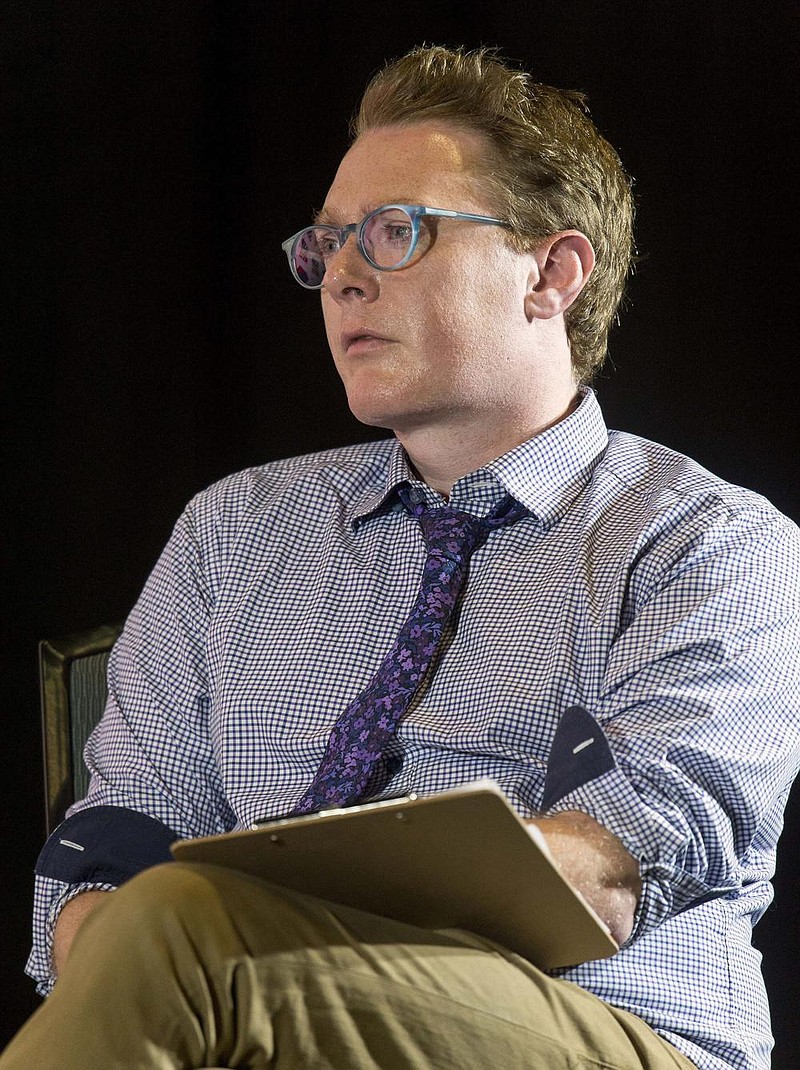 Clay Aiken participates in the fifth annual Politicon, “the Unconventional Political Convention,” which features debates, panels, films, comedy and podcasts on the subject of American politics. The former "American Idol" runner-up also hosts the Politicon podcast "How the Heck Are We Gonna Get Along." (Zuma Press/TNS/Brian Cahn)

RALEIGH, N.C. — Never say never, but running for political office — again — is not at the top of Clay Aiken's to-do list. And least not anytime soon.

That's even though Aiken, who first gained fame as a runner-up on "American Idol" and then went on to star on Broadway and run for the U.S. House in North Carolina's 2nd Congressional District in 2014, has a new project that's pretty politics-centric.

Aiken is the host of a new Politicon podcast called "How the Heck Are We Gonna Get Along," a sort of roundtable debate of political and current events topics.

Politicon, not to be confused with Politico, started as a Comicon-style convention that melds the worlds of entertainment and politics. As someone who straddles those worlds, Aiken sat on panels at Politicon conventions for several years and was approached by the creators (coincidentally, two former "American Idol" producers) to host the podcast. He says they knew he would not "demonize the people I disagree with."

"I grew up here and a lot of my family and I disagree and vote for different people, and I realize from that — and from running in a very red district a few years ago — that I can very adamantly disagree with people from a different party from me and also realize that they are not evil," said the Raleigh native, a registered Democrat.

"And I think that's in short supply nowadays. They knew that I was willing to listen to Republicans and conservatives, and not think that they were evil."

Aiken said the podcast aims for conversation without excessive arguing but admits they don't always succeed at that. After a couple of recent episodes about George Floyd, a North Carolina native who died while in police custody in Minneapolis, things "got a little heated," Aiken said, so they started having two guests instead of four. For now, they alternate with progressives for one episode and then conservatives the next.

"We do our best not to choose guests who are dyed in the wool and refuse to listen to the other side," Aiken said. "The goal is to have a conversation where people listen to each other."

That inability to listen to those from the other side, or to demonize those from a different party, is something Aiken has experienced firsthand.

When he ran for office against former U.S. Rep. Renee Ellmers in 2014, Aiken knew he would probably lose a lot of fans, even some diehard "Claymates" (a term that was given to his most devoted fans, but a term many of them do not care for).

"One of the things that made me hesitate to run for office was I believed-slash-knew that as soon as I put a 'D' behind my name, I was going to have people just not like me anymore. Period," Aiken said. "I said, 'if you're going to go into this, you have to be willing to never sing again.'"

Aiken recounted being in an airport in Atlanta around that time and encountering a former fan working in the Delta Club.

"The lady at the desk said, "Oh my God, Clay Aiken! I used to love you! I can't anymore because you're a Democrat.'

"She was sweet, and we had a conversation, but she was dead serious," he said.

One of the more interesting aspects of Aiken's 2014 political bid was that much of it was chronicled by Academy Award-winning documentary filmmakers for a series that aired on Esquire Network (now available to stream on Amazon Prime Video).

In "The Runner-Up," Aiken lets f-bombs fly, is frank about his insecurities and frustrations as a first-time candidate, and makes several unfortunate jokes about the age and appearance of his opponent, the 71-year-old Keith Crisco. (Crisco died suddenly less than a week after Aiken defeated him in the primary election.)

At the time, Aiken said he agreed to participate in the documentary because it was an "opportunity to bring transparency to an electoral process in desperate need of more openness."

Now, the four-episode docuseries — even talking about it — makes Aiken uncomfortable. He said he hasn't even watched the whole thing.

"I watched most of the first three. I didn't watch the last one — I know how it ends," he says of his loss to Ellmers.

"The first one was disturbing because of Keith's death because that was hard to watch. The second one was innocuous. The third one, though, disturbed me to the point that I couldn't watch the fourth one. ... I watched myself in the third episode and thought, I'm not happy with myself. I was very upset. I mean, I still think about that — even thinking about it now I get a little upset with myself."

The part of the episode that bothers Aiken comes during a panel in Sanford, N.C, right after the Fourth Circuit Court of Appeals had invalidated Amendment One in North Carolina, making same-sex marriage legal in the state.

Aiken, who is gay, was asked how he felt about same-sex marriage being legalized.

"The answer that I gave just makes me want to throw up," he said.

"I tried to thread the needle. I tried to say something like, 'Well, it hasn't really been decided, we'll wait for the Supreme Court to decide it, then we'll see then.'

"When I watched it I thought, 'Who the hell was I kidding?' This is the type of politics I hate, and I did it myself. Everyone knows that I'm gay, why would I say anything other than, 'Yeah, I'm thrilled that it's legal now, it should be legal — but that's not why I'm running."

Aiken thinks in the moment he was trying not to offend certain voters, but added, "Those people were not going to vote for me anyway, and all I did was make them roll their eyes and say, 'Well, he's full of (it).'"

Aiken says when he speaks now, he may be moderate on many issues, but he doesn't answer questions with "half-assery."

Before he was the runner-up to Arsenio Hall on "Celebrity Apprentice," before running for office, before the podcast, Aiken enjoyed tremendous success as a musician and performer.

After finishing in second place on Season 2 of the Fox singing competition show "American Idol," his album "Measure of a Man" (2003) went multi-platinum. He released six more albums after that, selling more than 5 million albums total, and is considered the fourth-highest-selling "American Idol" contestant ever.

In 2008, Aiken performed on Broadway in the musical "Spamalot." In 2018, he teamed with Ruben Studdard, the man who beat him on "Idol" in 2003, for the "Ruben & Clay's First Annual Family Fun Pageant Spectacular Reunion Christmas Show" on Broadway. The two have remained friends since their time on "Idol."

Aiken said he and Studdard had planned to take their Christmas show on tour this year, but with the covid-19 pandemic, "clearly the world has decided against that. Maybe next year."

As far as a performing career, "I do things here and there," Aiken said.

"I have no strong desire to go back to recording," he said. "At almost 42, you don't see people my age on pop radio. It would be naive for me to assume that I was going to have some sort of pop hit like in 2003. I don't have a desire to do that, but I still have an itch I have to scratch every once in a while, so I perform when I have an itch."

Aiken says he has no specific plans, no left-undone passion projects to complete. He just tries to stay open to opportunities when they come up — in whatever realm.

Listen to 'How the Heck Are We Gonna Get Along'

You can subscribe and listen to the podcast "How the Heck Are We Gonna Get Along" wherever you listen to podcasts (via Apple, Stitcher, Spotify, etc.) or stream from the Politicon website: politicon.com/podcast.

Listen to ‘How the Heck Are We Gonna Get Along’

You can subscribe and listen to the podcast “How the Heck Are We Gonna Get Along” wherever you listen podcasts (via Apple, Stitcher, Spotify, etc.) or stream from the Politicon website: politicon.com/podcast.