Nonpayment disconnections to remain on pause, utilities in Arkansas say 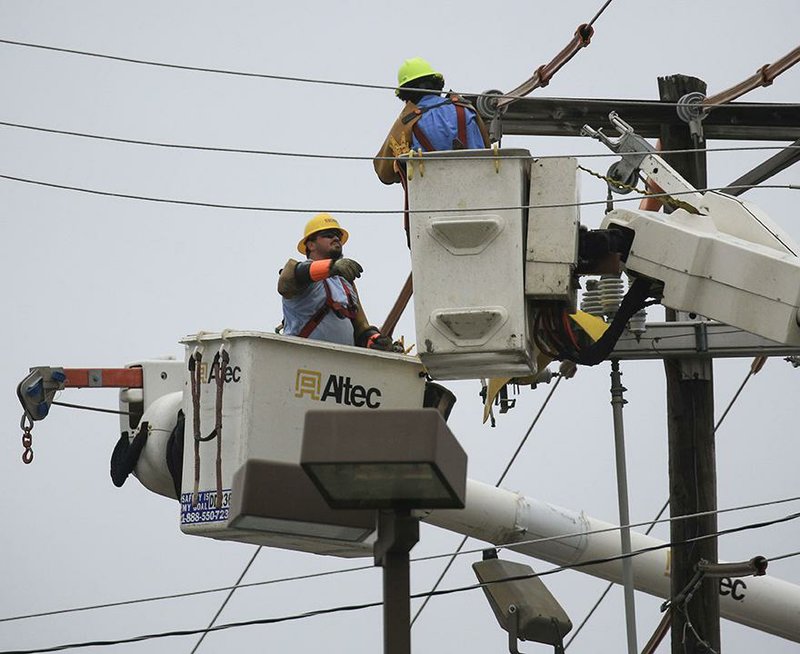 Linemen for a utility contractor work Tuesday, March 17, 2020, in Sherwood changing a utility pole on East Kiehl Avenue near Arkansas 107. Utility companies across Arkansas have pledged not to disconnect customers during the coronavirus pandemic.

Utility companies in Arkansas say they will continue adhering to an order not to disconnect customers who do not pay their bills, as the coronavirus crisis stretches into the summer months.

Under an April 10 order from the Arkansas Public Service Commission, regulated utilities cannot disconnect customers for as long as Gov. Asa Hutchinson's state of emergency declaration persists, or until the commission rescinds its order.

The governor extended his emergency order for an additional 45 days on June 18, meaning the state of emergency is scheduled to expire Aug. 3.

Before the Public Service Commission's order, many utilities in Arkansas providing water, gas and electricity had already promised not to disconnect customers for lack of payment amid the pandemic.

When asked for an estimated number of customers who under normal circumstances would be disconnected for missing their payments, some utilities in the state said it is difficult to determine the figure. However, at least one, Southwestern Electric Power Co., said more customers are falling behind on their bills during the outbreak.

According to Peter Main, a spokesman for SWEPCO, about 17% of customers are behind on their payments at the moment. He said that figure represents an increase since the start of the pandemic.

"We understand that many customers are experiencing financial hardship, and we have a number of flexible bill payment options to help customers get back on track," Main wrote in an email.

A spokeswoman for Entergy Arkansas, the largest electric utility in the state, said the company cannot say how many people would ordinarily have been disconnected for nonpayment.

"We won't know until we run a report on the number of people subject to disconnect," Entergy's Kacee Kirschvink wrote in an email. "That won't happen until disconnections begin. A lot of times people will pay their bill as soon as they get the disconnect notice, so the disconnect number constantly changes."

Kirschvink said the company is encouraging customers to make payments "so their balance doesn't accrue to an unmanageable level."

The electric and natural gas utility company CenterPoint Energy said it will continue to hold off on disconnections and follow the Public Service Commission's order until the state of emergency declaration expires Aug. 3, according to spokesman Ross Corson.

Corson wrote in an email that it is "very difficult" to determine the number of customers who have not paid their bills and as a result would normally be disconnected.

"CenterPoint Energy disconnects service only when all other payment options have been exhausted," he wrote. "Before any service disconnection, we make multiple attempts to communicate a final payment deadline and collect the delinquent balance."

The utility has not sent disconnection notices since March, Corson said.

According to Brian Alford, a spokesman for Oklahoma Gas and Electric, the utility will continue to follow the Public Service Commission order for the time frame established by the governor's extended emergency declaration.