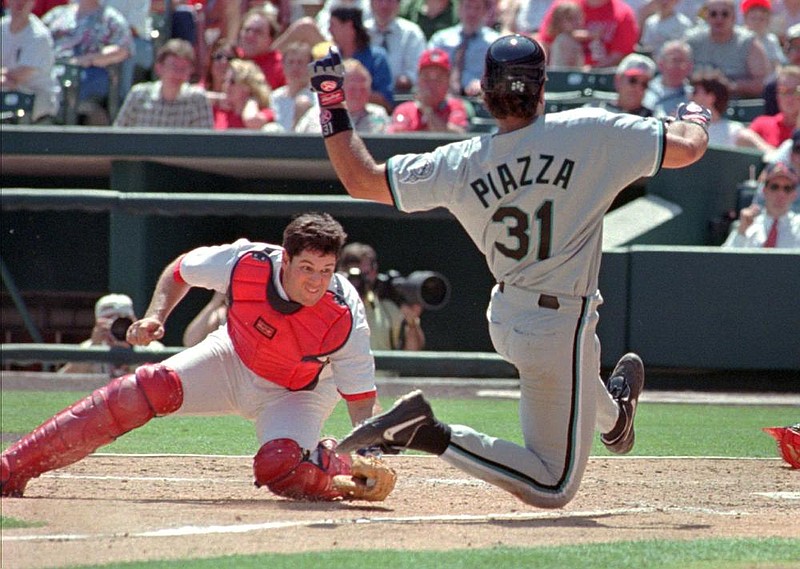 Former St. Louis Cardinals catcher Tom Pagnozzi, here trying to tag out Mike Piazza of the Florida Marlins at the plate during a 1998 game, honed his skills for the position at Arkansas in 1983 under the tutelage of former Razorbacks coach Norm DeBriyn. Pagnozzi played for the Cardinals for 12 seasons from 1987-98, earning Gold Gloves in 1991, 1992 and 1994. (AP file photo)

FAYETTEVILLE -- After Tom Pagnozzi signed to play baseball at the University of Arkansas for the 1983 season, he was counting on Razorbacks coach Norm DeBriyn to teach him to become a catcher.

Pagnozzi starred at Tucson (Ariz.) Rincon High School and Central Arizona Junior College as a third baseman, but scouts told him his best chance to get to the big leagues was as a catcher.

Major colleges such as Arizona, Arizona State and Oklahoma State let Pagnozzi know he could have a shot to catch, but if it didn't work out he would play third base to make sure he was in the lineup after he batted .456 as a freshman at Central Arizona and .454 as a sophomore.

DeBriyn made a different pitch. 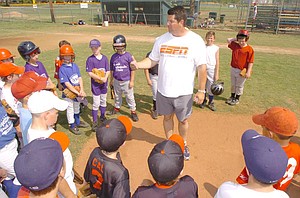 "I think Tom believed me and that I was sincere. What I said really registered with him."

DeBriyn was the only coach who told Pagnozzi what he wanted to hear.

"Right there, I was smart enough to say, 'Man, he's going to make me catch,' " Pagnozzi said. "We really worked at it, and he made me into a catcher."

For those career accomplishments, Pagnozzi is No. 5 on the Arkansas Democrat-Gazette's list of top Razorbacks in Major League Baseball.

"Coach D played a huge, huge role in me having a big-league career," Pagnozzi said. "He taught me the right way to catch from the get-go.

"We walked through everything to do as far as framing pitches, catching, blocking and throwing."

After Pagnozzi signed with the Razorbacks and came to campus, he momentarily wondered what he had gotten himself into when he saw DeBriyn was left-handed.

The last left-handed catcher in the major leagues was Benny Distefano in 1989, when he caught three innings for Pittsburgh.

Left-handers don't play catcher. It's more difficult to throw to third base, and on throws to home plate, a catcher with a glove on his right hand would have to bring it across his body to make a tag.

"When I realized Coach D was left-handed, I called my dad and said, 'I think I screwed up coming to Arkansas,' " Pagnozzi said. "He went, 'What are you talking about?' I said, 'The coach who's going to teach me how to catch is left-handed.'

"My dad was like, 'Whoa, whoa, whoa, hang on. That doesn't mean he can't teach you.' He finally talked me off the cliff."

DeBriyn said he wanted to catch when he played at Wisconsin-Oshkosh, but his coach wouldn't allow it. Instead, DeBriyn played first base and the outfield, but he never lost his love for catching and made it an emphasis to teach how to play behind the plate when he became a coach.

"I went to every clinic I could to learn about catching," DeBriyn said.

After Pagnozzi signed with Arkansas, DeBriyn called Jeff Torborg, who as a major-leaguer caught a perfect game by Sandy Koufax with the Dodgers, and no-hitters by Bill Singer and Nolan Ryan with the Angels. Torborg later was a manager for five different teams.

Pagnozzi said he used to show up to practice 90 minutes early so he and DeBriyn could work on catching drills.

"Tom was a perfect student because he worked so hard at it," DeBriyn said. "He really bought into it and had the confidence in himself that, 'I'm going to make it. I'm going to be a big-league catcher.' "

"I couldn't have asked for a better teacher than Coach D," Pagnozzi said. "He was so devoted, and he saw my drive and the way I prepared, and he knew I was going to give it everything. As a coach when you see a kid like that, you want to get in that foxhole with him and give everything, too."

Catching didn't take anything away from Pagnozzi's hitting in his lone season at Arkansas. He batted a team-high .362 with 4 home runs and 55 RBI to help the Razorbacks go 44-21 and make the NCAA Tournament.

The Cardinals picked Pagnozzi in the eighth round of the 1983 draft. At 20 years old, he began his professional career at Class A in Macon, Ga.

By 1985, Pagnozzi had advanced to Class AAA Louisville. The Cardinals planned to call him up early in the 1986 season, but before they could Pagnozzi broke his left wrist.

Pagnozzi made his MLB debut early in the 1987 season after Cardinals starting catcher Tony Pena was injured.

When Pena returned, Pagnozzi was sent back to Louisville, but he was called back up to St. Louis in late August in time to be added to the Cardinals' playoff roster.

"Your rookie year, you're just so happy to be there in the big leagues," Pagnozzi said. "Then to be in the World Series, it's like a dream."

The Twins won the World Series 4-3. The Cardinals made the playoffs again in 1996, but fell one victory short of the World Series when they lost to Atlanta 4-3 in the National League Championship Series.

"I didn't know '87 would be my only World Series," Pagnozzi said. "We had a good young team, and I thought we'd play in more. We got close, but we never made it back."

When St. Louis traded Pena -- a five-time All-Star -- to Boston after the 1989 season, Pagnozzi split catching duties in 1990 with Todd Zeile. In 1991, Zeile moved to third base and Pagnozzi became the No. 1 catcher.

Pagnozzi won the National League Gold Glove in 1991 while Pena won it in the American League.

"Tony was a good friend and a good teammate, and when we both won Gold Gloves the same year, that was really special," Pagnozzi said. "We were at the awards banquet, and I thanked Tony in my speech, then he talked about how special it was for him as my mentor that we were both sitting here today as the best at our position."

"I wasn't an off-the-charts guy, but I played hard," Pagnozzi said. "I played the game the right way, came to play every day.

"I loved it. I wish I could still be there. I never looked at it like a job."

Pagnozzi and his wife, Colleen, and the couple's three children live in Fayetteville. Pagnozzi is co-owner of Southern Trend, a T-shirt company.

While Pagnozzi said he's lived a blessed life, the past four years have been tough with Colleen battling cancer in her colon, liver and lungs.

Pagnozzi said his wife has undergone chemotherapy more than 60 times, and that they travel every three months to Houston for treatments at MD Anderson Cancer Center.

"Cancer is a nasty disease," Pagnozzi said. "But my wife's an incredible fighter. She's done a tremendous job battling it."

Pagnozzi has been a generous booster for the Arkansas baseball program. He bought furniture for the clubhouse at Baum-Walker Stadium several years ago, and also paid for a baseball secretary after he called DeBriyn at his office late one night -- planning to leave a voicemail message -- and his old coach answered the phone because he was trying to catch up on the mail.

Pagnozzi Charities was started to help fund the baseball program, but now that the sport more than pays for itself, Pagnozzi and Parker Charities -- with former Razorback and current Philadelphia Phillies pitcher Blake Parker joining Pagnozzi -- helps underprivileged youth in Northwest Arkansas.

"As my wife says, you've got takers and givers in life," Pagnozzi said. "Coach DeBriyn means so much to me because of the time he spent helping me get to where I wanted to be, so I always wanted to give back."