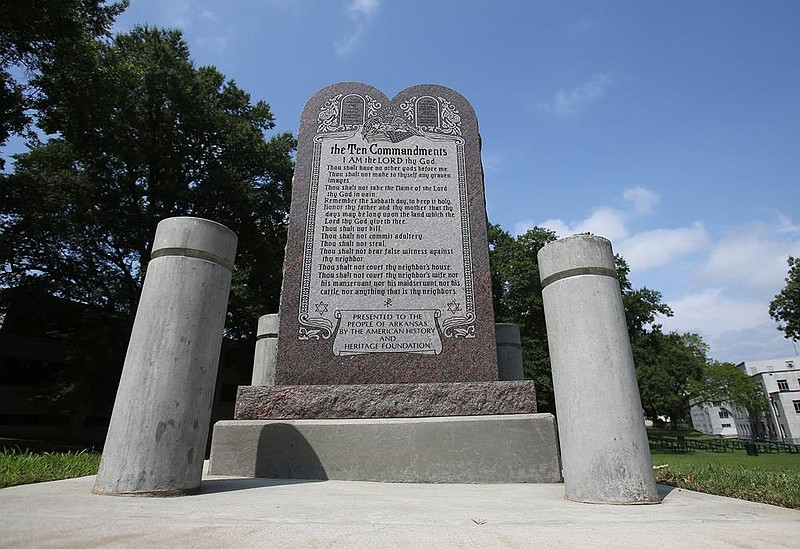 The Ten Commandments monument at the state Capitol was rebuilt in 2018 after the previous version was destroyed a year earlier by an angry motorist. (Arkansas Democrat-Gazette/Thomas Metthe)

As monuments across the country are being toppled by protesters or officially removed in response to a surge of complaints that they promote racism, the fate of a different kind of monument at the Arkansas state Capitol remains in limbo.

A non-jury trial that had been scheduled to begin next week on whether the Ten Commandments monument violates the constitutional concept of separation of church and state has been postponed for 60 to 90 days as a result of disruptions caused by the coronavirus pandemic. A new trial date hadn't been set as of Thursday.

Meanwhile, U.S. District Judge Kristine Baker has had no shortage of pretrial disputes to contend with.

Most recently, the judge is considering whether the names of people who contributed large amounts of money toward the creation and installation of the monument should be handed over to the plaintiffs.

The American History and Heritage Foundation is an organization created and directed by state Sen. Jason Rapert, R-Conway, which collected more than $85,000 from about 800 donors to rebuild the monument in 2018 after it was destroyed a year earlier by an angry motorist on the same night it was first installed. The foundation contends it shouldn't have to disclose those records because the donors' names aren't relevant to the claims in the lawsuit.

But one of two groups that challenged the constitutionality of the monument's placement on the Capitol grounds, and a third group that has intervened in the case, are demanding that the donors be unmasked, arguing "it is highly implausible that donors to the effort to place this monument on the State Capitol grounds are subject to any reasonable fear of retaliation," as attorneys for the foundation argued.

The two groups initially filed separate lawsuits over the constitutionality of the 6-foot-tall granite monolith's presence on the Capitol grounds, between the Capitol building and the Justice building, where they say it can be seen as a government endorsement of one religion.

One group, backed by the American Civil Liberties Union of Arkansas, consists of four members of a walking and cycling group who say the monument is visible to them from their regular route and offends them. They are Donna Cave, a retired teacher who is agnostic; Judy Lansky, a retired federal law clerk who is Jewish and an atheist; Pat Piazza, a retired social worker who is agnostic; and Susan Russell, a state research associate who is agnostic. They are known as the Cave plaintiffs.

The second group, known as the Orsi plaintiffs, include Anne Orsi, a writer and attorney who is president of the Arkansas Society of Freethinkers; and numerous others including a Methodist minister; an agnostic attorney; a practicing Wiccan, pagan and Buddhist; an Episcopalian; the American Humanist Association; and the Freedom from Religion Foundation.

Because both suits involve similar issues, and both groups want the monument removed, Baker consolidated them June 25, 2018. They had both been filed on the same day -- May 23, 2018.

Six months later, Baker allowed the Satanic Temple to intervene in the case. The group describes its mission as encouraging benevolence and empathy among all people. While it agrees that the monument constitutes an illegal government endorsement of religion, it seeks an alternative solution: the placement of an 8½-foot-tall bronze statue of Baphomet -- a deity that is part man, part goat -- on the Capitol grounds.

The sole defendant in the case is now Secretary of State John Thurston, who took over the constitutional officer position after the term of the original defendant, former Secretary of State Mark Martin, ended. Martin's office allowed the installation of the monument, which was paid for by donations to Rapert's foundation, after the senator drafted the 2015 legislation authorizing the monument's placement -- Act 1231 of 2015.

The Orsi plaintiffs argue that the act "articulates a sham secular purpose," arguing that the monument "plainly contains both religious text and religious symbolism."

They argue that they are entitled to the names of big donors to show that the purpose of the monument was to "express the state's preference for a particular version of the Christian religion."

"The circumstances surrounding the placement of a monument on public property are directly relevant to both its purpose and a determination as to whether it constitutes an endorsement of religion," attorneys for the Orsi plaintiffs argued June 4.

Rapert and Kim Hammer, R-Benton, also co-sponsored legislation requiring lawmakers to approve proposals to erect new monuments before they can be considered by the Capitol Arts and Grounds Commission. It is that legislation that has blocked the request to install Baphomet.

Rapert isn't a defendant in the suit but is expected to be a key witness. In September, Baker ordered him to give a videotaped deposition in the case, but she granted his request limiting its dissemination after he complained that the producers of a film starring the Temple's founder had used an earlier recorded interview of him to harass and embarrass him.

Earlier this month, the Orsi plaintiffs asked Baker to hold Rapert in contempt of court for not providing financial documents for the foundation that are related to funds raised and spent for replacing the monument. The foundation, in turn, has filed a motion to quash the plaintiffs' subpoena and seeks a protective order to shield the names from public disclosure.

According to court documents, Rapert and Roger Quattlebaum, the foundation's treasurer, executed affidavits asserting that if religious or moral views of foundation members or potential members are publicly disclosed, it would hinder future fundraising activities and efforts to increase the foundation's membership, and subject the contributors to the threat of harassment and reprisal.

The foundation, represented by attorney Travis Story of Fayetteville, has filed a list that includes the amounts donated to the foundation but not the names of the donors, according to court documents.

Story didn't return a reporter's telephone call Thursday, but wrote in a court filing last month that any foundation documents pertaining to the Ten Commandments monument aren't relevant to the lawsuit.

The records "are privileged and there is no legitimate purpose for their effort to intrude into personal financial information and to establish a religious ideology of contributors ," Story wrote. He said the motion for contempt "and its focus on issues wholly immaterial to the case at hand is a diversionary tactic to deflect from the fact that their constitutional arguments in this case are without merit."

Earlier in the case, an attorney for Rapert released a 128-page list of people who publicly contributed small amounts, mostly ranging from $10 to $20, to a GoFundMe account to replace the monument. Most of the contributors were identified by name but a few listed themselves as "anonymous" in making donations.

The Orsi plaintiffs contend that the release of that list undermines Rapert's claim that the First Amendment protects him from having to disclose the information about donations raised through the foundation.

CORRECTION: Senator Jason Rapert is a Republican from Conway, and Secretary of State John Thurston is a constitutional officer. An earlier version of this story misidentified the men’s titles.