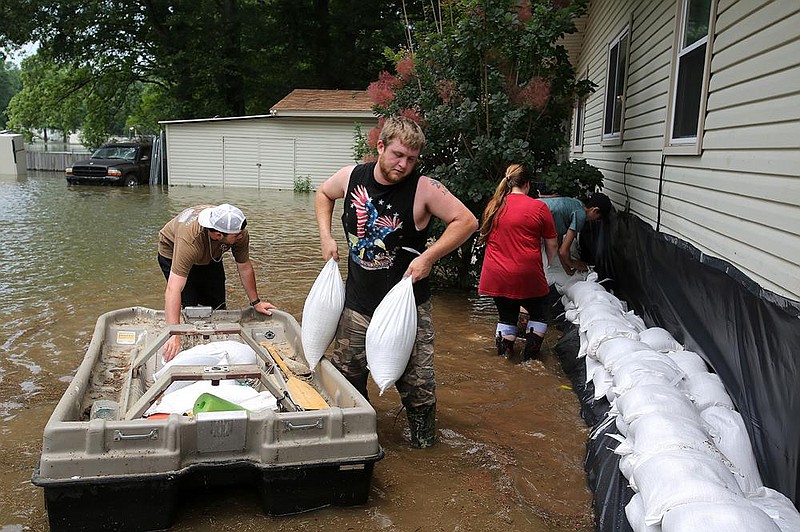 Joseph Shireman pulls a pair of sandbags out of a boat on June 5, 2019, while Gunner Allen (left), Kayla Biggs and Connor Green help put up a wall around Shireman’s home on Lake Conway in Mayflower. (Arkansas Democrat-Gazette/Thomas Metthe)

More than $3 billion in damage and more than a year later, people and communities are still rebuilding from the historic flood of the nation's sixth-longest river.

Last year's Arkansas River flooding is another major expense in federal disaster recovery, one of more than 100 billion-dollar disasters in the past decade. Such disasters have collectively cost more than 5,000 lives and $802 billion, according to the National Oceanic and Atmospheric Administration.

Their number has grown nationally as climate change begets more severe weather, the National Oceanic and Atmospheric Administration says. At the same time, the country's primary flood insurance program -- one of the biggest sources of aid after a disaster, going directly to property owners -- continues to borrow billions of dollars from the U.S. Treasury to pay claims.

In the past decade, according to the National Oceanic and Atmospheric Administration, Arkansas had several other floods that tested or breached levees: the spring of 2011, spring 2013, winter 2015, spring 2016, spring 2017 and spring 2019. They resulted in several deaths.

[Video not showing up above? Click here to watch » https://www.youtube.com/watch?v=nEezInIcFH8]

As bad as the Arkansas River flooding was last spring, it wasn't the year's most destructive. In fact, it caused the fifth-highest amount of damage among disasters last year.

Much of the damage from the spring 2019 record flood -- to roads, levees, and sand and debris blocking the Arkansas River's navigation channel -- has been or will be repaired. Some, such as water-battered homes without flood insurance, may not be.

People rebuilding are using federal money and some of their own. If they were to repair everything, most of the money would come out of their own pockets.

People who file flood insurance claims typically receive their money quickly, but those whose homes' damage requires big repairs to guard against future flood risks might have to wait one to two years to find out how much money they can get to make those fixes.

Veronica Villalobos-Pogue, program coordinator in the Arkansas Natural Resources Commission's dam safety/floodplain section, is working with about two dozen property owners who are waiting to hear if the federal government will buy them out or award them grant money to elevate their homes.

Most of them are living in their damaged homes.

"A lot of them have made enough repairs so that they can make the home habitable," Villalobos-Pogue said.

But the properties are still severely damaged. If the homeowners don't get the grant funding they need, they may have to find other money to elevate their homes so they can remain in compliance with federal requirements.

"They want to move forward, but they can't move forward because they don't know what it's going to cost them without a grant," she said.

Recovery from disaster can be a slow process, a sustained meditation compared with the swift act of the disaster itself. The cost, in what repairs can be made, can total hundreds of millions of federal tax dollars. Cities add in several millions of dollars. The rest of the damage repair is up to everyone else.

No report exists on all of the money spent on the Arkansas River flood's recovery, and how much of the $3 billion in damage occurred in Arkansas isn't clear. The Federal Emergency Management Agency doesn't have a breakdown for the state.

The Arkansas Democrat-Gazette, through requests and data analysis, tracked more than $80 million of the money allocated so far, down to the city level.

Federal assistance for disaster recovery is far less than the cost to repair the damage.

So far, federal data shows less than $100 million in aid to non-federal Arkansas entities for the 2019 flood. From FEMA, that's about $9 million for individuals, $38 million for public agencies and $31.6 million in National Flood Insurance Program claims.

The U.S. Department of Housing and Urban Development sent about $8.9 million to the Arkansas Economic Development Commission for aid for which the state will submit an action plan by the end of August.

The U.S. Army Corps of Engineers has received about $121 million for projects in Arkansas related to the flood. The Corps manages the McClellan-Kerr Arkansas River Navigation System, which was shut down for a period because of the flooding and required significant dredging to repair. The Corps also received a few million more for repair of its levees.

Typically, some private properties without flood insurance receive disaster damage. Those properties are often eligible for federal aid. But, on average for the spring 2019 flood, it amounts to about one-seventh of what federally insured properties receive.

Greg Gustek has come a long way since shoveling his flood-sodden belongings into buckets to throw away.

He reminds himself that fortunately no one in his family was hurt.

He and his wife, Rhonda, are back in their two-story home after several months of living with relatives. He's been able to wait on the final repairs for their house, as some of his neighbors employed contractors to repair or rebuild theirs.

Some of his neighbors also left while repairs were underway and returned when their houses became livable. Others stayed on their properties in campers.

A couple of damaged houses on Riverside Drive, where Gustek lives, remain untouched.

Not everyone had flood insurance, he said. One side of the street is more elevated than the other but flooded anyway. Many people who'd paid off their mortgages dropped their flood insurance (homes in flood plains with federally backed mortgages are required to carry flood insurance.)

Gustek is glad he kept his, even after his home was paid off. Even so, he still had to pay out of pocket for a lot of the recovery.

"I lost quite a bunch of stuff, and there's just no way to document it," he said.

FEMA reports that for last year's flood the average home in the National Flood Insurance Program received $71,300 toward repairs, while those that weren't in the program obtained only $9,700 in federal disaster aid.

Experts say flood insurance can be expensive and property owners often consider the risk of flooding insufficient to justify the cost. It's often a few hundred to a few thousand dollars per year, depending on the value of the structure and its location within the flood plain.

The number of National Flood Insurance Program policies has decreased in the past few years, across the country. Still, not having flood insurance can result a lot of headaches once a disaster strikes.

Whit Montague, state climatologist for the Arkansas Natural Resources Commission, said people need to understand that if they live in a 100-year flood plain, the chance of a flood happening may be 1% in a given year, but the odds of a flood occurring at some point while a person lives in the flood plain are higher than 1% if they live there longer than a year.

That's why it's critical to have insurance, she said.

Cost aversion may be only part of the reason people don't buy flood insurance.

So a person may buy a home having no idea it has flooded in the past. And if it's not in an official flood plain or the buyer doesn't plan to finance the purchase with a federally backed mortgage, the buyer isn't required to obtain flood insurance.

Renters are also at risk of not knowing they are in a flood plain or a structure with a history of flooding because they don't have mortgages, Villalobos-Pogue said.

"If they don't know to ask the right questions, they're not going to know that the house was flooded," Villalobos-Pogue said.

"And those people are actually the people who should be buying insurance because it's relatively inexpensive compared to people who choose to live in the flood plain," she said.

Montague said she's heard many stories since the flood from people who wanted to buy insurance but said they were mistakenly told that they couldn't because they didn't live in a flood plain. Then, they flooded.

In May, Villalobos-Pogue said she was working with four people who had just learned that their homes had previously flooded and are now considered Severe Repetitive Loss Properties. They're now facing higher federal insurance premiums.

Federal assistance after disasters can be slow and complicated, a U.S. Government Accountability Office report found last fall. Paperwork can be "onerous" and trained staffs lacking, the report concluded.

The biggest portion of FEMA disaster money has been in the form of "public assistance" for cities and counties, much of which hasn't been used yet, and all of which is sent to cities and counties only as reimbursement for what they've already spent.

City, county and state governments can get three-quarters of their projects funded by FEMA. As of Thursday, FEMA had obligated $38 million toward public projects.

North Little Rock was one of the biggest recipients of FEMA public assistance. The city has 15 projects, costing $9.4 million. FEMA would cover about $7 million, if all are approved for FEMA money, once the work is complete.

Some work, such as early debris removal and many repairs at Burns Park, are already completed. Most of the projects have until Dec. 8 to finish. Five projects, totaling just more than $200,000, are awaiting some type of action before they can proceed.

FEMA obligated another $2.8 million as of March to North Little Rock Wastewater for several projects fixing pipes and other infrastructure.

The city wants to spruce up the flooded Pine Bluff Regional Park, which has softball fields, a golf course and an RV Park. The annual Christmas lights display was canceled last year, and it's unclear if it will happen this year. Miller estimated that next year is when work will "really get going."

In North Little Rock, the biggest project can't be completed until next year, said Leonard Montgomery, the city's director of emergency management and 911. Only three barges in the region can clean up the sand amassed in a river inlet that has caused turbulence with a city hydroelectric generator. The city has scheduled a barge for February.

That's by far the city's priciest project and the most expensive approved by FEMA through March. Clearing the sand from the inlet will cost about $6.8 million, of which $5.1 million will be covered by FEMA.

"I'm not done yet," he said. "I've probably got another year's worth of work." 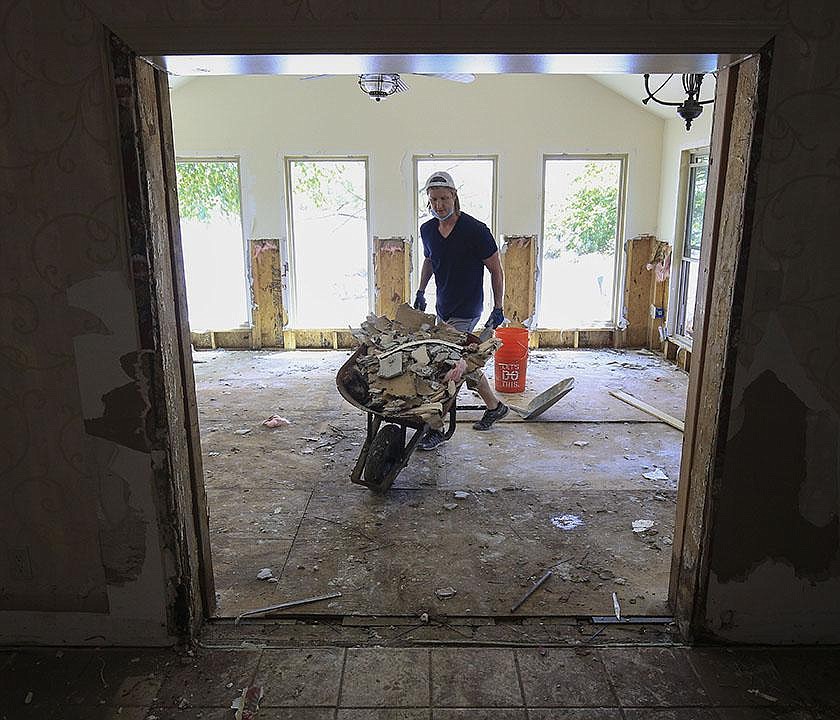 Ryan Bennett tears out Sheetrock at his grandmother’s house on Willow Beach Road in North Little Rock on June 10, 2019, after the house was flooded the previous week. (Arkansas Democrat-Gazette/Staton Breidenthal)