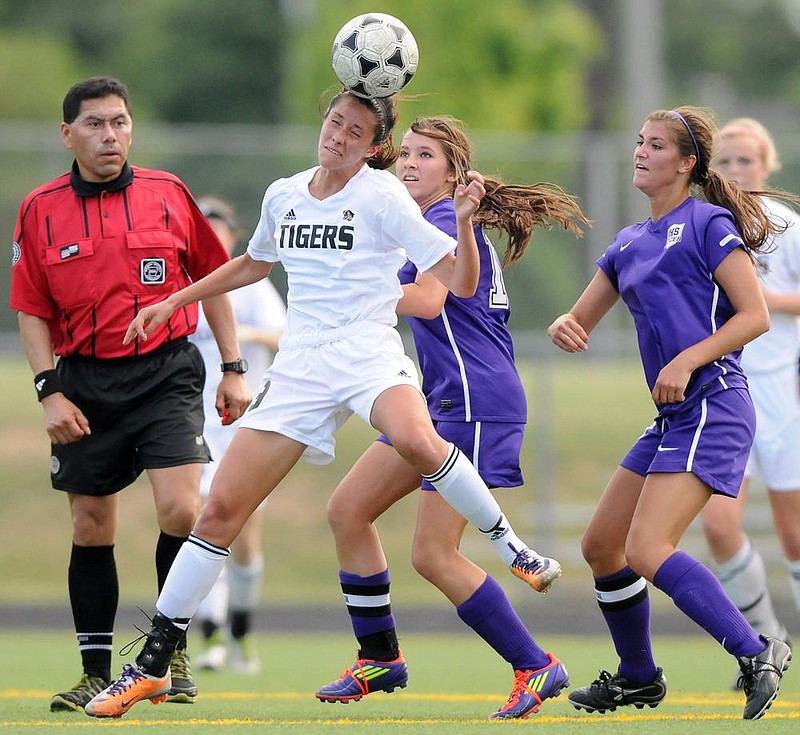 STAFF PHOTO MARC F. HENNING Bentonville's Tayler Estrada, left, heads the ball Friday, May 4, 2012, in front of Fayetteville's Taylor Hightower, right, and Taylor Ward during the first half of the Lady Tigers' game against the Lady Bulldogs in Bentonville.

BENTONVILLE -- Tayler Estrada knew there was a price she had to pay in order to become the type of soccer player she wanted to be.

The sacrifice would not be an easy one. The former Bentonville standout elected to give up basketball, track and field and cross country following her freshman year, even though she enjoyed playing them at the time.

"It was just getting to the point where I was stretching myself out so thin that I was going to get hurt. Sometimes I wish I would have figured it out and done those sports my entire high school career, but I also look back and think I wouldn't have been the soccer player I am if I had done that. It's tough, but I think multi-sport athletes are underrated."

While the price may have seemed costly at the time, Estrada greatly reaped from the benefits of her decision. She became the first -- and only -- three-time Gatorade girls soccer player of the year in Arkansas, and it led on to a college career at Kansas and a brief professional stint in Sweden.

While she played as a freshman when Bentonville reached the Class 7A state championship match in 2010, she played a big role in the Lady Tigers winning state titles in 2012 and 2013. And she did it with such a style that nobody else had ever displayed.

"She always played with an intensity level that is above and beyond any player I've ever coached," said former Bentonville girls soccer coach Kristina Henry. "It was just a matter of how to focus her energy.

"A lot of times, kids don't realize how stressed they are when they are trying to balance everything. What made her a great soccer player is her willingness to do whatever it took to make the team successful. That was a character trait, and her work rate was tremendous."

Because of that willingness, Estrada didn't sport the lofty offensive numbers that some of the state's best high school soccer players enjoy. She finished her career with 70 goals and 40 assists, and most of those came in her senior season as she compiled 24 goals and 20 assists.

Estrada, however, started receiving the benefits not too long after her dedication to soccer. It was during her sophomore season that she received her offer to play at Kansas, and that motivated her even more.

"Once I received my offer from KU, I realized it was definitely worth focusing on that sport," Estrada said. "At that point, I realized 'OK, you are legit. You need to start focusing on this and being the best player you can for this sport because this is a sport that can take your career farther.

"Getting to state every single year, that was a lot of fun. Getting Gatorade player of the year was a lot of fun, and I thought that was unique. It was something I worked extremely hard for, so I'm very proud of it. It always takes me back to being a high school hero, and I think it's hilarious that it's my claim to fame -- even though it's a pretty good claim."

CREDENTIALS She’s the only player to be named Gatorade girls soccer player of the year three times, earning the award 2011-13. … A four-time all-state performer who led Bentonville to four straight Class 7A state championship matches, and the Lady Tigers earned the titles in 2012-13. … Finished her career with 70 goals and 40 assists, with 24 goals and 20 assists coming in her senior season. … Went on to play soccer at Kansas, followed by a brief professional stint in Sweden. … Recently earned her masters degree in athletic training at Arkansas.

THAT’S WHAT SHE SAID “If we needed Tayler to play defense, she would do it. If we needed her to be a front runner, she would do it. She had a sense of the nuances of the game — a lot of the little things that players don’t necessarily have at that age.” — Former Bentonville coach Kristina Henry.