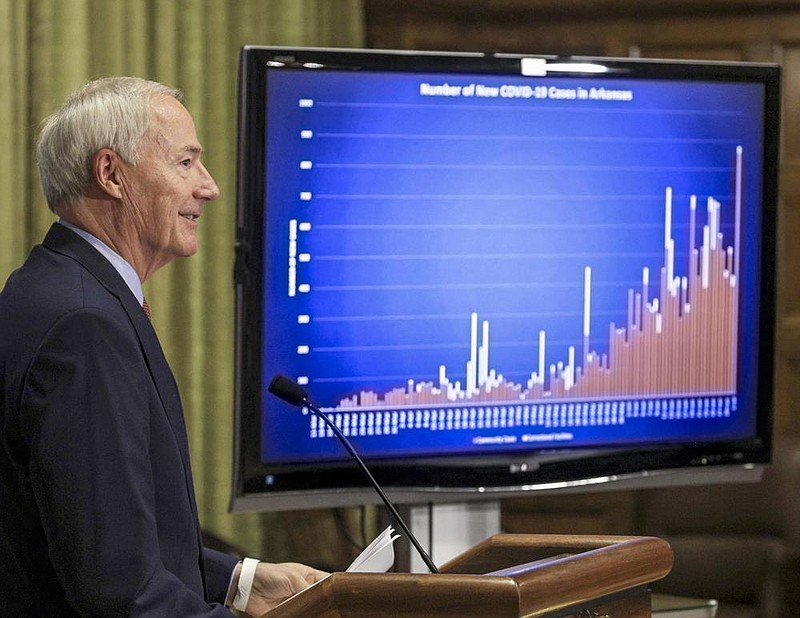 Gov. Asa Hutchinson said he was concerned about Thursday’s spike in new cases, although he noted that “a large part of it is because of the increased testing that we’re doing,” adding, “We’ll see whether this is a trend or whether it is an isolated day.” More photos at arkansasonline.com/73governor/. (Arkansas Democrat-Gazette/Staton Breidenthal)

Arkansas' count of coronavirus cases rose Thursday by 878, setting a new one-day record, even as Northwest Arkansas health care providers announced that they would tighten their criteria for testing to conserve supplies and manpower for hospitalized patients and others with urgent needs.

With cases surging in several states, Gov. Asa Hutchinson called on President Donald Trump to invoke the Defense Production Act to ensure laboratories keep up with the demand for testing.

He made similar comments Sunday on ABC's "This Week" on Sunday and MSNBC's "Morning Joe" on Monday.

"I've urged publicly that we need to take a national approach to testing," Hutchinson said Thursday.

"When you look at Texas, when you look at California, these hot spots, Arizona, that's needing more testing supplies, you add that to states like Arkansas, there's a huge pressure point right now, and we need to make sure that we are looking ahead not just this month, but next month, as we continue to expand testing to increase that supply chain of testing supplies so we don't run into those choke points that the hospitals are worried about."

He said backlogs at commercial laboratories have caused people to have to wait on results for a week, which he called "way too long."

The state's death toll from the virus, as tracked by the state Department of Health, rose by two, to 279, while the number of patients hospitalized with covid-19 fell by three, to 272.

Sixty-nine of the patients were on ventilators, down from 72 a day earlier.

After dipping on Wednesday, the number of cases that were considered active rose by 341, to 6,098. In addition to the new cases, that reflected the two deaths and 535 people who were newly classified as having recovered.

[Video not showing up above? Click here to watch » https://www.youtube.com/watch?v=jMhJgVtjvpE]

The cases added to the state's total Thursday set records for both the total number added and the number -- 860 -- that were not among prison or jail inmates.

It was more than double the 420 added Wednesday, when Hutchinson pointed to signs that the virus' spread in the state was slowing.

He said he was concerned about Thursday's spike in new cases, although "a large part of it is because of the increased testing that we're doing.

"We'll see whether this is a trend or whether it is an isolated day," he said.

In a news release Thursday, hospitals and other health care providers in Washington and Benton counties said they would limit testing to people with symptoms of covid-19; people who live with someone who had tested positive; asymptomatic health care workers with possible exposure to an infected person; and patients scheduled for surgical procedures.

The providers said they also will test other individuals, at the request of the Health Department, identified by the department as at risk of having the virus.

By contrast, the Health Department has recommended testing for anyone who has symptoms; has had contact with someone known or suspected to be infected; or lives in an area where transmission is occurring.

The providers expressed a worry that "the national supply chain for testing supplies will have a direct impact on testing in NWA and the rest of the State."

"There is a real concern in the health care community that the current demand for testing will exceed our capacity and impact our ability to provide timely test results needed to provide critical care services for those patients with acute health issues," Larry Shackelford, chief executive of Washington Regional Medical Center, said in the release.

The release noted that administering the tests requires protective gear, swabs and other supplies, plus staff members who are needed "as Northwest Arkansas sees a surge of people seriously ill from the virus."

Quest Diagnostics, which performs the majority of tests for screening centers in the area, announced Monday that its average turnaround time for results for most patients had been delayed and was averaging three to five days.

It said its turnaround time was still averaging one day for high-priority patients -- those who are hospitalized or awaiting surgery in acute-care settings and health care workers with symptoms.

Trump has invoked the Defense Production Act in the past to increase supplies of ventilators and nasal swabs, as well as to prevent meat processing plants from being shut down.

Hutchinson said he hadn't spoken to Vice President Mike Pence, who leads the White House coronavirus task force, about expanding the law's use for testing needs but hopes to bring it up with the White House "as I have opportunity."

The White House didn't respond to a request from the Arkansas Democrat-Gazette for comment on the issue Thursday.

The department has been testing about 700 people a day through the units and has been holding mass testing events around the state for people with or without symptoms.

Although Anthony Fauci, the country's top infectious diseases expert, told a U.S. Senate committee Tuesday that people should stop congregating in bars, Hutchinson rejected the idea of ordering bars to close, as governors in several states, including Texas and Arizona, have done.

The governor said he doesn't have evidence linking the spread of the virus to his decision to allow bars to reopen May 26.

"Until we have that data, that would just be the wrong thing to do, to rip somebody's investment out of their hands, and their employees, [to] put them on the unemployment line," Hutchinson said.

He said action could be taken, however, against individual bars that don't follow Health Department rules such as limiting the number of customers to 66% of a business' seating capacity.

Smith said after the news conference that the Health Department has identified one cluster of cases linked to a bar.

"We don't have additional information to release today about the bar, but we expect to have further details by tomorrow," Health Department spokesman Gavin Lesnick said in an email.

While only 18 of the cases added Thursday were listed as being among prison or jail inmates, Smith said that number likely would rise as the department gathered more information.

For instance, he noted that 151 of the new cases were from Hot Spring County, where an outbreak at the Ouachita River Unit state prison has infected 369 inmates.

State officials did not report any new cases at the prison Thursday, but such cases often show up in the state's overall total several days after the test is performed.

At the East Arkansas Regional Unit in Brickeys in Lee County, the number of inmates who have tested positive rose by 96, to 746, Department of Corrections spokeswoman Cindy Murphy said.

The new cases added to the statewide tally Thursday included 117 in Washington County, 98 in Pulaski County, 75 in Benton County, 55 in Sebastian County, 35 in Faulkner County and 23 in Crawford County.

Calhoun County reported its first case, meaning the virus has spread to all 75 of the state's counties.