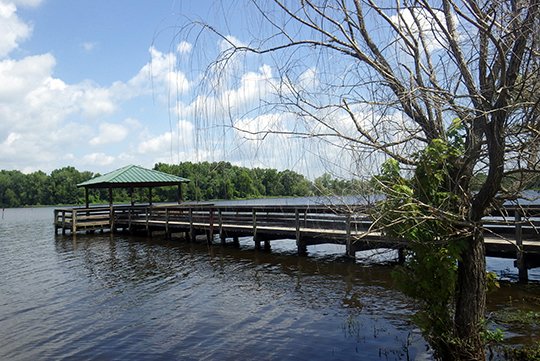 MORRILTON -- The Arkansas Game and Fish Commission has lifted a health advisory warning against swimming in and allowing pets and livestock to drink from Lake Overcup.

The harmful algae bloom advisory was issued in late May after tests in some portions of the lake showed high levels of cyanotoxins. Recent tests confirmed this toxin level has dissipated, and the advisory has been lifted.

Matt Schroeder, fisheries management biologist for the AGFC, said the advisory may have confused some anglers who became concerned about any health effects of eating fish from Lake Overcup.

"We saw a dramatic decrease in the number of anglers at the lake since the advisory was issued," Schroeder said. "But even when a lake has a harmful algae bloom advisory, fishing and eating properly cooked fish from the lake is safe. The toxins are more of an issue for swimmers, paddlers, and people's pets and livestock that may drink from the water directly."

Cyanobacteria, which causes the toxin during seasonal blooms in some fisheries, is a natural component in nearly all lakes and rarely causes any issues unless the right conditions are met.

The Arkansas Game and Fish Commission has selected 23 Arkansans to participate in the 2020 annual public land elk hunt.

The hunters were randomly drawn from 5,275 applicants who applied in May through a third-party vendor. Wes Wright, elk program coordinator for the AGFC, said this is the same system used for deer, turkey, waterfowl and alligator permit drawings.

"We always like to draw these permits on stage at the Buffalo River Elk Festival in Jasper, but this year the festival was canceled due to covid-19," Wright said. "We hope to go back to the old system next year if conditions allow it."