Walmart, Humana to team on testing 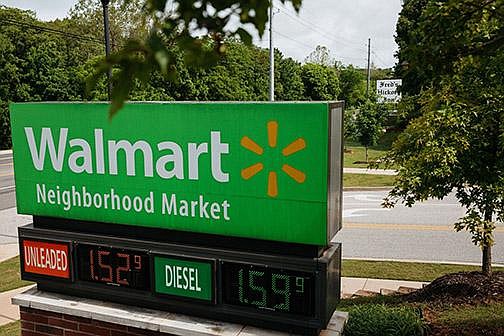 Fuel prices are displayed in May outside a Walmart Neighborhood Market gas station in Bentonville. A company spokeswoman said the Neighborhood Market testing sites will be prioritized based on community demand and where they can have the biggest effect. (Bloomberg News/Terra Fondriest)

Choosing sites for the testing sites will be prioritized by community demand and where they can have the most impact, Walmart spokeswoman Marilee McInnis said. Walmart has 686 of its smaller-format Neighborhood Market stores in the U.S.

Several of the new sites already have opened as part of a pilot program, and Walmart plans to add hundreds more through August, Humana said in a news release.

Walmart's chief medical officer, Thomas Van Gilder, said in the release that Walmart has a goal to make covid-19 testing convenient and accessible to as many communities as it can.

The Bentonville-based retailer currently has more than 280 testing sites in Supercenter and Sam's Club parking lots across the country. As of Monday, it had tested nearly 123,000 people, the company said.

Pharmacists provide the testing kits through the drive-thru window tray and observe as people perform the nasal swab themselves. Patients then seal the swab in a container and plastic bag, which they place in a drop box as they pull out of the drive-thru lane.

A courier for Quest Diagnostics picks up the samples, which are analyzed at its labs. Quest delivers test results within an average of two days, according to Walmart's website.

Humana members with Medicare Advantage, Medicare Supplement, Medicaid and employer group plans through Humana are eligible for the tests at no cost, Humana said in the release.

The insurer said it is also offering a home testing kit made by LabCorp. After taking an online coronavirus risk-assessment screen based on Centers for Disease Control and Prevention guidelines, Humana members can choose to take either the drive-thru or home test.

"Our members continue to be worried about covid-19, including the anxiety of possibly having it and not knowing it," said Mona Siddiqui, Humana's senior vice president of clinical strategy and quality. "We want to help alleviate that stress. This is an additional step we can take to help address their concerns."

McInnis also said Tuesday that the federal government's recent decision to close the last of the drive-thru testing sites it funded won't affect any of Walmart's testing centers. The retailer says it freely offers the parking lot space and covers the cost of site supplies and testing materials. Also, its pharmacists volunteer their time collecting the test samples.

"We continue to look at other ways to expand testing by partnering with [the Department of Health and Human Services], states, labs and insurance companies in order to serve our communities during this time," McInnis said.

Walmart Chief Executive Officer Doug McMillon told President Donald Trump in March that the company would work with the federal government to offer drive-thru testing for the virus in its parking lots.

The retailer opened its first two pilot testing sites within two weeks of that meeting, and quickly expanded the program nationwide. These sites supplement testing conducted by hospitals and state governments.