Economic growth in 2020 in Northwest Arkansas expected to be better than 2019's, forecast says 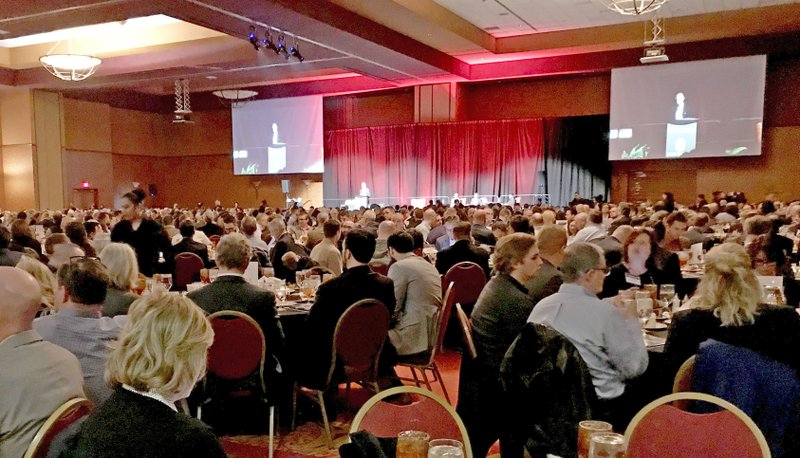 The annual Business Forecast Luncheon was held Thursday at the John Q. Hammons Center in Rogers. Northwest Arkansas can look forward to a better economy in 2020 than 2019, according to the regional forecast. (NWA Democrat-Gazette/Doug Thompson)

ROGERS -- The national economy faces a strong risk of a brief slowdown within the next year and a half, but Northwest Arkansas is poised for more economic growth this year than last, according to forecasts given Thursday at the annual Business Forecast Luncheon at the John Q. Hammons Center.

Northwest Arkansas can look forward to a better economy in 2020 than 2019, according to the regional forecast.

"It makes me feel blessed to be in Northwest Arkansas," said Nathan Gairham, president and chief executive officer of United Bank. "Sound like we're well-positioned."

Gairham was one of about 1,000 people attending the event sponsored by the Center for Business and Economic Research at the Sam M. Walton College of Business at the University of Arkansas.

The biggest new risk to the world economy, the United States included, is the coronavirus outbreak in China, according to Constance Hunter, chief economist at KPMG LLP, a business advisory and professional services firm. The firm is based in the Netherlands, and its U.S. headquarters is in New York City.

Expect the Federal Reserve system to react quickly if the economy faces a setback from the virus outbreak, Hunter told the group. She doesn't expect an economic downturn to be either harsh or long-lasting. Still, the best-case forecast is slow growth nationally because of other factors, she said. Durable goods orders from manufacturers are slowing while auto loan and credit card delinquent payments are increasing.

"Auto consumption has flat-lined," she said. There's a risk of recession within the next 18 months, she said.

Slower growth in the population is one factor in the economy slowdown, according to Hunter. The national birth rate is down. Immigration is down. Meanwhile, death rates are up. Particularly notable were "deaths by despair," a lowering life expectancy caused by overuse of painkillers, alcohol and generally unhealthy lifestyles. These factors cause avoidable deaths.

Hunter and Manuel Balmaseda, chief economist for Cemex, called trade wars and other direct government intervention in markets "distortions" to the economy that slow growth. Cemex is a multinational building material supply company based in San Pedro, Mexico.

Manufacturing is already in a recession worldwide, Balmaseda said. Among other factors, he said, "China and the U.S. had a fight." Their manufacturers suffered and the rest of the world suffered because of it. Service industries continued to grow, however, so overall there was economic growth, he said.

Economic forecasting is getting more unpredictable, not less, because of direct government intervention in economics. "Political economy is dominating economic policy," he said.

The U.S. isn't the only country to elect an economic activist as head of state and their decisions based on their competing interests is distorting the market, he said.

In Northwest Arkansas, wages are increasing because of very tight demand for workers, said Mervin Jebaraj, director of the Center for Business and Economic Research. The state as a whole has defied the overall downward trend in manufacturing, with that sector growing in Arkansas.

"We've always outperformed the rest of the U.S. economy," Jebaraj said. "At the end of the day, people still need groceries and still need trucks to move things."