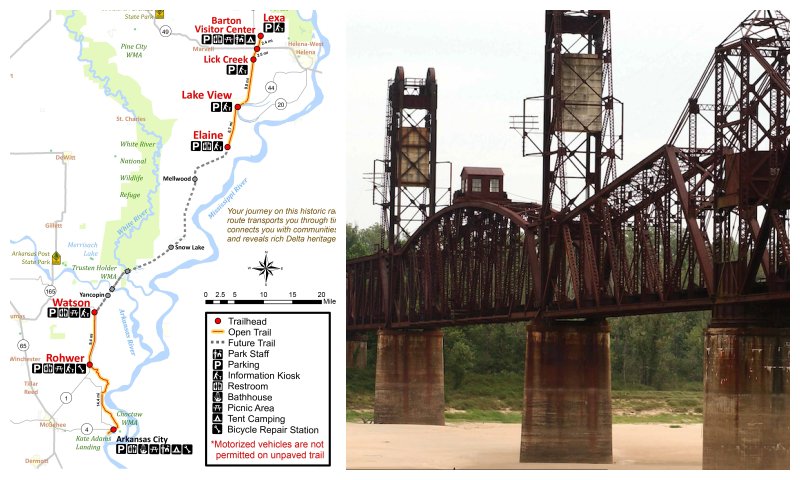 At left, a map of the planned Delta Heritage Trail. At right, the Arkansas River bridge at Yancopin that it will cross. (Courtesy Arkansas State Parks)

HELENA-WEST HELENA -- The last undeveloped sections of a planned 84-mile bike-and-pedestrian trail weaving through the Arkansas Delta's hardwood forests, agricultural lands and oxbow lakes will be completed over the next five years as the result of a public-private partnership with the Walton Family Foundation, officials announced Thursday.

The $40 million investment will be split between federal grants obtained by the state and a $20 million matching grant from the foundation, Gov. Asa Hutchinson's office announced.

Together, the money will be used to develop a roughly 40-mile stretch of trail connecting two completed sections of the Delta Heritage Trail.

When complete, the trail will stretch from Lexa to Arkansas City, spanning both the Arkansas and White rivers along its route. The governor expects the trail to create 600 jobs and increase tourism revenue.

The trail's plan was approved in 1997 and almost 45 miles are complete, according to the governor's office.

"We're connecting the middle," said Grady Spann, the director of the Arkansas State Parks agency. "That's the key to the success of this trail. If it's not connected, it doesn't work."

Among the challenges in connecting two sections will be converting old train trestle river crossings for use by cyclists, Spann said. A portion of the new trail also will pass through White River National Wildlife Refuge, home to dozens of bird species and a large population of black bears.

Hutchinson, who rode a bike over portions of the trail early in his administration, praised the trail for its "beautiful canopy" of hardwood timber.

"You see eastern Arkansas as it might have been hundreds of years ago," the governor said. "There's a beauty to it, but it's also very flat, which is nice if you don't like the hills." The governor is from Northwest Arkansas.

Jim Walton, a member of the foundation, said the trail "will connect the region's expansive natural beauty and create new ways to experience its unique cultural offerings."

"This joint effort is a dream nearly 30 years in the making, a bold idea now being realized in a community that, with continued support, can reach its enormous, untapped potential," he said.

The foundation partnered with public authorities to develop the 37-mile Razorback Greenway in Northwest Arkansas. Karen Minkel, the home-region program director at the Walton foundation, said the organization has been committed to building "momentum" in expanding Arkansas' network of walking and cycling trails.

"It's really grounded in this idea that it can be catalyst for economic development," Minkel said. "It showcases our access to natural beauty and we think that's something that's unique to this state."

Secretary Stacy Hurst of the Parks, Heritage and Tourism Department called the project a "monumental addition" to the trail system and Arkansas' efforts to be seen as a "cycling state." State money for the project will come primarily from federal grants in addition to state grants and income from the conservation sales tax, she said.

"This is the kind of trail that, once complete, will be seen across the country as a true asset for cyclists," Hurst said.

Armed with a Santa Cruz-brand mountain bike Thursday, Mitchell Allen, a recreational-planning specialist at the Nature Conservancy in Little Rock, was preparing for a ride along the northern section of the pathway as he listened to the governor reveal the expansion. With his daughter just entering cycling, Allen said, the trail's level terrain would be an attractive destination for longer bike rides.

"Gravel riding is huge right now and blowing up currently, still getting bigger and bigger," Allen said. "I think to have an 80-mile trail that I can actually ride all the way up to Memphis on the Big River Trail after that, I think will definitely attract people."

The 73-mile Big River Trail atop the Mississippi River levee extends from Memphis to Marianna, where its southern terminus is about 22 miles from the trailhead of the Delta Heritage Trail.

One frequent user of the trail, U.S. District Judge Brian Miller of the Eastern District of Arkansas, was also on hand Thursday to laud the benefits of the trail for Helena-West Helena, where his chambers are. Miller said he trained for two marathons along the trails, which he said are especially attractive during the spring bloom and autumn colors.

"It's beautiful, it's beautiful," Miller said. "And I can't believe that there are many places in the country that would be as beautiful as this."