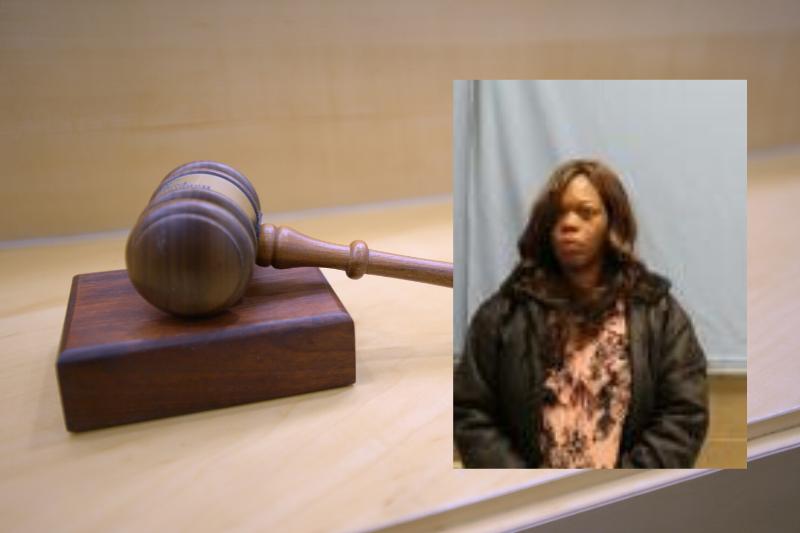 A 33-year-old Little Rock woman arrested with a spent bullet casing in her bra after a September 2018 drive-by shooting has been sentenced to seven years in prison.

Sentencing papers filed Monday by deputy prosecutor Christy Bjornson show that Candayce Tabron pleaded guilty to being a felon in possession of a firearm and two counts of unlawful discharge of a firearm in exchange for Pulaski County Circuit Judge Herb Wright sentencing her to prison. Each charge was a Class B felony that carries a 20-year maximum sentence.

Under the conditions of her plea agreement, negotiated by defense attorney Ron Davis, a third felony unlawful-discharge count was dropped, as were misdemeanor counts of endangering the welfare of a minor and assault.

Court records show that Tabron was arrested Sept. 13, 2018, at her home at 2311 Cumberland St., 18 minutes after Brittany Bradshaw, 27, called police to report that Tabron had just pulled up in front of Bradshaw's home at the apartments at 2001 Main St. and fired shots at her and her 8-year-old son shortly before 2 p.m. No one was hurt.

Bradshaw told police that her problems with Tabron, a mother of two, had begun the previous day when Bradshaw's son had been threatened by Tabron's 8-year-old son at Rockefeller Elementary. Tabron's son was suspended after Bradshaw complained to school administrators, Bradshaw told police.

Shortly before the shooting, Bradshaw told investigators, she was picking up her son from the bus stop when Tabron appeared and confronted her about the boy's suspension.

Bradshaw said she took her son and went home, but Tabron, driving a black Jeep, pulled up outside her apartment to further accost her.

Tabron tried to pepper-spray her, Bradshaw said. A bit of the spray got on her shirt, but most of it hit Tabron's two children who were in the Jeep with her, Bradshaw told police, describing how Tabron's children, ages 13 and 8, screamed in pain from the effects of the spray, court files show.

Tabron drove off but told Bradshaw that she would be back, and Bradshaw called the police. Before officers arrived, Tabron, still with her children, drove back and fired three shots at Bradshaw and Bradshaw's son. Two neighbors, Bernard Gatewood, 57, and a 9-year-old boy, were near Bradshaw and in the line of fire, according to a police report.

Through its license plate, police traced the Jeep, which was owned by Tabron's grandmother Carol Tabron, to the Cumberland Street home and arrested Candayce Tabron. Police collected a 9mm shell casing from the shooting scene and found a second 9mm casing in Tabron's bra when she was searched after her arrest, according to a police report.

Tabron was on probation at the time after entering a guilty plea to robbery in November 2014. That plea was related to her arrest for biting the owner of Beauty Sensations, at 3410 W. Roosevelt Road, after Tabron was caught shoplifting hair extensions.

Yong Jin Song struggled with Tabron, who also hit him in the head, but let her go after she threatened to get a gun out of her Jeep and shoot him, according to police reports.

Tabron was not arrested immediately, court filings show. It was only after she and an unidentified man returned to the store about a week later and was reported for shoplifting again that police learned her identity and got an arrest warrant.

In 2018, Tabron was identified by Little Rock police as the last person known to have seen alive 38-year-old Joseph McCardell of Little Rock. McCardell was found shot dead in his bedroom at his West 18th Street home in January 2013.

The last time any of his friends and family had heard from him was about 10 hours before his teenage daughter found his body. Police said his face had been bruised and marked as if he'd been pistol-whipped and that his pants pockets had been turned inside out as if he had been searched. His bedroom also appeared to have been ransacked, according to police reports.

The night he was killed, McCardell and a friend had gone to Jazzy's nightclub on Asher Avenue about 11 p.m. where McCardell talked to several women, an arrest affidavit states.

The friend told police that McCardell got a phone call from a woman and left the club with her. McCardell called the friend about 2:28 a.m., saying he was in a car somewhere in a South End neighborhood waiting for a woman who was trying to buy some cocaine.

McCardell's truck was found in the 2200 block of South Scott Street, about a block from Tabron's Cumberland Street home.

Police arrested Tabron's former boyfriend Antwon King, 33, of Little Rock in July 2018 on murder charges, but the case was dropped a few months later. Tabron was never charged in the case.

According to King's arrest affidavit, witnesses told police that McCardell had been seen with a woman named Candayce at the club, and McCardell's cellphone records showed calls to Tabron.

Tabron told detectives that she knew McCardell and confirmed that she spoke with him several times by phone, including while he was at Jazzy's. Tabron said she had picked up McCardell in the club's parking lot and that they ended up driving to a home in Sunset Terrace where she tried to buy drugs.

She told police she dropped off McCardell at his house and went home to bed, but investigators stated that they could prove she didn't go home right away, as she told detectives, according to the affidavit.