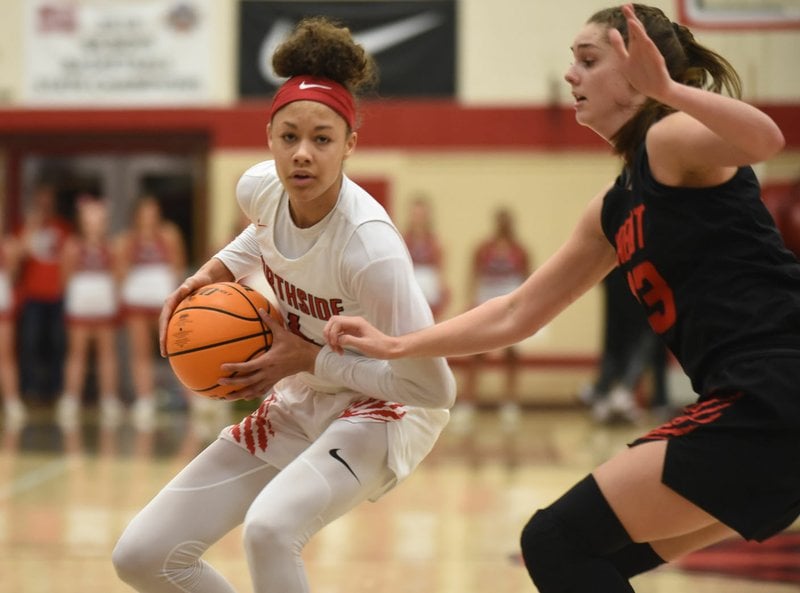 Fort Smith Northside's Jersey Wolfenbarger (4) drives to the lane Tuesday, Jan. 28, 2020, against Cabot during the first half in Kaundart-Grizzly Fieldhouse at Northside High School in Fort Smith. Visit nwaonline.com/prepbball/ for a gallery of photographs from the game and nwadg.com/photos for today's photo galleries. (NWA Democrat-Gazette/David Gottschalk)

FORT SMITH -- Fort Smith Northside showed again there is a huge gap between the first- and second-place teams in the 6A-Central Conference.

Cabot began the night tied for second place in the 6A-Central with Conway, a team Northside whipped 75-56 last week in Fort Smith. Conway led Northside 23-16 after one quarter in that game, but Northside led but all but the first few minutes against Cabot.

Cabot (16-3, 4-2) couldn't keep up the pace despite a fine effort from guard Izzy Arnold, who made a trio of 3-pointers and finished with 13 points. Nine players scored at least two points for Northside, which led 35-18 at halftime and 52-29 after three quarters.

Northside got quickly into transition, including a handful of times when a Lady Bear threw downcourt after grabbing a rebound. Haitianna Releford provided an early spark with a rebound basket, followed by a steal and a layup to give Northside a 16-6 lead with 2 minutes, nine seconds left in the first quarter.

"(Releford) was very active," Smith said. "She got some second-chance points with rebounds, got some steals and made some great full-court passes. She's a very athletic kid."

Jazz Coleman added a basket before Northside's biggest stars began to heat up from outside. Wolfenbarger hit a 3-pointer in the second quarter, followed by two 3-pointers from Bershers. Wolfenbarger and Bershers opened the second half with baskets before Bershers made her fifth 3-pointer of the night to help Northside to a 54-29 lead after three quarters.

The Lady Purple Bulldogs finished the third quarter on a 14-3 run and pulled away for a 6A-West Conference road win.

Har-Ber went on 15-5 run over the final 6 minutes of the third quarter then held off Rogers to earn a win in Wildcat Arena.

The Lady Wildcats (15-4, 5-1) never trailed, but their third-quarter run helped turn a one-point lead into a 42-31 cushion. Rogers (12-7, 3-3) did get within 52-49 on a Presley Risenhoover bucket with 1:30 remaining before Har-Ber closed out the game with a free throw by Pacious McDaniel and two more by Maddux McCrackin.

Caylan Koons led the Lady Wildcats with 16 while McDaniel added 11. Gracie Carr had 16, and Aubrey Treadwell added 11 for Rogers.

Van Buren owned a 16-8 lead after one quarter and continued to build to it as the Lady Pointers picked up their first 6A-West win of the season.

Bentonville jumped out to a 23-3 lead after one quarter and remained unbeaten in 6A-West play with a win in Tiger Arena.