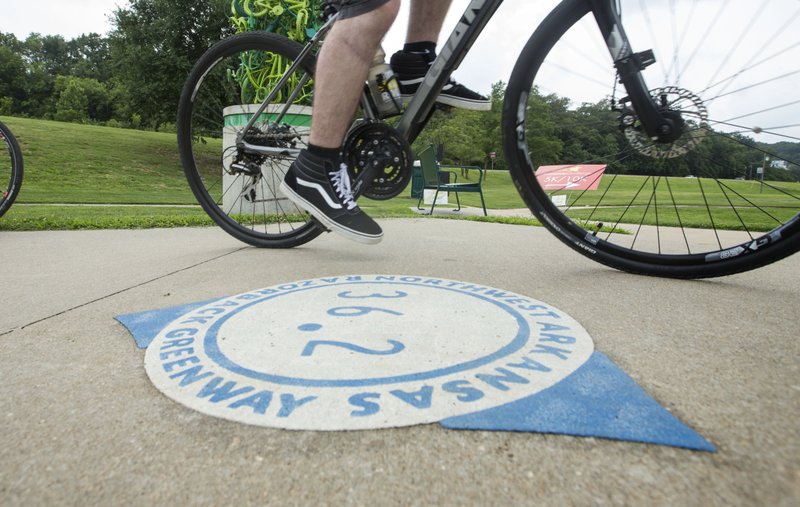 In this June 22, 2019 file photo, a cyclist passes a Razorback Regional Greenway mile marker on the Lake Bella Vista trail in Bentonville. - Photo by Ben Goff

BELLA VISTA — The City Council approved a license agreement with the Bella Vista Property Owners Association for an extension of the Razorback Greenway along Euston Road to Commonwealth Road during its Monday meeting.

Mayor Peter Christie explained that this greenway section will travel through Blowing Springs and follow Euston Road to Commonwealth Road, ending at Metfield.

The project is funded by a Walton Family Foundation grant that will cover this spur as well as a section to be attached to the Mercy Way bridge expansion project, he said. The first $2,208,611 phase of the grant was accepted by council during the Dec. 16 meeting.

The POA has not currently adopted this agreement, he said, but is expected to. The city is adopting the agreement first because the POA’s meeting is later on the calendar, he said.

Community Development Services director Doug Tapp said the city will hire an engineer to oversee construction on the project.

Bella Vista resident Sandy Fosdick spoke during the meeting’s public input session and said she’s concerned because the greenway segment appears to be near the Brittany golf course, which could pose a safety hazard.

“We hit a golf ball and hit somebody on that trail, we’re going to be sued,” she said. “I think it’s a huge liability issue that’s going to blow up on us.”

Christie said that this agreement is a license agreement to use POA land for the project, but does not approve any specific construction plans.

“This is not approving the construction,” he said. “We’re far away from that.”

Council member Steve Bourke said during last week’s work session that it’s important to note this project is for a paved path for pedestrian and human-powered traffic. Trails have been a contentious subject, he said, and he doesn’t consider this a trail.

“This is a hard surface — it’s a sidewalk. It is not more trails and I think we need to be accurate about that,” he said.

During the regular meeting Bourke said he believes the proposed greenway extension will be an amenity with a wider user base compared to the existing soft surface trails, which appeal to hikers and mountain bikers with a certain amount of skill.

This paved path will allow people to exercise and travel, with the final product allowing access to the businesses in Sugar Creek Plaza, he said.

“I see this project as being pro residents and pro business,” Bourke said.

The council also tabled revisions to the city’s employee handbook and approved the reappointment of Cuyler Scates to the Board of Construction Appeals, a $55,000 amendment to the 2020 city budget to cover a security fence project for the police and fire departments and a resolution designating disbursing officers and municipal depository board for 2020.