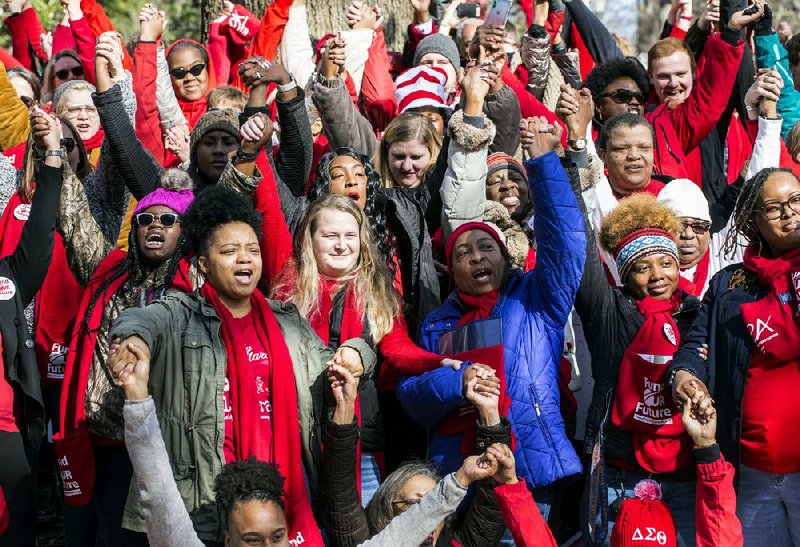 Educators and supporters raise their hands as they chant for more school funding Monday during a Virginia Education Association rally at the state Capitol’s Bell Tower in Richmond.

Father arrested in deaths of 5 infants

WOODLAND, Calif. -- A California father has been arrested in the decades-old killings of five of his infant children, a case the sheriff said had haunted his agency for years.

Paul Perez, 57, was arrested at a state prison in Delano, days before he was expected to be released on unrelated charges. He is suspected in the deaths of the children born between 1992 and 2001.

Authorities started investigating after the decomposed remains of the child recently identified as 3-month-old Nikko Lee Perez were found in 2007 in a sealed, submerged box in an irrigation slough near Woodland, Calif., about 80 miles northeast of San Francisco.

An autopsy found he died of blunt force trauma.

The remains were identified in October after authorities used an expanded DNA database that they had not used before on the cold case. State Department of Justice officials previously had been checking a more limited DNA database weekly for direct matches.

Perez is charged with five counts of premeditated murder with special circumstances of lying in wait, torture and multiple victims.

RICHMOND, Va. -- Virginia officially became the critical 38th state to ratify the Equal Rights Amendment on Monday, clearing the way for likely court fights over whether the measure can be added to the U.S. Constitution.

State lawmakers made history earlier this month when each chamber of the General Assembly separately approved ratification resolutions. On Monday, the House and Senate took the final procedural step of signing off on each other's measures.

Virginia's ratification opens a new chapter in the nearly century-long push to get the amendment added to the Constitution. Constitutional amendments must be ratified by three-quarters of the states, or 38. But the ERA's future is uncertain, in part because of a 1982 deadline for ratification that Congress passed decades ago.

Earlier this month, the U.S. Justice Department issued a legal memo concluding that because the deadline has expired, it is too late for states to ratify the ERA. The only option for supporters now is to begin the ratification process all over again in Congress, the department said.

ERA supporters argue that because the deadline was included in a preamble of the amendment, it is not legally binding. There's also a push in Congress to remove the deadline. Legal scholars expect the issue will likely be resolved in the courts.

MEMPHIS -- A federal appeals court has sided with a lower court in rejecting a lawsuit that challenges the security of voting machines in Tennessee's largest county.

A three-judge panel of the 6th U.S. Circuit Court of Appeals on Friday upheld a September district court ruling against the Shelby Advocates for Valid Elections lawsuit.

Appellate judges wrote that the plaintiffs failed to show that there's an imminent risk that people will hack voting machines in the county. The court rejected the lawsuit's citing of a separate case that required a county in Georgia to replace its identical voting machines after they were hacked twice.

"But even if we agreed with the court that examples of hackers disrupting those particular voting machines showed an imminent harm somewhere in Georgia -- or for that matter anywhere in the United States -- that does not translate into an imminent risk that individuals will hack the voting machines in Shelby County, Tennessee," the ruling states.

The Shelby advocacy group had sued for a switch to handwritten ballots and a voter-verifiable paper trail, arguing that outdated touchscreen voting machines used in the Memphis area aren't secure, and more safeguards are needed to shield the system from outside manipulation.

JACKSON, Miss. -- An inmate was found dead in his cell at a privately run prison in Mississippi over the weekend, among the latest inmate deaths in a state that's seen at least a dozen in the past month.

"There were no initial signs of foul play," Arnita said in a statement.

Tyler was serving a life sentence on a capital murder conviction from Rankin County.

At least a dozen inmates have died in Mississippi prisons during the past month. Many of the deaths happened during outbreaks of violence, and prison officials have attributed some of the violence to clashes between gangs.

More than two dozen inmates sued the state Jan. 14, saying understaffed prisons are "plagued by violence" and inmates are forced to live in decrepit and dangerous conditions. Entertainers Jay-Z and Yo Gotti are paying for the attorneys in the case, a spokesman for the two confirmed. 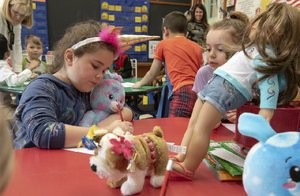 Photo by AP/Sun Journal/Russ Dillingham
Juliana Ramsey (right) looks over at classmate Myah Repetti on Monday in their first grade class at St. Dominic Academy in Lewiston, Maine, during the first day of Catholic Schools Week.