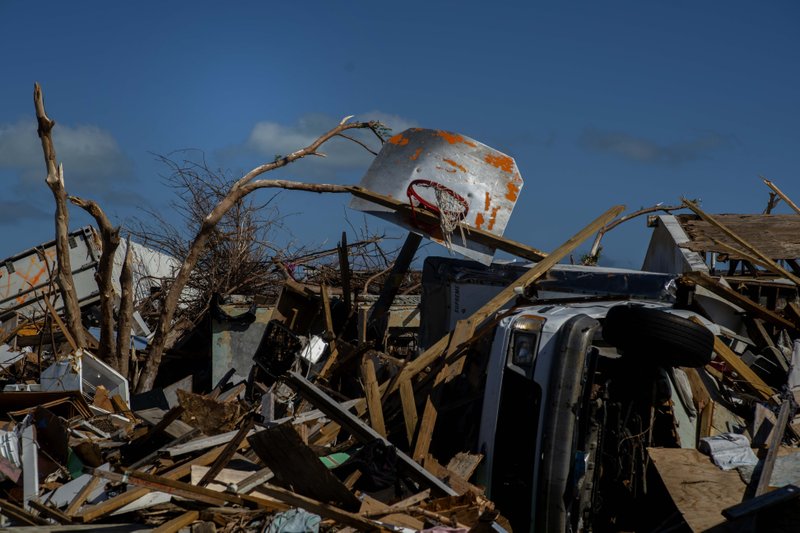 FILE - In this Sept. 27, 2019 file photo a basketball board is seen next to a car among the debris left by Hurricane Dorian, in a neighborhood destroyed by the storm in Abaco, Bahamas. Any concern about whether it was appropriate to be playing sports in the Bahamas while parts of the multi-island nation continue to recover from the effects of the storm was quickly dispelled by officials. Officials are hoping tourism and upcoming sporting events aid recovery efforts by boosting the economy to pay for reconstruction and raising awareness for people to donate or volunteer for ongoing work. Participants in those events _ including the eight-team Atlantis tournament opening Wednesday, Nov. 27, 2019 are also helping in the recovery. (AP Photo/Ramon Espinosa)

FAYETTEVILLE -- The on-screen satellite images gave a detailed view of the damage caused by Hurricane Dorian.

"Out of the entire neighborhood I was looking at, there wasn't a house standing," said Cassie Howe, a first-year doctoral student in the Department of Geosciences at the University of Arkansas.

Howe and other UA volunteers pored over images of the storm-battered Bahamas in September, part of a team response to natural disasters making use of data from satellites orbiting the Earth.

An international charter agreement hashed out in Vienna just over 20 years ago allows for sharing images and radar data after a natural disaster. Space agencies from several countries and now some commercial satellites contribute information. Technical experts -- often far from the affected region -- work to precisely identify the geographic areas hardest hit by storms, wildfires or earthquakes.

The storm caused widespread damage to the Bahamas, a country of several islands east of Florida. The government in November reported an official death count of 70, with others still considered missing.

Marking the most damaged locations precisely and then sharing data helps the emergency responders on the ground decide where they need to go, said Brent Yantis, who from Louisiana coordinated expert teams, including at UA, for the hurricane response activated through the charter.

Howe, 23, described seeing the images of devastation as "a bit emotional." She said she volunteered to help, and the project let her do so by using the type of technology and techniques that she's in school to study.

"I think it's cool that you can use something remote like that to help other people," Howe said.

But, in the U.S., data often gets funneled to experts who are a part of AmericaView, a consortium devoted to what's known as remote sensing, a term NOAA describes as "the science of obtaining information about objects or areas form a distance, typically from aircraft or satellites."

AmericaView, a non-profit organization, receives money from the Geological Survey and does education and outreach efforts.

State-based organizations part of AmericaView help with the organization's mission. They can also be asked to volunteer with a disaster response.

Jason Tullis, a UA geosciences professor, leads ArkansasView. Tullis, who joined UA's faculty in 2004, said he worked in the 1990s as a wildland firefighter with the U.S. Forest Service and also helped interpret of aerial photographs of forest vegetation to study fire potential.

In September, he agreed to his first "activation" under the charter, assisting as what's known as a "value adder" to the larger disaster response.

From Sept. 1-3, Hurricane Dorian swept through the Bahamas, according to the BBC. Considered a Category 5 storm based on sustained wind 185 mph, it was the most powerful hurricane to hit the island chain since record-keeping began, the BBC reported.

On Sept. 4, Tullis began his volunteer duties, but he said it took a few days to set up a team able to sift through the images of devastation.

"It takes a lot of skill and effort to interpret the imagery," Tullis said.

The challenge is to take large amounts of data and present it in a form useful without being overwhelming, Tullis said.

Once he agreed to take on his role, Tullis began seeing "literally hundreds of emails that started just flowing in, one right after the other," he said.

Within each was a link to data providing detailed images of the devastation on the ground, Tullis said.

Tullis said he spoke with "about half a dozen students." Not all could carve time out of their schedules, but four students participated, he said.

"There's nobody paying anybody. There's no exchange of money to do this," Tullis said of the effort.

The assignment was clear, to interpret satellite data.

"You're looking for splashes of junk that looks like it might have been washed up as a result of the storm," Tullis said.

Over time, water level changed and debris could be whipped about by wind, Tullis said.

"We're looking for pieces of buildings that have been washed away, and then we [using specialized software] draw a polygon on where we think the debris is," Tullis said.

But the information didn't always pan out. Clouds blotted out some visual imagery.

"They will search for archival images from prior to the disaster," Tullis said.

Teamwork, as well as expertise in using specialized software, were essential, Tullis said.

"There's more than any one person can do," Tullis said.

Howe estimated she worked between 20 to 30 hours on the project over about three weeks. She said she worked at a computer lab that's a part of UA's Center for Advanced Spatial Technologies.

"I was essentially creating GPS points, so that someone else could take the data I made and load it onto their own map," Howe said.

Tia Francis, a UA master's student, also volunteered for the project. She described how she created a "data set" of geographical boundaries for the identified debris fields. She said she spent roughly between 10 and 15 hours on the project.

"I felt like I was contributing to something and helping people understand what they were walking into, so that way they could help the victims of this even more," Francis said.

Yantis, director and coordinator for LouisianaView, as project manager relayed data from the "value adders" to the Bahamas National Emergency Management Agency and also to the Pacific Disaster Center, a research center manged by the University of Hawaii.

Yantis said it was the first time he worked on an international disaster. He said providing data about flooded areas and debris helps when there are limited resources to respond.

"They don't have the infrastructure to respond in the way that we do when we have an event in the United States," said Yantis, who works as the director of the University of Louisiana at Lafayette's Regional Application Center. Yantis said as project manager for the charter's Hurricane Dorian response, he worked with six teams who helped in some way.

The satellite images themselves are only made available because of the charter, which began in 1999 with the European Space Agency and the French space agency, Centre National d'Etudes Spatiales, signing on from the start.

By 2000, the agreement was considered operational. Last year, there were more than 40 disaster-response activations worldwide, according to a website listing the charter's activity.

Tullis said after working on the response to Hurricane Dorian, he would take part in a future disaster response and again involve UA students in the effort.

"It's a rewarding experience," Tullis said.

Howe said, "Not a lot of people get the opportunity to do what we could do, something helpful from right where we were in the lab."