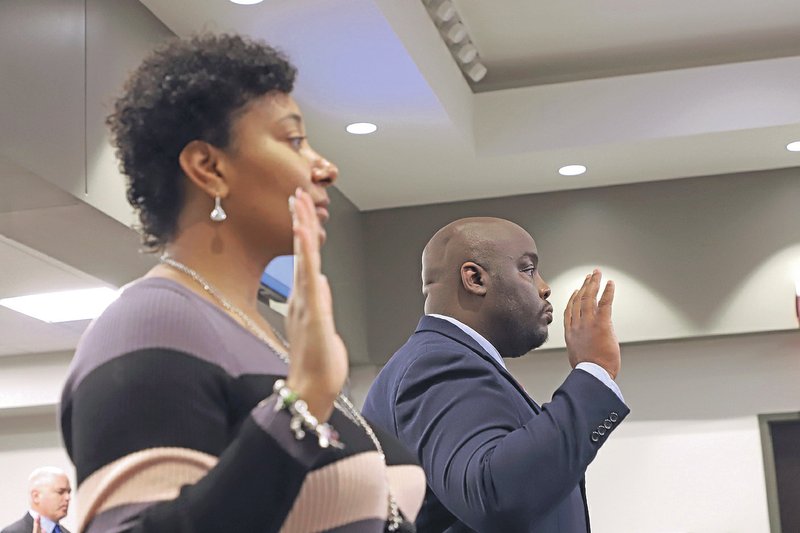 Principal/Superintendent Jeremy Cegers, (right) and Kincyl Branch, local education agency supervisor for the school, were sworn in Friday before the state Board of Education held a hearing to decide the fate of the Pine Bluff charter school recommended for closing. (Arkansas Democrat-Gazette/John Sykes Jr.)

Southeast Arkansas Preparatory High School, a financially and academically struggling charter school in Pine Bluff, will stay open at least through the end of this school year, the Arkansas Board of Education decided Friday.

School leaders, however, must report back to the Education Board in March on its efforts to resolve its immediate problems and to find a charter management organization with which to partner, the Education Board concluded. The 106-student school is to do both in consultation with the Arkansas Public Schools Resource Center, a nonprofit organization that provides financial and educational support to rural public schools and charter schools.

Education Board member Chad Pekron of Bryant made the motion to keep the school open at least through the end of the year and to use the board's March meeting to decide how to proceed for the coming 2020-21 school year.

"What happens if we close the school now? " asked Pekron, who participated in the meeting by telephone. "How would students graduate? The only worse option to keeping the school open is to close the school," he said.

Board member Ouida Newton of Leola said that while she didn't favor immediately closing the campus, she also said she can't see herself allowing the school to operate beyond this school year unless there is an organization brought in to help with management issues.

Diane Zook of Melbourne and Little Rock, the board's chairwoman, told the school leaders, "This is it. No more excuses."

The Arkansas Charter Authorizing Panel recommended in November that Southeast Arkansas Preparatory's state-issued charter to operate be revoked. That was in light of the school's F grade from the state, a failure to provide special-education services to eligible students in 2018-19 and part of this year, and its 66% of students who are in need of support in reading. Additionally, the panel learned that the school had unpaid bills, projected negative year-end balances and failure to submit required reports and plans.

The authorizing panel's call to revoke the charter went to the Education Board this month. The Education Board, swayed at least in part by emails and other appeals from parents and community members, voted at the time to conduct its own hearing on the school before making a final decision

At Friday's special meeting of the Education Board, staff members from the Elementary and Secondary Education Division provided updated information about the school. The list included a projected year-end negative balance of at least $3,414 as well as an inability to cover next week's payroll of $22,200 with the $10,883 in the school's bank account.

Agency staff members also reported that 20 of the school's 21 seniors were not on track in terms of earned course credits to graduate this spring, that reports due to the state and federal government were late or have not been submitted at all, and that school administrators have had a tendency not to respond to division phone calls and emails.

Southeast Preparatory Superintendent/Principal Jeremy Cegers, who is the school's third chief in its two-year history and has not yet received state-required two-hour training to be a superintendent, acknowledged to the Education Board "that not everything is perfect" at the school that serves students from a county that has a reputation for poverty, crime and poor education.

The school provides students with a smaller education setting, mentoring, concurrent college credit with Southeast Arkansas College and opportunities for internships with businesses.

But Cegers and school administrator Kincyl Branch, described how the school was providing compensatory special-education services after school to eligible students who did not receive required services previously.

The school's financial troubles were at least partly the result of receiving state funding for a lower number of students than actually enrolled and that the threat of the school's closure put a freeze on one or more anticipated grants to the school. The school has now changed its food service program at a large savings, as well as reduced the size of its staff.

Ken Rich of the Arkansas Public School Resource Center told the Education Board that his organization's work with the school in the past month indicates that the school will end the year with $40,000 in the bank and that the school will receive state aid this month in advance of Jan. 31, making it possible for the school to cover its payroll. He also said overdue bills have been paid with the only outstanding debt being a penalty fee of a few hundred dollars.

Education Board members asked why there are differences in financial projections for the school and about ineligibility of seniors to graduate.

Member Brett Williamson of El Dorado questioned how a new school could slide "so far off the rails" in such a short time.

Cegers said he believes that as many as 19 of the school's seniors will graduate on time once their credits from this current semester are taken into account. Additionally, there are online courses that can be made available to students now and through the summer to help achieve the necessary credits.

Supporters of the school -- lawmakers, parents and grandparents -- addressed the Education Board on behalf of the school.

Grandparent R.S. McCullough said he was proud of the progress of his granddaughters and pleased with the school's leadership, and suggested that he and others could help offset any financial deficits, if necessary.

Shamitria McCree, Karen Davis and Tonesa Adams, mothers of students -- including seniors -- also expressed satisfaction with the school and its caring staff.

Key told the state board that the Elementary and Secondary Education Division will monitor and work closely with the ninth-through-12th-grade school and will if necessary call on the board together before the March meeting if there is an emergency.

He said the absolute worst that could happen is that students would report to school one day and find the doors locked because there is no money to open.

Key also said he would not be able to sleep at night if he didn't bring up the difficulties that the state agency went through with Covenant Keepers, a charter middle school in Little Rock that closed last year, in the middle of the school year, after several years of problems and repeated hearings before the Education Board.

The state education division recently sued the founder and former superintendent of that school in Pulaski County Circuit Court to obtain the school's financial records.

"This can't become another Covenant Keepers," Key said about Southeast Preparatory High. "Please, I implore you, anybody who is working on this, because the ripple effect of that situation is still with us today, and it's been going on for about three years or so. Please don't let this turn into that situation."

Julia Taylor, a resident of the state-controlled Little Rock School District, told the board at the end of the meeting that if the Little Rock district or another traditional public school system had been the subject of the Friday hearing rather than a charter school, the outcome would have been different. She implied that it would have been harsher.

"We know you have two very different agendas," Taylor said.