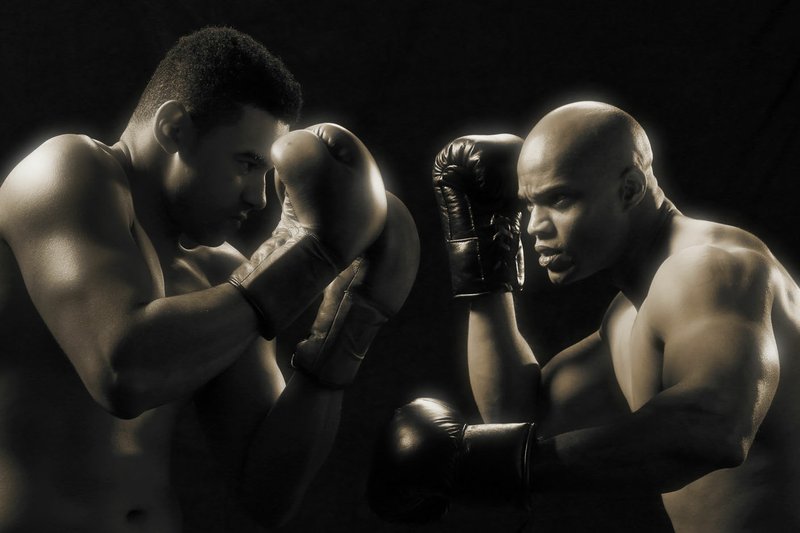 Troy Wallace (left) and Shon Middlebrooks star in TheatreSquared's production of "The Royale," opening this week and running through Feb. 16. (Photo by Wesley Hitt)

On its face, Marco Ramirez's play "The Royale" -- opening this week for a six-week run at TheatreSquared in Fayetteville -- is about the sport of boxing. The plot takes its inspiration from the life of Jack Johnson, the first African-American world heavyweight boxing champion, though it's not a direct lift of his life story. Ramirez has said in interviews he wanted to retain "poetic license" when telling the story of the fictional Jay Jackson -- a boxer "so good at the sport, they call him 'The Sport,'" says one character in the play.

"What's great about this play is that people come in and think they're going to see boxing matches -- actual punching -- but then they see that it's so stylized," says the show's director, Dexter Singleton, describing the unique staging device Ramirez uses to convey the boxing matches. Without ruining the effect, suffice it to say that a glove never makes impact with flesh, but the matches are still heart-poundingly vivid. "It really captures the rhythm of boxing, the musicality of boxing, but also the psychological side of what's going on inside a fighter's head when they're engaging in a match," Singleton goes on. When it comes to plays about sports, "it's really difficult to find that mix of theatricality that engages the sports fan as well as the non-sports fan, and I really think this play is the perfect marriage between the two."

Singleton is the executive artistic director of Collective Consciousness Theatre in New Haven, Conn., and chairman of theater at the Regional Center for the Arts in Trumbull, Conn. A director, actor and playwright, he's worked with T2 before during its Arkansas New Play Fests. On this particular day, Singleton is speaking at T2's annual open rehearsal, a once-a-season event that allows patrons a peek behind the curtain as they watch the interaction between actors and directors at a working rehearsal -- an event that, one-and-a-half weeks into the rehearsal process, says Singleton, is a bit nerve-wracking.

"As a director, it's scary having you come here and see what we're doing," admits Singleton to the 50 or so people in the audience. "We're very much in rehearsal, as you can see, so it's very scary. But it's part of the process, getting people excited [about the show]."

That anxiety is easy to understand -- an audience usually doesn't see a production until it's polished to perfection. Still, on this Sunday afternoon, it's hard to believe the cast -- none of whom has ever worked together before -- have only been rehearsing for a scant 10 days; they're off book and on rhythm. It's easy to see that the show will pack a powerhouse wallop come opening night.

"It's kind of nice, if I'm being honest," says actor Shon Middlebrooks, who plays Jay, about having folks sitting in on rehearsal. "We've been so quiet in our own little bubble of rehearsal, so to hear responses that people were getting things or to see what was landing, that's good to hear. There's always a different energy for actors when the audience is there."

Since "The Royale" is ostensibly a play about boxing, Singleton says the cast got some training in the sport by award-winning boxer Kevin Lightburn, owner of Springdale's Straightright Boxing and Fitness.

It was important, says Singleton, to get the cast "immersed in that world, as our company had not boxed before. So many people who don't know the world of boxing -- it's easy to call it a 'brutal sport' and ask, 'Who wants to get hit in the head for a living?' But Kevin really helped us understand the psychological part of it.

"To be a great boxer, you don't only have to have great athletic ability and physicality -- you also have to be really, really smart. ... He's been a fantastic teacher, such a patient teacher, and a super smart guy. He's right here, just a few minutes down the road, and he's building world champions out of that gym -- people who are fighting on ESPN, on pay-per-views and all over the world. He's committed to building up boxers here in Arkansas."

Though he had never seen the inside of a boxing ring until Lightburn showed him some moves, Middlebrooks was born to play the part of a champion boxer: With a sculpted physique and a winning smile, he's got the muscle and the charisma required to pull off the part. He says he's been a fan of the script for some time and always knew it would be a good part for him to play.

"I also think it's a beautiful story," he says. "The thing that really draws me to it is this: Men who are big and have a strong stature, you might pass them in the street and make an assumption about them. But you don't understand all of the inner workings of what's going on inside him, that he's multilayered, that he's vulnerable, that he does have a heart. This is a beautiful piece that captures and shows all of the different colors that you might not see, say, in an athlete's press conference -- but when you rip the [facade] away, there are a lot of different things going on."

There are a lot of different things going on in this play, as well: Jackson's fight to the top of his field is heroic because of his skill, certainly, but even more so because he scales the heights of the boxing world in the early 1900s, during the Jim Crow era, when virulent racism made the prospect of an African-American gaining prominence in any field a potentially dangerous concept.

The show opens with a fearless Jackson determined to demonstrate that he is peerless in the field of boxing. He wants to see results of his matches reported on Page 1 of the newspaper.

The only way to reach Page 1, says Jackson, is to fight a white man -- something unheard of at the time. It is a courageous, single-minded goal that, say some around him, leaves logic and reason behind. In fact, the event this plot point is loosely based on -- Jack Johnson's historic fight (and win) against James Jeffries, a white boxer who had retired as the undefeated heavyweight champion -- led to riotous violence against African-Americans in nearly 50 U.S. cities. History tells us that Jackson's ambition is not without dangerous consequences.

In interviews about his work, Ramirez has pointed out that Jackson's situation has echoes in today's world.

"Many of the people in this country still struggle when cultural icons make declarations that seem 'too political' for the personas they've created as artists or athletes," he notes. 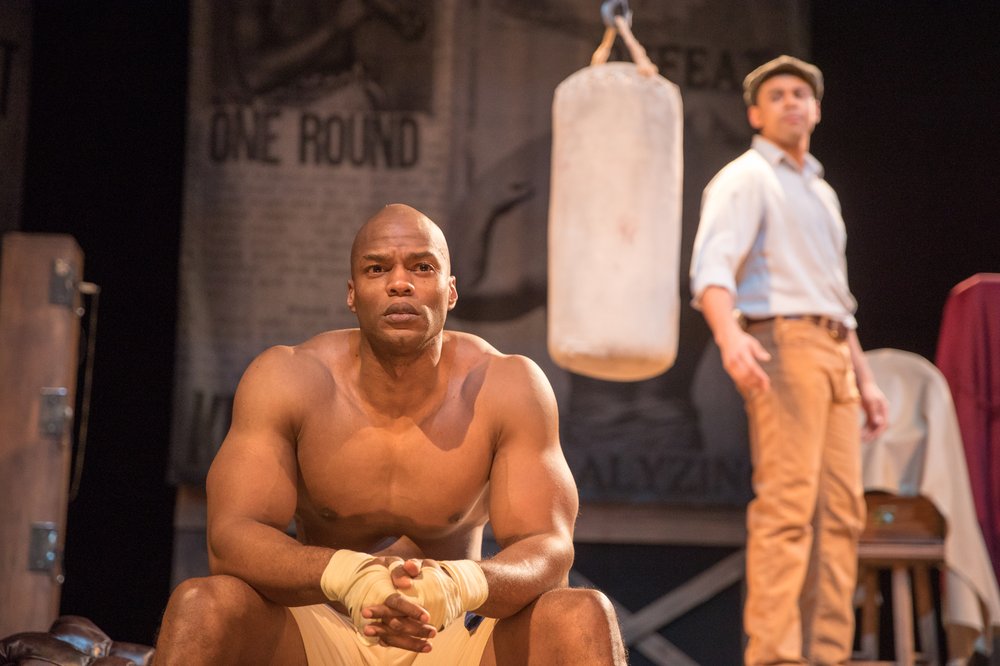 Kim Powers' clean, visually stunning set design nimbly serves the plot of the show with its outsized mirrors around the perimeter and large graphic banners that give a real sense of the trajectory of Jackson's career. (Photo by Wesley Hitt)

"We see so many things in the play that show us how far we've come, but also how far we haven't come from some of these same issues," says Singleton. "Some of these things we're talking about on stage are still things that, unfortunately, are still happening today. In some ways, we're not where we should be. There's still work to do."

Work that includes theater companies like T2 producing diverse plays written and performed by -- and about -- under-represented members of our community, he says.

"I believe in the diversity of the theater -- that's why I created [the Connecticut theater company] Collective Conscious," says Singleton. "I'm not the director who wants to just direct plays and that's it. I care about the social aspects of a play. I care about what happens when an audience member sees a play, and then goes back out into the world.

"That's why this play is so beautiful -- an audience member might see it and say, 'These things are still happening in 2020. What can I do? How can I use my influence, my privilege, my station in life? How can I use them to make the world a better place?' I always care about what happens after an audience views a play. I want it to hit them in such a way that they think about it. We pepper this whole play with things that, potentially, people can relate to in their own lives, that are happening today in 2020 -- so people can leave seeing themselves on stage.

"I also think it's important for people in this area to see themselves on stage, to see people who look like them up there," Singleton says. "I think it's important for black theatergoers and patrons to come to this space and say, 'I can look up to Shon,' or for a young black boy coming to this space and saying, 'I want to be an actor, and Shon has inspired me to do that,' or 'I want to be a director and the things that Dexter is doing are inspiring me.' It's about that legacy, and laying that groundwork that T2 is doing with this play -- it's building future generations of theatergoers and artists and people that are socially conscious."