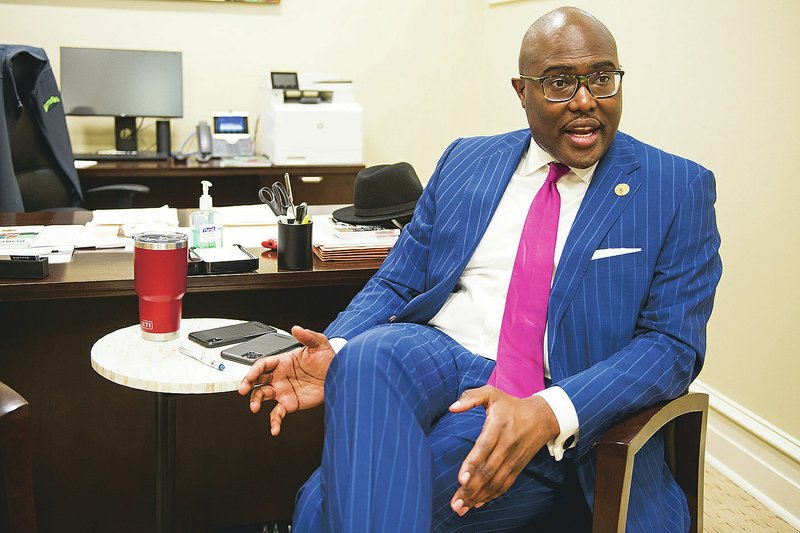 Little Rock Mayor Frank Scott Jr. talks in December during an interview in his Little Rock office. Scott, 36, often speaks in sweeping statements meant to inspire, a style emblematic of what he said his approach to 2020 will be. He said this year will be one of long-term planning and vision, with bold initiatives for the future that he referred to as "moonshots."(Arkansas Democrat-Gazette/Jeff Gammons)

Mayor Frank Scott Jr. believes Little Rock is capable of big things -- an iconic park in the heart of the city, a light rail system one day, even handling nearly twice its current population.

"We've got enough infrastructure right now that if we grew to 350,000 we would not blink," Scott said.

Scott, 36, often speaks in sweeping statements meant to inspire, a style emblematic of what he said his approach to 2020 will be. He said this year will be one of long-term planning and vision, with bold initiatives for the future that he referred to as "moonshots."

"It's things that we will begin to have some thought leadership on," said Scott, who will give his State of the City address at 6 p.m. Thursday at Heifer Village downtown. "Doesn't mean that it'll happen within the next three years, but it's things that we ought to be planning for the next 10 years, whether I'm the mayor or not.

Scott described 2019 as a "whirlwind. The year had its challenges and heavier moments, including a fatal shooting by a Little Rock police officer that led to protests and the firing of officer Charles Starks, who has since been reinstated; a teachers' strike; and split votes from the city board on measures put forward by the first-year mayor.

Ongoing legal disputes over what the city owes Starks have continued into 2020, and the Little Rock School District is set to hold board elections in November after five years under state control. Scott said he also plans to convene an investor conference to kick-start development in the city's opportunity zones and review the city's classification of positions.

Scott was sworn in as Little Rock's first popularly elected black mayor on Jan. 1, 2019, and many say he has taken a more involved approach than his predecessors.

Scott established early in 2019 that changes were in store. About two weeks into his term, Scott implemented an organizational structure at City Hall that expanded his executive authority. Scott ordered six city departments -- finance; fire; human resources; planning and development; police; and public works -- to report directly to him, rather than through the city manager.

Scott refers to the move as the "ACT plan" -- which stands for accountable, clear and transparent -- but it also meant that Scott was involved in some of the biggest things that happened in the city last year.

"I feel that what he did was appropriate for him," Ward 6 City Director Doris Wright said. "I feel that as a new mayor, he was given an opportunity to implement his ideas."

Christopher Williams, assistant professor of political science and international studies at the University of Arkansas at Little Rock, said taking a more hands-on approach allows Scott to shepherd his preferred policies through more quickly, but added that a more proactive approach to executive power "can be a double-edged sword."

"Anything the public doesn't like is solely his fault," Williams said. "If you like his policies, then you probably think it's a good thing."

One of Scott's first challenges occurred Feb. 22 when Starks, a white police officer, fatally shot Bradley Blackshire, a 30-year-old black man, during a traffic stop on West 12th Street. The shot set off a series of legal proceedings centering on whether Starks' use of force was justified and whether he should keep his job.

In March, Scott allowed residents, including friends and relatives of Blackshire, to address the city board for more than an hour, which was more than three times the usual amount of time allotted for public communication. Emotions ran high, with people demanding that Starks be arrested and ward representatives being called out for not reaching out to the community after the shooting.

At the close of the meeting, Scott said he'd prayed with Blackshire's family -- he knew Blackshire's mother, Kimberly Blackshire-Lee -- and said the city needed to "embody trust."

There have been seven fatal officer-involved shootings in Little Rock since 2014. Vice Mayor B.J. Wyrick, who represents southwest Little Rock and has served on the city board since 1995, said she had seen city officials show sympathy to the families of police officers who were hurt or killed in the line of duty, but not a situation like last year's.

"It's pretty bold for him to step in and get involved with the family," Wyrick said. "In the past, that's always been a legal matter and we've been advised not to get involved, so that was a little different, but he's a different kind of guy.

"He's a very caring person. He's a minister, a financier, a mayor, so he's probably ... driven by some different standards and goals."

Scott's involvement after the shooting drew attention when two of the city's assistant police chiefs testified last summer that the mayor had asked on the day of the shooting if Starks could be fired and that Scott had pressured police leaders about the investigation.

Scott also took two hotly debated ordinances to the city board during the summer. One called for cutting the city's budget midyear and the closure of two public golf courses, and the other proposed establishing a citizen board to review police actions and investigations.

The budget amendment cut $2.1 million and 44 city positions from the city budget for 2019. Scott said the decision to "right-size" city spending was difficult, but it was necessary to ensure that recurring expenses weren't covered with one-time funds.

Discussion about the decision lasted weeks. At-large City Director Joan Adcock, who voted against the ordinance in June, said earlier this month that the city would have been fine without the budget cuts. The city made 14 adjustments to the 2019 budget in December, many of which were increases in departmental revenue.

"Did we really need to pass it? I don't think we did," Adcock said. "That's how the city budget has always been."

At a board meeting in December, Finance Director Sara Lenehan said some of the increased revenue could be put toward employee health care.

Wyrick said she didn't feel that the board had been involved in the process of cutting the budget.

"He had some movement that he wanted to make," the vice mayor said. "With the budget amendment, he saw an issue, and he just felt compelled that it had to be done."

Wyrick said communication and trust between the mayor and board has since improved, noting that Scott had been responsive to her questions about the 2020 budget.

Adcock said the new leadership over the past year has required some adjustments.

"I think that this has been a real learning curve for him, and he did well with that," said Adcock, who has served on the board since 1993. "His leadership style is that of a 36-year-old, and I'm a bit older than that."

Adcock said in some ways she had found previous Mayors Mark Stodola and Jim Dailey easier to work with, but it depended on the issue.

"I think he's having a hard time involving us for whatever reason," Adcock said of Scott's relationship with the board. "I don't think he's involved us as much as the other two."

Asked about working with the city board, Scott paraphrased the 16th century philosopher Niccolo Machiavelli.

"I think Machiavelli shares that change is the most difficult task when you're trying to initiate a new order, and so with change it takes time. It takes some adaptation," Scott said. "But we have a wonderful city Board of Directors, of committed servant leaders who are all committed to the citizens of Little Rock. So it took time.

"They were under a mayor for 12 years prior to me. Many of them have been on the city board for close to 30 years, and with anything -- I'm a different type of leader than the former mayor -- and so you get used to one style of leadership and now there's a new style of leadership, and so that takes time to adapt."

Half of the 10 city directors opposed the ordinance establishing the five-member Citizen's Review Board, which is in charge of reviewing police actions and investigations in the areas of corruption, discrimination and use of force. Before their work begins this year, the panel will receive training from Police Chief Keith Humphrey, as well as City Attorney Tom Carpenter and a U.S. Department of Justice official.

The Little Rock Fraternal Order of Police also opposed establishing the review board. Ronnie Morgan, the organization's president, said he is reserving judgment on the new panel.

"We still don't know how it's going to work," he said.

Morgan said the police union has not agreed with all of Scott's actions, but he noted that the mayor has maintained an open line of communication.

"I can say that we've had meetings with the mayor and our concerns have been heard," Morgan said. "Anything we've had concerns [about], he's been open and listened to them whether we agree or not."

Tensions between the Arkansas Department of Education, which controls the Little Rock School District, and the Little Rock Education Association reached a breaking point in the fall that ultimately resulted in the union organizing a teachers' strike Nov. 14.

Scott said he campaigned before becoming mayor that the city would engage in educational affairs because schools connect to the city's growth. In October, he pitched that the city, state and district work together to turn schools that had received F grades into community hubs with social services for students in need.

Scott's idea was supported by the state Education Board, which plans to return the district to limited local control in November.

Some city directors praised Scott's involvement with the school district. At-large City Director Gene Fortson commended Scott during a November board meeting for using his role as mayor to publicly support the district. Others have expressed support for the "community schools" model.

Wright, who represents Ward 6, said the model was essentially what she made an effort to do in her ward at Henderson Middle School. The school has an F grade from the state, but students have access to out-of-school services such as transportation and grant-funded literacy tutoring at the nearby West Central Community Center.

When asked in December what's on deck for 2020, Scott raised his eyebrows.

Task forces looking into the future of the Little Rock Zoo and the former golf courses at War Memorial and Hindman parks have already presented their recommendations to the city board. Both groups said new funding streams will likely be needed to make the improvements outlined within the recommendations.

Scott said in December that he had not made up his mind on whether he would pursue a campaign for a new city sales tax, saying he was aware that many nearby cities tax their residents at higher rates.

"I think it's not unnoticed or foreign that many of the cities that are contiguous to Little Rock, they're at least a penny, some close to two pennies, higher than the city of Little Rock," Scott said.

Williams, the UALR political science assistant professor, said Scott appeared to have spent the past year listening to the public and would likely spend the coming year building on that information.

"He's done things a little differently than what we normally see," Williams said. "He's been very engaged in listening to the public. I think that's something that not many people have done."

Ronnie Jackson, president of the East Little Rock Neighborhood Association, said he appreciated seeing Scott share his thoughts at a meeting with different groups about needs in that area.