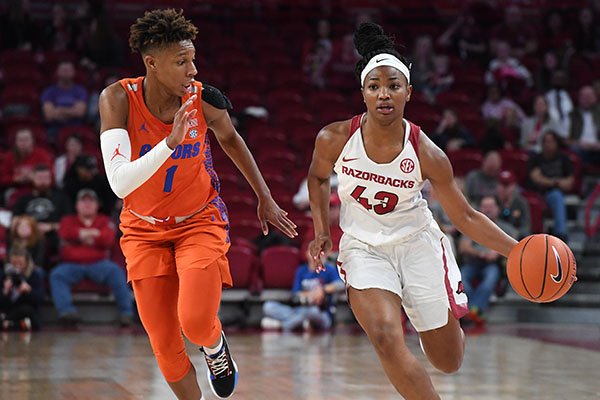 Point guard Makayla Daniels poured in a game-high 19 points, including 10 to start the fourth quarter, to help the No. 21 Razorbacks roll to a 79-57 SEC win in front a vocal crowd of 4,020.

Newbauer’s strategy was to emulate Georgia, which limited the Arkansas three to 29 points — far below their combined scoring average of 50 — in the Razorbacks’ 64-55 loss on Thursday.

The three finished with 27 points combined Sunday. But Arkansas (16-4, 4-3 SEC) adjusted and Daniels and Taylah Thomas took advantage, he said.

“Georgia did a great job with their game plan the other day, and I think it gave them some things they knew they needed to work on that they might see,” Newbauer said. “She [Daniels] did a great job stepping up and making big shots and pushing the tempo. So hat’s off to her.

Daniels, a 5-8 freshman who has started every game this season, credited her teammates for giving her an opportunity to score.

“I just think the big three makes our job a lot easier,” Daniels said. “Because the defense isn’t paying attention to us. As you can see they didn’t pay much attention to me. It opened me up a lot. I just had to focus in and hit shots when we needed them.”

Daniels hit a three-pointer to open the fourth quarter then made a jumper in the middle of the lane to give the Razorbacks a 59-47 advantage. Zada Williams scored to interrupt the Arkansas run, but the Razorbacks followed with a 10-1 spurt. A driving layup by Ramirez put Arkansas in control, leading 69-50 with 6:07 left.

Arkansas Coach Mike Neighbors liked the way his team bounced back from the loss to Georgia on Thursday. He acknowledged player and coaches alike may have gotten too confident after the team’s 100-66 victory over Vanderbilt on Jan. 19.

“We all got past the line of confident and swagger over to a little cocky,” Neighbors said. “And I’m probably just as guilty of it as they were. Whatever we did as coaches and I did, I think it filtered over to them and we crossed that line.”

Besides Daniels, the Razorbacks placed four others in double figures. Thomas added 13 points and a team-high 7 rebounds, while Ramirez and A’Tyanna Gaulden chipped in 12 points each. Tolefree also pitched in 10.

Daniels was especially efficient, hitting 8 of 10 shots from the floor and 3 of 4 from three-point range. She also added 4 steals and 2 assists in a little more than 23 minutes of action. Gaulden, her running mate at the point, chipped in a team-high five assists.

“Nobody in the country plays like them,” Newbauer said. “They are ninth in the country in free throws per possession. Once every five possessions or something they’re getting fouled, so you’ve got to try and pick your poison. It’s hard to prepare for how they play, the tempo they want to play at and the amount of points they want to put up.

“You can’t just play them straight up and let them do what they want to do. So you’ve got to force other people to make plays and I think we did that. They just stepped up and made plays.”

Florida (11-9, 2-5) sliced a 15-point deficit to five late in the third quarter. But Dungee scored right before the buzzer to push the lead to seven and Daniels took over to start the fourth quarter.

Lavender Briggs led the Gators with 17 points and a game-high nine rebounds. Kiara Smith chipped in 10.

Arkansas hits the road this week playing at Alabama on Thursday and traveling to Missouri on Sunday.