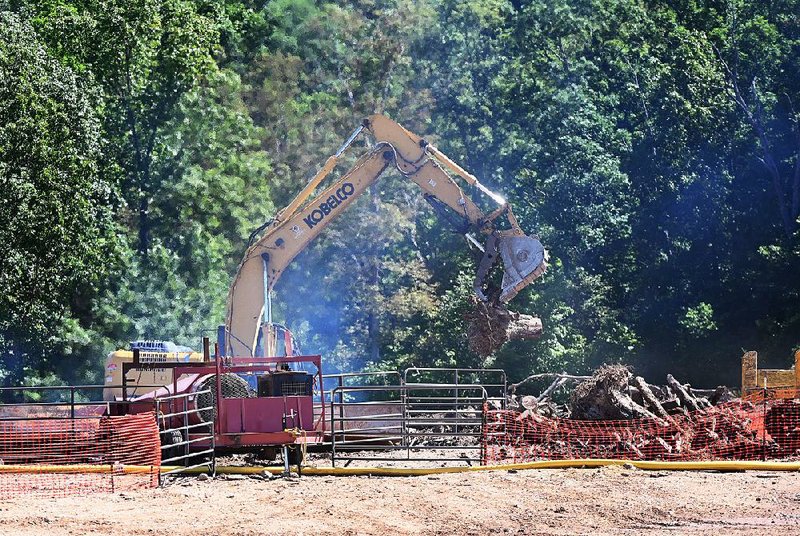 A state environmental review board Friday set aside a consent order between state regulators and a company connected to the Bella Vista stump dump fire that would potentially release the company from having to pay for the fire's extinguishment.

The Bella Vista Property Owners Association, which challenged the agreement, presented new evidence that merits a hearing on the matter, the Arkansas Pollution Control and Ecology Commission determined in a vote with no vocal opposition.

The property owners association contended that the consent order contradicted an order that it had signed with the Arkansas Division of Environmental Quality. The new order, the association argued, meant it would have to swallow the $4 million expense it incurred putting out the fire without the potential to recoup money from others who were responsible, such as the company, Fredericks Construction.

"The POA could not put this money up without hoping or expecting to be able to recover those costs," Jess Askew, an attorney representing the property owners association, told the commission during oral arguments.

The state said the association's challenge did not meet the requirement that "new evidence" must be presented for a hearing to be granted. The company asserted that the plain language of the order the association signed with the state meant it could be be reimbursed only if certain conditions were met, and that they were not.

Commission rules state that challenges to consent orders by third parties, which the property owners association is in this case, may proceed to an adjudicatory hearing only if the challenger submitted a public comment on the order and presents new material evidence not previously considered by the Division of Environmental Quality.

This is the first successful challenge of such a consent order by a third party in decades -- possibly ever. Without a formal hearing, third parties cannot depose anyone or have discovery, which makes the task of proving that officials did not consider certain information challenging. The commission rejected a similar petition in June for a lack of new evidence, despite the challenger asserting that the order that was being contested violated environmental law.

Friday's decision was the latest among legal efforts to officially put someone on the hook for causing the Bella Vista stump dump fire, which occurred underground over multiple acres.

The dump was the result of years of placing trees and other unwanted objects in a hole in the ground, and firefighters discovered it was on fire in July 2018.

The fire burned for the next 11 months, producing air hazardous to respiratory health and posing environment concerns. Eventually, state lawmakers made $20 million available to put it out and clean up the area.

Bella Vista residents have filed multiple lawsuits in Benton County Circuit Court over who is responsible for the fire and who should pay for it.

Another lawsuit accuses 47 former association board members of knowing that dumping was occurring at the site but not stopping it.

The Bella Vista Property Owners Association operated the dump from 2003 until 2016, and the land is owned by Brown's Tree Care. Fredericks previously owned the land, buying it in 2003.

Under the consent order signed by the property owners association and the Division of Environmental Quality, the association is responsible for addressing the fire.

Other groups dumped waste at the site, which legally could only accept trees and other natural materials. Groups put illicit materials in the dump, such as household appliances. The association contends that Fredericks is responsible for some of those materials, including a mattress.

The property owners association has admitted it didn't monitor the dump the last few years it was open.

Its challenge presented to the commission Friday concerns its ability to recover any of the $4 million it's spent so far on the fire.

The association spent the money under the presumption it could attempt to recoup the costs from other "responsible parties." That's the policy under the Arkansas Remedial Action Trust Fund Act. The law does allow that, and the order signed with the Division of Environmental Quality is governed by, among other laws, the Remedial Action Trust Fund Act.

That law requires a site to be considered hazardous for money to be recouped.

That's the same state law under which the state Legislature authorized a $10 million loan to the Division of Environmental Quality and a $20 million contractual services budget increase for the division last March in response to cost estimates for extinguishing the fire.

Before the Bella Vista Property Owners Association hired a contractor to put out the fire, the Division of Environmental Quality had been paying for the work with its own contractor.

At the same time, the division was trying to identify parties that might be responsible, division attorney Michael McAlister told commissioners.

The division left the impression that, "If the state expends this money, we are going to come looking for reimbursement from you guys," McAlister said. "In light of that, the POA stepped up and said, 'You know what? We have a plan. I think we can do it.'"

Fredericks Construction wrote a public comment June 14 opposing the order, contending that extinguishing the fire did not constitute remedial work, as required by the Remedial Action Trust Fund Act.

The company, however, did not appeal the order before it became final.

In September, the company approached the department about signing its own order.

In that order, which is now final, the company and the Division of Environmental Quality agreed that putting out the fire did not constitute remedial work. Additionally, the department stated no evidence existed that the site had any hazardous waste.

Thus, the site -- and the property owners association -- was not eligible for repayment from responsible parties under the Remedial Action Trust Fund Act, and the company wouldn't have to pay anything for the fire's extinguishment.

That the site wasn't eligible was new evidence for Commissioner Joe Fox, who made the motion to set aside the order between Fredericks Construction and the Division of Environmental Quality. Commissioner Delia Haak seconded.

Commissioners did not discuss whether new evidence had been presented but asked a handful of questions of the attorneys at Friday's meeting.

Commissioner Richard Roper said he was concerned that the division had made a "hard statement" that the site was not covered by the Remedial Action Trust Fund Act.

That determination did not come out of a "fact-finding" process, McAlister said.

Fredericks Construction argued strongly for the language used in the order, he said.

"That settlement order with Fredericks really doesn't address those issues with the POA or their ability to seek contribution from other parties in the litigation they're already involved in," McAlister said.

Askew, the attorney for the Bella Vista Property Owners Association, argued that the dump was a hazardous waste site because it contained waste that posed possible threats to public health, such as flammable materials.

Commissioners voted against the Division of Environmental Quality and Fredericks, approving the association's request for a hearing, without any vocal opposition.

The decision means that the order between Fredericks and the division is "set aside" until the matter is adjudicated.