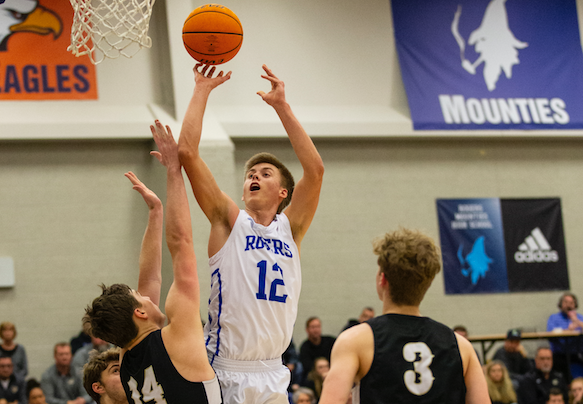 ROGER -- Rogers High struggled throughout the night from the free-throw line, but the Mounties got big defensive stops late to come away with a 49-44 6A-West Conference win over Bentonville on Friday night in King Arena.

Colton Simmons scored to pull the Tigers within 45-44 with more than two minutes left but never scored again.

Rogers' defense ultimately helped them come away with the win.

"That's just our guys," Rogers coach Lamont Frazier said. "We preach the whole game about just staying locked in. That's one of those point we could have looked up at the score and saw it was a one-point game and just caved to the fact that we might or might not win the game.

"Our guys, they fought. They did what they needed to do to win. I'm proud of them for that."

Rogers hit just 12 of 21 free throws in the game, which surprised Frazier.

[Don't see the video above? Click here to watch Coach Frazier's post-game comments as well as highlights from the game.]

"I was a little taken off-guard by our free throw shooting because we missed quite a few in the first half, then missed some big ones down the stretch that could have really extended the game," Frazier said. "I give Bentonville credit. They hung in there, and they fought.

"It was a game tonight of who could survive the adversity."

Paschal led all scorers with 17 points for Rogers, while Derek Hobbs added 13. Brayden Freeman led Bentonville (11-6, 2-3) with 12 points, while Simmons, who struggled with foul trouble all night, added 11.

Bentonville held a brief 41-40 lead on Thane Spencer's driving layup with a little more than three minutes left. But Paschal drained a 3-pointer to give Rogers the lead for good with 2:59 left.

Simmons had a 3-pointer to tie and rebounded his own miss but also missed the putback attempt. Seconds later he picked up his fifth foul with 40.4 seconds left.

The Wolverines held the War Eagles to just five fourth-quarter points to pull away for the win.

West led 31-29 at halftime, but the game was tied at 42 after three quarters.

Dillon Bailey scored a game-high 17 points, including 11 of 14 from the free throw line to help the Wolverines claim the win.

Logan Clines led Heritage (9-8, 2-3) with 13 points, but did not score in the fourth quarter. Micah Hill chipped in nine.

Lawson Jenkins scored a game-high 33 points, including 9 in the fourth quarter as the Wildcats (14-2, 5-0) stay atop the 6A-West standings.

Jenkins scored 19 first-half points as Har-Ber rallied to tie Van Buren at 32-all at halftime.

Going into the fourth quarter, Van Buren trailed 49-41 and got within four points early in the fourth quarter. Jenkins, though, drained a 3-pointer to increase the Wildcat lead to nine and then Charlie Bockelman drained 2 free throws for Har-Ber's first double-digit lead at 57-46 with 4:20 left.

Though the Pointers got to within 61-56 on two free throws by Gary Phillips with 2:20 left, but Van Buren could get no closer. Phillips scored 22 to lead the Pointers.

Tamaury Releford scored a team-high 17 points to help the Purple'Dogs to a win Friday night in the Battle of the Bulldogs.