The Little Rock School District's Community Advisory Board on Thursday directed that three options for establishing school board election zones be made widely available to the public for review and comment before the board selects an option to recommend to the state.

The advisory board further made plans to hold a public forum in February on the election-zone options at a meeting in which it also approved a plan to reserve 300 seats at the new Southwest High School for students who live outside the Southwest High attendance zone and learned that advisory board member Anthony Hampton was resigning, effective immediately, as the result of a new job outside the city, creating the second vacancy on the seven-member board.

Advisory board members asked Superintendent Mike Poore to put the three proposed school board election-zone maps -- marked with schools and significant streets and landmarks -- online and, if possible, presented to parent-teacher association and neighborhood association organizations.

The advisory board will also conduct a public forum on the school board zone proposals in February -- before sending its preferred option to Arkansas Education Secretary Johnny Key for a final decision on the zones from which a nine-member school board will be elected in November. 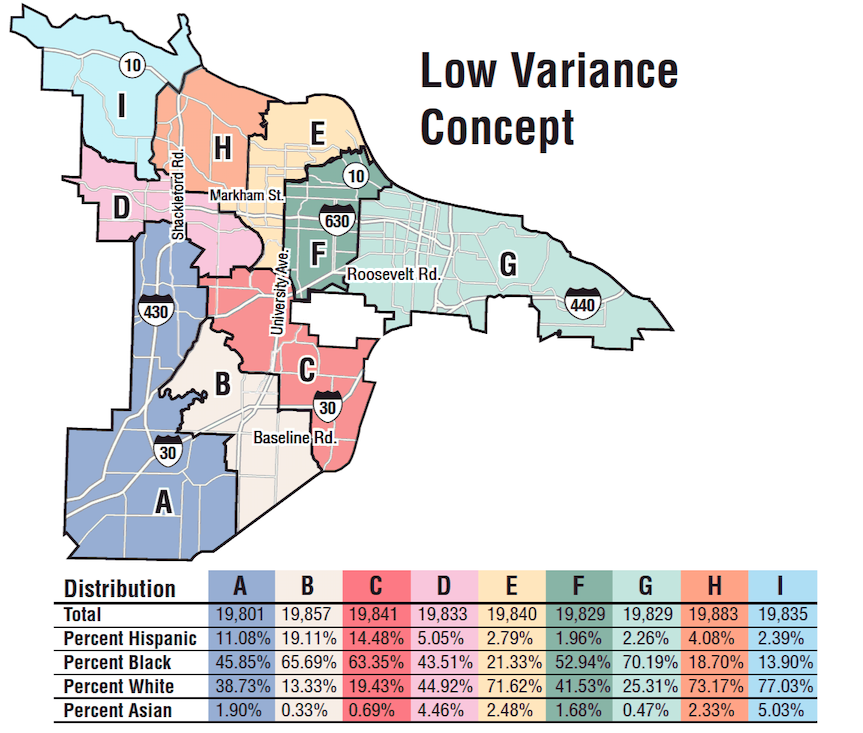 Key acts in place of a school board in the district that has operated for five years under state control and without an elected board. The Arkansas Board of Education voted late last year to return the district -- with some restrictions -- back to local governance after the November election.

Advisory board member LaShannon Spencer questioned the value of any public forum on the issue, saying that it often times appeared that the advisory board did not listen or listened very little to the public's requests at past forums.

Spencer told Poore and her board colleagues that the election-zone proposals need to get as close as possible to grassroots organizations.

Shelby Johnson, the state Geographic Information Services officer, presented to the advisory board the three options that his staff had developed at Key's request.

Each of the options is made up of nine zones, which will result in a nine-member board -- one board member per zone -- in the Little Rock system that before 2015 had a seven member school board.

One proposed option clusters election precincts together to form the nine election zones.

Another option was devised by building zones around groups of elementary schools. 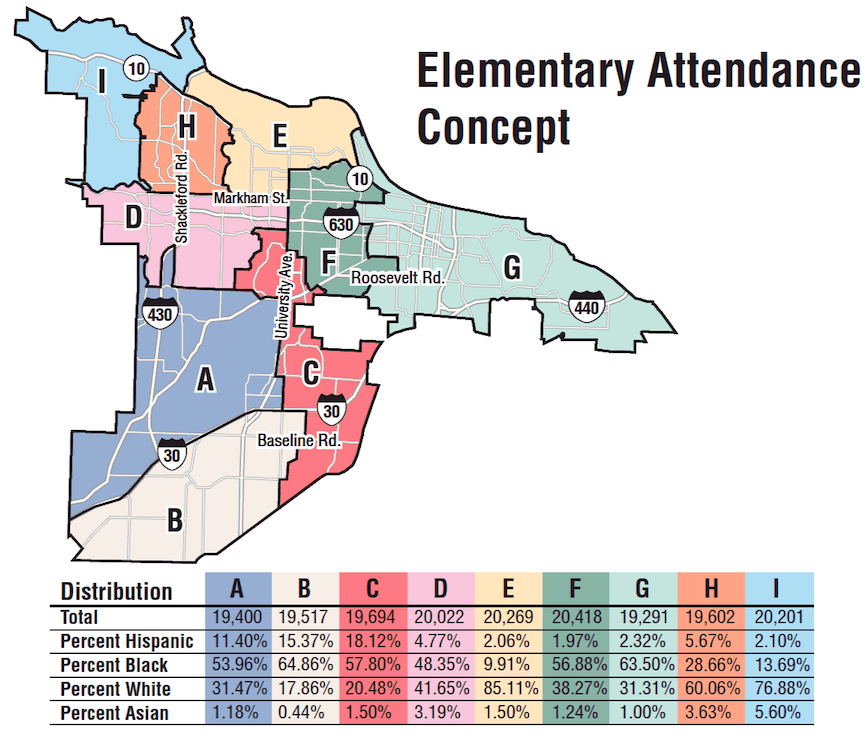 Johnson detailed how election zones must conform to statutes and court decisions that call for elections zones to be substantially equal populations, be compact, and take into account minority populations, communities of interest, and political and geographic boundaries.

He told the advisory board that his staff initially believed that basing the election zones in Little Rock around groups of elementary schools in the district would be the best for the district, but then concluded that a zone plan that incorporates existing election precincts had strengths.

"This is your dad's Ford plan," Johnson said.

"In terms of election administration, in terms of [zone] compactness and contiguousness and substantially equal populations -- this is a plan option that meets all those criteria," he said, emphasizing that the plan would be the easiest for Pulaski County election officials to put into place. 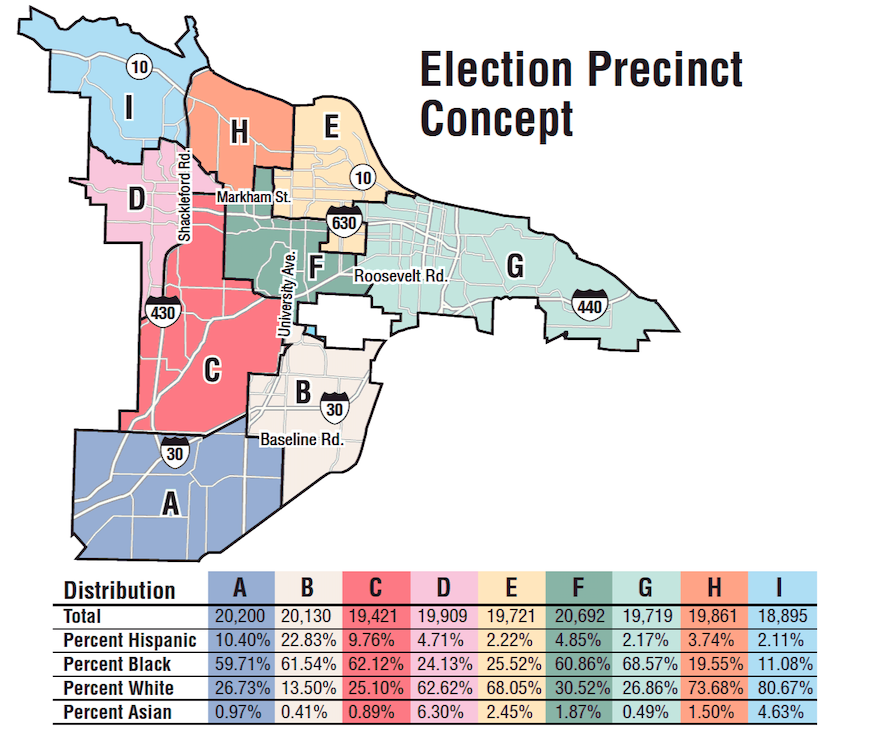 The advisory board members did not express a preference Thursday for any particular plan.

Advisory board member Melanie Fox noted that each proposal included pros and cons and asked whether the plans could be tweaked to reduce their disadvantages.

Jeff Wood, chairman of the advisory board, asked whether the different zone maps could be put online in such a way that viewers could zoom in on particular parts of the zones to see streets and landmarks.

Johnson said he and his staff would make those efforts but face time constraints in doing so.

Pulaski County election officials need a decision on a zone plan in March in order to prepare for a Nov. 3 school board election, Poore said, adding that he hopes the advisory board could vote on a zone plan at its Feb. 20 meeting although he said a special meeting in early March would be a possibility.

Audience members had questions about the election-zone plans.

Helen Davis asked that there be more conversation about how the Little Rock district's Hispanic population was distributed or grouped together in the proposed zones.

Teresa Knapp Gordon, president of the Little Rock Education Association union of teachers and support staff, urged the advisory board to be thoughtful about getting public input on the plans as not everyone will have sufficient access to online information about the plans and that members of the public are tired of showing up at forums and "not being heard."

Ali Noland, a parent and district activist, said she has not decided what plan she prefers but had some concerns about the plan that would be built around elementary schools, saying that it could foster competition for resources among schools rather than build bridges or a sense of unity throughout the city. She also wondered if such a zone plan would cause board members to hesitate to make changes in school attendance zones for the benefit of students if such changes affected their election zones.

The information systems office used the 2010 U.S. census population data, the most recent information available, as the basis for designing the three options. The 2020 census count is now underway, so zones for the Little Rock district and other districts will have to be redrawn in 2021 or 2022 to conform to the updated population information.

The plan drawn around election precincts has the largest variation in population from zone to zone -- a difference of about 1,800 from the smallest to largest of the nine zones -- compared with the elementary school and low-variance options.

The new board will be the only nine-member school board in the state. School boards of either five or seven members are the norm. The Little Rock district had a seven-member board elected from seven election zones before the 2015 state takeover.