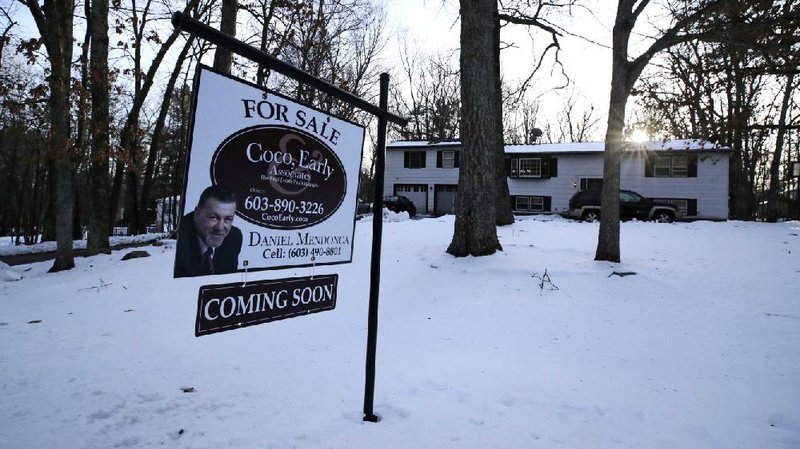 Low mortgage rates lured homebuyers off the sidelines and into the market in December, boosting sales of existing homes 3.6% over those in November.

WASHINGTON -- U.S. long-term mortgage rates fell this week to their lowest level in three months, deepening the incentive for prospective homebuyers although they face eroded affordability as prices continue to climb.

Mortgage buyer Freddie Mac said Thursday that the average rate for a 30-year fixed-rate mortgage declined to 3.60% from 3.65% last week. The benchmark rate stood at 4.45% a year ago. The 30-year fixed rate hasn't been this low since October.

Data released Wednesday showed that U.S. home sales climbed 3.6% in December, but a record-low inventory of houses on the market has caused prices to surge. The National Association of Realtors reported that sales of existing homes rose last month to a seasonally-adjusted annual rate of 5.54 million. For all of 2019, 5.34 million homes were sold, matching the 2018 level.

High mortgage rates hurt sales in the first half of 2019, while lower rates boosted purchases in the second half.

Freddie Mac -- the Federal Home Loan Mortgage Corp. -- surveys lenders nationwide between Monday and Wednesday each week to compile its mortgage rate figures. The average doesn't include extra fees, known as points, which most borrowers must pay to get the lowest rates.

The average rate for a five-year adjustable-rate mortgage dropped to 3.28% from 3.39% last week. The fee was unchanged at 0.3 point.

"Perhaps surprisingly, major geopolitical developments over the past month -- stories that dictated most of mortgage rates' movements through 2019 -- have failed to let rates loose in any meaningful way," said Matthew Speakman, a Zillow economist. "Inflation is running below target and the Federal Reserve appears unlikely to raise the federal funds rate in the near future, so upward pressure on mortgage rates is limited for the time being. With a shortage of market-moving data on tap, and barring a monumental development on the trade front, this minimal upward pressure on rates is unlikely to strengthen in the coming days."

The optimism that has fueled the stock market to record highs lately hasn't dampened investors' enthusiasm for bonds. The yield on the 10-year Treasury dipped to 1.77% on Wednesday. Typically bond prices fall and yields rise when the Dow Jones industrial average soars. The pressures that are keeping bond yields low are also holding down mortgage rates.

"Even though the stock market is at all-time highs, the bond market doesn't believe in the higher rate of the growth story," said Logan Mohtashami, senior loan officer at AMC Lending Group in Irvine, Calif. "We also have cautionary headlines such as Boeing delays and now the coronavirus, to which some people believe this might hinder some growth. ... The market believes the Fed is really out of the picture while growth is stalling. The bond market will get ahead of any Fed action in the future so, for now, Fed meetings don't have the same importance as they did last year."

The Fed meets next week but isn't expected to change its benchmark rate.

At Bankrate.com, which puts out a weekly mortgage rate trend index, more than two-thirds of the experts it surveyed expected rates to remain the same in the coming week.

"Mortgage rates over the last month have been remarkably stable," said Michael Becker, branch manager at Sierra Pacific Mortgage in Lutherville, Md. "Economic reports don't seem to move bond markets lately. For example, [Wednesday's] strong existing-home sales report had no reaction in the bond market, when normally a good report like this would have pushed rates higher. The good news is that rates are holding at three-month lows and very close to last year's best levels. I'm not sure what it will take to break this flat pattern, but someday there will be a breakout to higher or lower levels. For now, I expect more of the same and for rates to hold steady in the coming week."

Meanwhile, mortgage applications retreated after their big jump to start the year. According to the latest data from the Mortgage Bankers Association, the market composite index -- a measure of total loan application volume -- decreased 1.2% last week. Both the refinance index and purchase index fell 2 percent.

The refinance share of mortgage activity accounted for 61.6% of applications.

"Although mortgage applications pulled back slightly last week, the year-over-year comparison points to a solid start for the mortgage market in early 2020," said Bob Broeksmit, association president and chief executive officer. "Refinances were up an impressive 116% from a year ago, while purchase activity increased 8%. With rates predicted to stay below 4% in the near future, applications should remain at this elevated level."

Information for this article was contributed by staff members of The Associated Press and by Kathy Orton of The Washington Post.