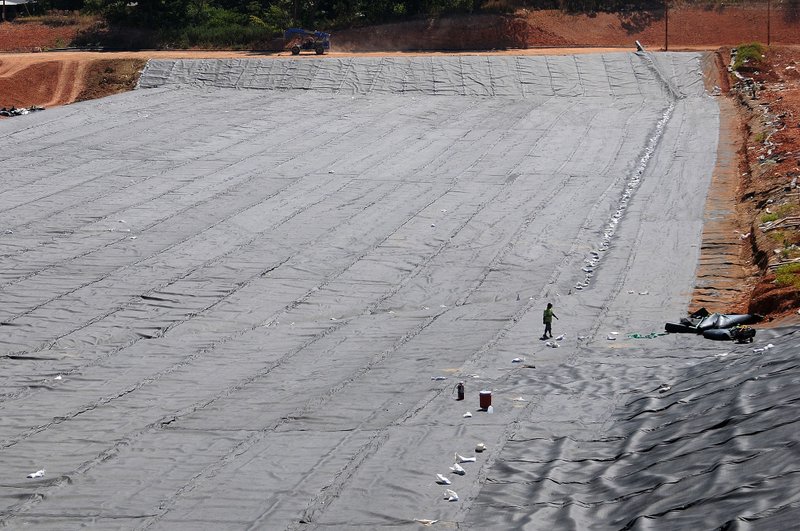 A construction worker walk across a construction site for a seven acre landfill at the Eco-Vista landfill Friday July 20, 2012 in Tontitown. - Photo by Anthony Reyes

Tom Kieklak, attorney for the Boston Mountain district, told the district's board of directors Tuesday that the long-running legal dispute recently became a political issue as well.

Under Act 1376 of 2001, the Arkansas Department of Environmental Quality is responsible for developing a statewide solid waste management plan and setting minimum requirement for the development of plans by the state’s solid waste districts. The plans detail ways to reduce landfill disposal and provide appropriate solid waste disposal services to Arkansas residents.

"I've never seen anything like what has happened to this organization," Kieklak told the district board.

According to Kieklak, representatives of the Benton County Solid Waste District recently obtained approval from the state's Legislative Council for an emergency rule change governing the landfill fees the two districts have been arguing over in a series of lawsuits and appeals. The current case is pending before the state Supreme Court.

"They took away our ability to collect that fee," Kieklak said.

State Rep. Jim Dotson, R-Bentonville, is a member of the Legislative Council's executive committee, which heard and approved the Benton County district's request for an emergency rule change.

Dotson said the state laws and regulations provide that the money from the waste fees be divided evenly between districts in those cases in which one district transports waste to a landfill in another district, if there is no interlocal agreement specifying a different division of the fees.

The Benton County district and Boston Mountain had agreements in place "for years" allowing Benton County to keep the fees generated in its district, Dotson said.

"Traditionally, that's how it had been done," Dotson said. "In 2016, Boston Mountain decided they wanted to change that. State law reads that, in the absence of an agreement, the fee is to be split."

"The customers don't see a change," Dotson said. "But the service charge doesn't have to be split."

Dotson said emergency rule changes are good for 120 days and that the Benton County district has already begun the process of obtaining a permanent rule change.

The two districts have been engaged in a lawsuit since 2016 over fees levied on waste generated in the Benton County district and disposed of at the Eco-Vista Landfill near Tontitown in Washington County.

Under a 2011 agreement between the two districts, each kept the entire amount of the $1.50-per-ton fee for waste generated within its district. In 2013, the Boston Mountain district declared the 2011 agreement void and withdrew. The Benton County district filed a breach-of-contract lawsuit and was successful in having the 2011 agreement enforced until it expired in 2016.

The Benton County district filed a lawsuit asking for the division of fees to be declared unconstitutional and seeking an injunction to have the disputed money held in escrow. The escrow account has grown to between $500,000 and $600,000 since it was created, Kieklak said Tuesday.

Robyn Reed, director of the Boston Mountain district, said the amount collected by the disputed fee is about $186,000 a year.

The state Court of Appeals ruled in favor of Boston Mountain on Oct. 30, and the Benton County district has appealed that ruling to the state Supreme Court, which has not yet ruled on the case.

Kieklak told the Boston Mountain board that the district's options included seeking redress through political or legal means, but he said either would likely take years as the state Legislature won't meet in regular session until 2021 and any lawsuit would take time to move through the courts.

"The first option is political," he said. "Have our elected representatives get down there and stop this thing in its tracks."

Kieklak said he couldn't predict the outcome of a lawsuit challenging the rule change.

"I cannot tell you what the chances are of us overturning an emergency rule such as this," he said.

The board asked Reed to gather information on the cost of overseeing the landfill and the potential costs to the district if the landfill is filled more quickly with the inclusion of waste from the Benton County district, which Reed said accounts for about 48% of the waste taken to the site. The board also asked Reed and Kieklak to examine options for imposing new fees on the Benton County district to make up for the disputed revenue.

Jackie Crabtree, mayor of Pea Ridge and chairman of the Benton County Solid Waste District board, said the Benton County district has been dipping into its reserves since the revenue from the fees has been held in escrow. She said the district needed the money to continue programs and services.

"The emergency was we needed the money to work with," Crabtree said. "Our revenue sources are limited, and we need the money to provide the services."