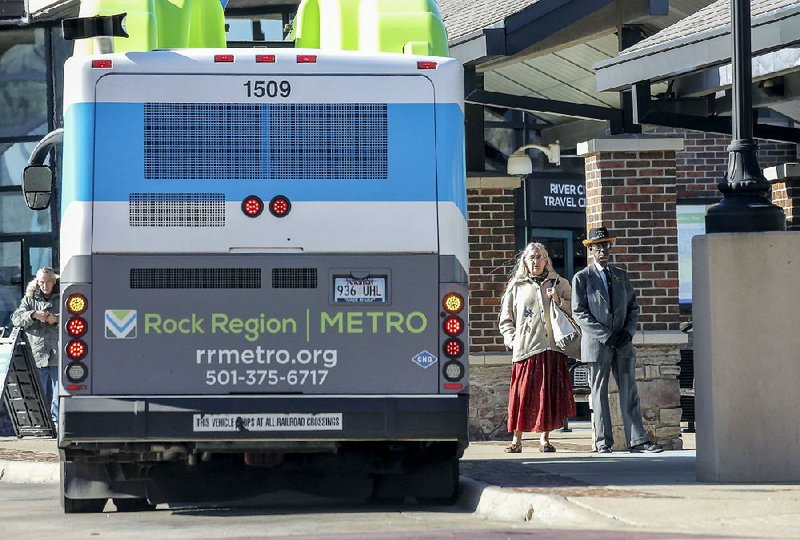 In this file photo passengers wait for their Rock Region Metro bus at the River Cities Travel Center in downtown Little Rock.

Four of Rock Region Metro's 24 regular bus routes carried 40% of the Pulaski County transit agency's 2.2 million passengers in 2018, according to an analysis of its operations.

Those four routes -- Route 10 in North Little Rock and Routes 14, 3 and 5 in Little Rock -- carry more than 20 passengers per hour, which is a "good target" when weighing whether a route is efficient, said Melissa Sather, an executive with the transit planning firm Transportation Management & Design Inc. of San Diego.

By contrast, the transit agency's four express routes carry five passengers an hour. Those same routes also receive a subsidy of $23 per passenger when the agency's average subsidy across its bus network is less than $5, she said. The subsidy is the amount of money it costs to run a bus in excess of the fare revenue a bus generates.

Eleven routes carry between 10 and 20 passengers per hour.

Those were among the findings Sather presented at the monthly meeting of Rock Region's board of directors.

Art Kinnaman, the board chairman, described her presentation as "eye-opening."

The study is expected to lead to recommendations that the board will consider adopting this summer and, according to Rock Region executive director Charles Frazier, lead to potentially painful decisions.

"Change can be uncomfortable," he said.

The most pivotal change may come as soon as March when the board will decide whether to adopt a route model that emphasizes providing routes in the widest area possible or fashioning the routes in way that focuses on increasing ridership, which would devote more resources to increase bus-stop frequency on routes in busier corridors. Without increases in funding, the latter could come at the expense of less efficient routes.

Rock Region now has a blend of coverage and ridership routes.

If the board wants to attract more riders, it needs to make its bus service more attractive, which generally begins with arriving at bus stops more frequently -- 30 minutes or less -- and operating until at least 10 p.m. on week nights, according to Sather.

As it stands now, across the system, it takes an average of four times longer to take a bus to a destination than it does to drive, according to data compiled by Sather's firm.

Seventy percent of the trips involve at least one transfer, which is a factor in the uncompetitive travel times. Another factor, according to Sather, is the street network and routing through suburban neighborhoods.

"You're never going to attract a lot of choice riders if it takes them four times as long to get somewhere," said board member Sara Lenehan, the Little Rock finance director.

The recommendations also will likely include proposed changes to the way the funding from Rock Region's major partners -- the cities of Little Rock, North Little Rock, Maumelle and Sherwood and Pulaski County -- is distributed. For 33 years, the distribution is based on the miles the buses traveled within the respective jurisdictions, which Frazier said limits route adjustments that the staff can make.

"The contribution matrix makes it difficult to be nimble," he told the board. "It's time to look at that."

It also contains some incongruities that are difficult to explain. As an example, Sather pointed to what would happen to Route 26, known as the Maumelle/Oak Grove Express, if it is eliminated.

The route operates in North Little Rock, Pulaski County and Maumelle. Its elimination would save $136,000 annually. However, Little Rock's contributions would increase almost $100,000 because its percentage of miles in the system would increase after subtracting the miles once covered by the express route in the three other jurisdictions.

"It is really important for all the funding partners to understand how a change in ridership that doesn't change the mileage in your respective city at all can increase your costs that much," Lenehan said.

Ridership peaks during the week with 8,600 riders on weekdays, according to the analysis. It falls to 4,700 riders on Saturday and 1,800 riders on Sunday. On both days, fewer buses run. About 35% of all riders are generated by the River Cities Travel Center, the main bus terminal for the system.

The board eventually will be presented with three options, according to Frazier. One option involves essentially no change in funding, another includes a "modest" increase in funding and the third involves a scenario "unconstrained" by resources.

Frazier said the latest initiative is different from one the agency launched several years ago in which it proposed dedicating a 1/4% increase in the county sales tax to transit. Voters rejected the tax increase in the March 2016 primary.

Had the tax passed, the agency would have expanded regular bus service and put in limited bus rapid transit routes on high-traffic corridors in Little Rock. Bus rapid transit features larger buses with platform stops that foster development and has some portion of the roadway dedicated to the buses.

Bus rapid transit is too expensive to be considered, Frazier said.