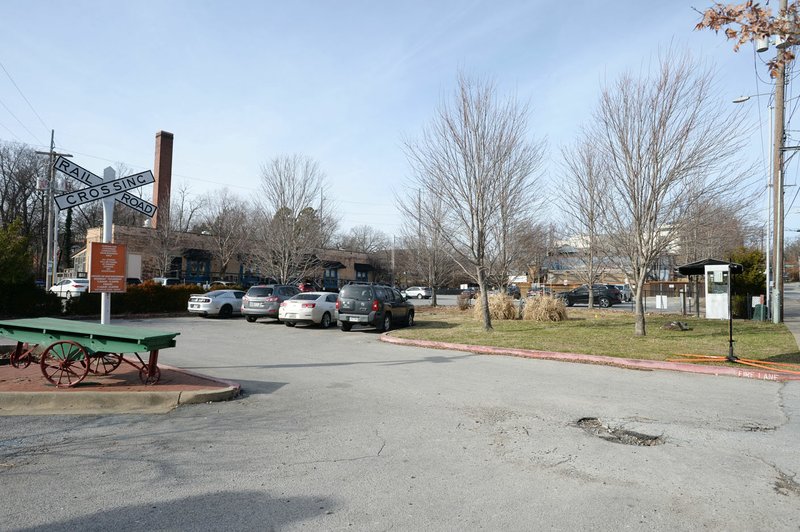 Cars are parked Tuesday in a parking lot on West Avenue in Fayetteville. The City Council -- for the third time -- took up discussion of where to place a parking deck in association with the planned cultural arts corridor downtown. Go to nwaonline.com/200122Daily/ for today's gallery. (NWA Democrat-Gazette/Andy Shupe)

FAYETTEVILLE -- The city will go ahead with negotiation to put a parking deck at the depot lot downtown.

The City Council voted 5-3 for a proposal to put replacement parking for the arts corridor at the northwest corner of Dickson Street and West Avenue. City Attorney Kit Williams said the deal allows him to negotiate a contract with the owners of the lot and bring it back to the council.

• A $634,000 contract with Olsson Inc. for engineering services related to the parking deck downtown.

Do you agree with the proposed placement of the downtown parking deck?

The city negotiated a letter of intent with Greg House and the Bank of Fayetteville, owners of portions of the lot. Under the proposal, the five-level deck would sit east of the freight building, home to Arsaga's, with an alley separating the structures. The depot building would stay, and a multistory hotel with mixed uses would go where the train bank sits now. A police substation also is proposed with construction of the deck.

Williams said he could probably bring a contract back to the council within a month. He said the council could accept, reject or change it. An alternative option would to put the deck on the city-owned lot on North School Avenue, across from the Spring Street deck. He also said the council could put parking at the Walton Arts Center lot, where the green civic space is planned, because the city owns it.

Williams said the letter of intent came from a real estate broker, not the city. The council's decision was whether to entertain it, he said.

"You're going to give me a chance to actually, really negotiate," Williams said. "I don't like their deal. I didn't like it when I first saw it. Let me tell you, it's not the mayor's."

A discussion of where to place the deck briefly recessed Tuesday after demonstrators walked into the council chamber of City Hall and called for an end to local participation in a federal immigration program.

About a handful of people wearing cloths over their faces entered about 7:45 p.m. while the City Council's meeting was going on. The council was discussing the location of a parking deck to go along with development of the cultural arts corridor downtown.

The group held a banner saying, "Fayetteville deports artists of color," and chanted for an end to the federal program that places holds on inmates by U.S. Immigration and Customs Enforcement.

[Click here if you're having trouble viewing the video.]

Under the 287(g) agreement between Washington County Sheriff's Office and immigration officials, undocumented people detained in the facility receive a 48-hour hold by U.S. Immigration and Customs Enforcement. Rodriguez was being held Friday under ICE jurisdiction to be transferred to an immigration detention facility.

The protesters continued to chant outside the council chamber for about 15 minutes. The meeting briefly recessed. Police escorted the protesters outside, and they appeared to walk west down Mountain Street. Police Chief Mike Reynolds said no one was arrested.

The parking deck discussion resumed shortly after 8 p.m. The council had two options to consider. One was to build the deck at the depot lot northwest of Dickson Street and West Avenue. The other option was to put it on the city lot across from the Spring Street deck on North School Avenue.

Discussion went past 9:30 p.m. By then, about 15 residents had spoken to the council. Preferences varied among those who spoke.

Jerry Davis, who said he's worked in the Dickson Street entertainment area for about eight years, said the depot lot was the best option. The move would have a positive impact on the economy and generate tax dollars, he said.

"You guys know the impact a hotel would have, smack dab in the middle of the district, on all the businesses we have now?" he said.

Council member Mark Kinion said he would have liked to see more details about the School Avenue option, which the city calls the East Lot. He described the presentation from staff as one-sided.

"We have not gotten the same information on the East lot," Kinion said. "It has been ignored."

Voters in April approved a more than $31.5 million bond issue to create the arts corridor. It also involves turning the Fay Jones woods west of the Fayetteville Public Library into a nature attraction and street and trail improvement.