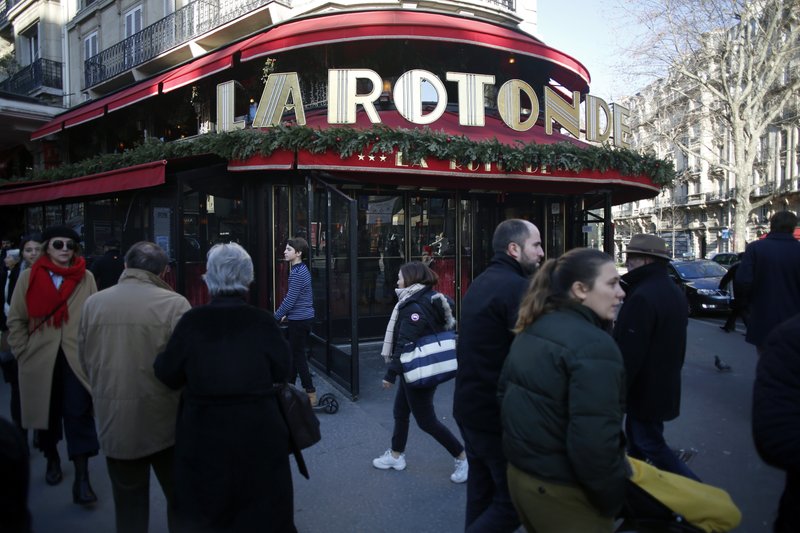 People walk past the restaurant La Rotonde, in Paris, Saturday, jan.18, 2020. The Paris prosecutor's office says it has opened an investigation to determine the causes of the Rotonde fire. (AP Photo/Thibault Camus)

PARIS -- A French government minister warned that seditious groups bent on violence were hijacking the protest movement against a pension overhaul that has gripped the country, after a fire Saturday damaged a renowned Paris restaurant patronized by President Emmanuel Macron.

The Paris fire service said the pre-dawn blaze that singed a corner of the La Rotonde eatery was quickly extinguished. The Paris prosecutor's office launched an investigation to determine the cause of the fire.

Marlene Schiappa, the government's secretary of state for equality, said the blaze "probably" resulted from a criminal act. She described a climate in France "of hate and of violence that is quite incredible," citing the restaurant fire among a list of examples.

"Seditious groups want the law of 'might is right' to reign, to impose violence on all people who think differently from them," Schiappa said on French news channel BFM-TV. "It is very alarming and unworthy of a democracy like France."

After six weeks of labor strikes and nationwide protests against government plans to overhaul France's pension system, there are mounting signs of splits within the movement. As some strikers return to work and train service that has been severely disrupted by walkouts sees notable improvements, more radical protesters are trying to keep the movement going.

[Video not showing up above? Click here to watch » https://www.youtube.com/watch?v=OkKZSL_0zcc]

A protest march through Paris ended after dark Saturday with police firing tear gas and using a water cannon to push back crowds that wouldn't disperse. Some march participants ignited fires outside the Gare de Lyon train station.

He said marchers wore the bright jackets of the 'yellow vest' protest movement that has demonstrated against the policies of Macron's government for more than a year. Tafanel said a yellow vest also was found by police officers investigating Saturday's fire.

Macron's name has been associated with the restaurant since he celebrated there during the 2017 presidential election, after qualifying for the second-round runoff that he later won.

Macron too was a target of protesters Friday night.

Seemingly tipped off to his presence by people inside, several dozen protesters converged on a Paris theater where Macron was watching an evening performance with his wife. Video showed protesters chanting "Macron resign" and some entering a door as surprised police tried to hold them back. A black car reported to be carrying Macron then sped away under a hail of boos.

Earlier Friday, dozens of protesters blocked the entrance to the Louvre museum and forced it to close.

Transportation strikes against the pension overhaul began Dec. 5. Saturday marked their 45th consecutive day, although the job actions are no longer as disruptive as they were.

Workers in other sectors of the economy have held strikes as well, including at ports and oil refineries.

On Saturday, musicians, singers and other members of the striking Paris Opera drew a crowd with a free concert in front of the Palais Garnier opera house. Protesting violinist Emilie Belaud said she doesn't condone violence but understands it.

"It's actually the price to pay for the government that doesn't listen to its citizens," she said.

Information for this article was contributed by Chris den Hond of The Associated Press.