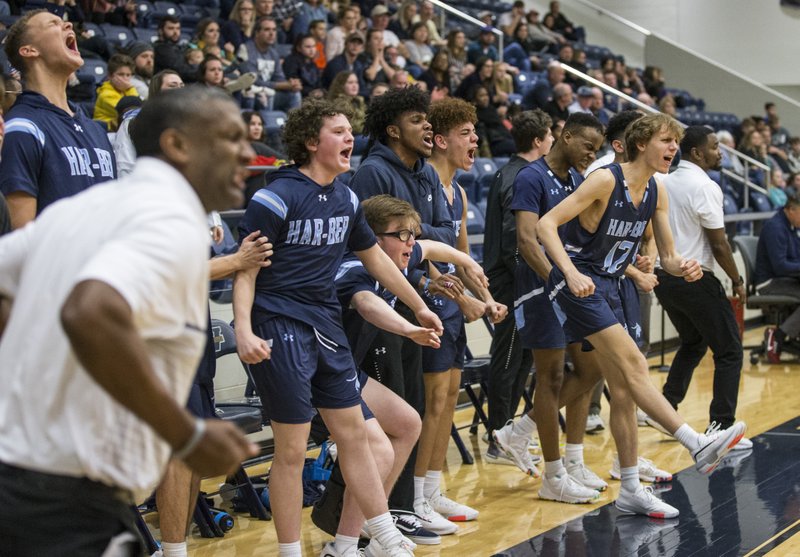 The Springdale Har-Ber bench erupts in cheers after a basket to tie the score 55-55 with just over a minute remaining vs Bentonville West Friday, Jan. 17, 2020, at Wolverine Arena in Centerton. - Photo by Ben Goff

CENTERTON -- It was hard to tell after Friday's game who left more sweat on the Wolverine Arena floor, Springdale Har-Ber coach Tommy Deffebaugh or his players.

The Wildcats rallied from an 18-point deficit in the second half to stay atop the 6A-West Conference standings with a 61-58 win against Bentonville West.

Har-Ber trailed 50-32 with 7 minutes, 9 seconds left in the game when West's Riley Buccino hit one of two free throws after an intentional foul. But Har-Ber (13-2, 4-0 6A-West) overcame poor shooting and foul trouble to pull off a stunner.

"We couldn't make any shots," Deffebaugh said of his team's early struggles. "I don't know what our percentages were, but I know good and well we were in the 25- to 30-percent range. We didn't get to the free-throw line very much in the first half, but then we finally got a little rhythm defensively, got some turnovers, got some baskets, got to the free-throw line. And once we got it within single-digits, our guys got a little confidence."

Har-Ber lost two starters to fouls and both JuJuan Boyd and Lawson Jenkins played most of the fourth quarter with four fouls, but the Wildcats were able to flip the game on the defensive end late.

Jenkins gave the Wildcats a jolt of momentum with a dunk with 5:01 left that pulled Har-Ber within 51-41. Then Boyd, who scored 11 of his game-high 20 points in the fourth quarter, hit a 3-pointer that pulled the Wildcats within 53-46. Jenkins then hit his only 3-pointer of the night from deep that made it 55-49.

After Boyd hit a pull-up to pull Har-Ber within 55-53, the Wildcats forced a tie ball under their own goal and got possession. Boyd hit again from inside the lane to tie the game at 55-55, then the Wildcats forced a West (7-7, 2-2) turnover and converted on a Charlie Bockelman layup and a 57-55 lead with just under a minute left.

Har-Ber was able to nail down the game at the end as Boyd was 4-of-4 from the free-throw line.

"I'm a senior, so I just had to stay calm," said Boyd. "When we got down, man it's not easy to come back on a team like (West). I give props to them and I give props to us to keep working. We just believed in each other. I mean, it was a tough task, but we did it."

West was in control for three quarters, using a swarming defense to deny Har-Ber any easy looks. Jenkins, Har-Ber's leading scorer on the season, did not score in the first half and senior guard Nick Buchanan, another top scorer, managed just five points before fouling out.

"We talked about having Martin Luther King Day coming up, we don't play next Tuesday and we always talk about what the weekend feels like when you win on Friday," Deffebaugh said. "This just makes everybody's weekend really good.

The Purple Bulldogs used a big fourth quarter to pull away and coasted to the 6A-West victory.

Tamaury Releford scored all 24 points in the second half to key the Fayetteville win.

Releford, a 6-6 junior, keyed the surge with 14 fourth-quarter points. No other Fayetteville player scored in double figures.

The Mounties trailed by a one point after a quarter, but held Springdale to just eight points in the next two quarters combined to grind out a 6A-West conference win.

Derek Hobbs was the Mounties' lone player in double figures with 14. Brandon Henry led Springdale (7-9, 0-4) with 12 point, but nine of those came in the first quarter.

Logan Glenn poured in a game-high 32 points to lead the War Eagles to a key 6A-West conference win.