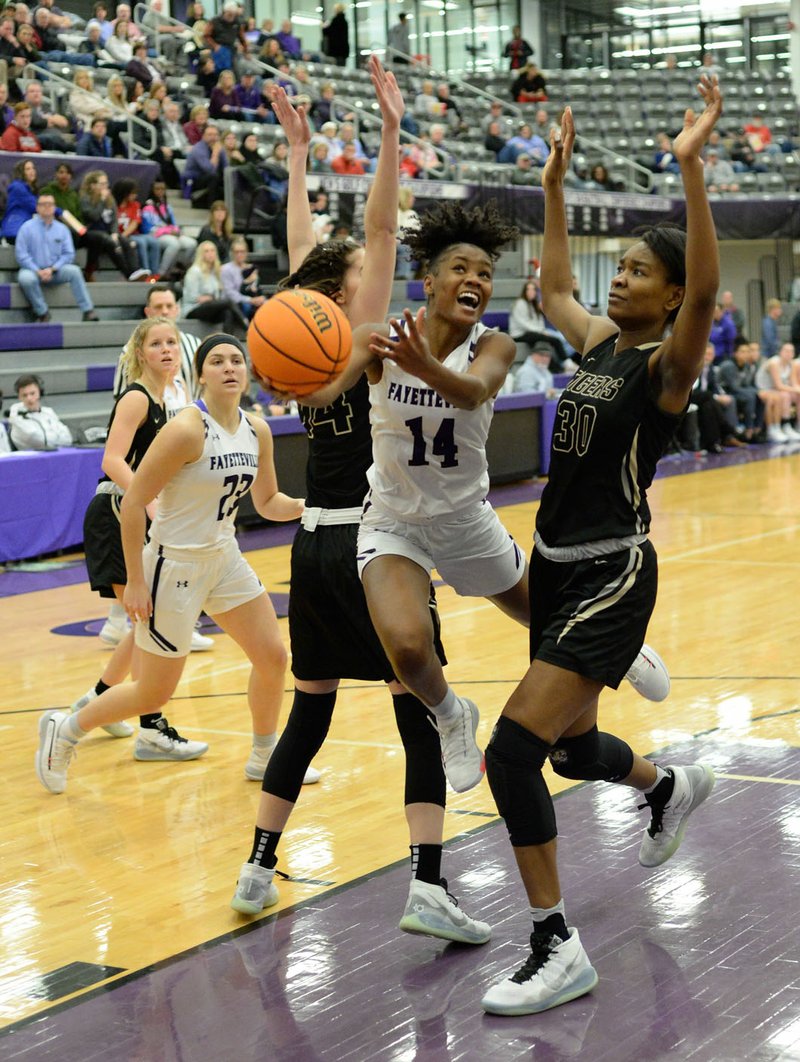 Fayetteville's Coriah Beck (14) reaches to score Friday, Jan. 17, 2020, over Bentonville's Maryam Dauda (right) and Bella Irlenborn during the first half of play in Bulldog Arena in Fayetteville. Visit nwaonline.com/prepbball/ for a gallery from the games. (NWA Democrat-Gazette/Andy Shupe)

FAYETTEVILLE -- Bentonville High limited Fayetteville to just one field goal in the third quarter to turn an eight-point deficit into a seven-point lead but still needed free throws from Jada Brown in the final 30 seconds to claim a key 55-53 6A-West Conference road win Friday in Bulldog Arena.

Lady Tigers coach Tom Halbamaier said his team played better in the final two quarters after a slow start. Maryam Dauda poured in a game-high 28 points, while Brown was also in double figures with 13 for the Lady Tigers.

"Maryam played really well in the first half, kept us close. We just hit shots in the second half and made plays. We were very fortunate Fayetteville missed some shots and we got some stops."

Dauda, a 6-foot-4 junior rated as the No. 1 post player in the country by ESPNW in her class, gave Bentonville a 46-37 advantage in the first minute of the fourth quarter. But Fayetteville (12-4, 3-1) pulled within 50-47 with 1 minute, 48 seconds left on Coriah Beck's fast-break layup after a Lady Tiger turnover.

But Brown hit one of two free throws with 5.7 seconds left for a 55-51 lead, making Sasha Goforth's runner at the buzzer of little consequence.

"They are a very experienced team and when you have a team like that they find ways to keep it close and give them a chance at the end," Halbmaier said. "Jada hitting that one free throw with five seconds left was huge."

Goforth, an Oregon State signee, led Fayetteville with 17 points, while Beck and Caroline Lyles added 12 each.

Fayetteville coach Vic Rimmer said the third quarter in which Bentonville outscored the Lady Purple Bulldogs 17-2 was the difference.

"The third quarter was horrendous for us on both ends," Rimmer said. "We did not execute on the offensive end. We took very poor shots. We turned the basketball over. The first half, I thought we had a little more energy, and then at the end of the fourth quarter, we kinda picked things back up.

"A desperate team plays hard, and that's kinda what we did, I thought."

Fayetteville scored eight of the last 10 points of the first half to lead 35-27. The Lady Purple'Dogs got balanced scoring with Lyles leading the way with 10. But Goforth added nine and Beck eight. Dauda was Bentonville's only player in double figures in the first half with 17.

West (5-13, 1-3) pulled within 34-24 midway through the third quarter, but Har-Ber's Caylan Koons, who added 14 points, knocked down back-to-back 3-pointers and the Lady Wildcats were never threatened the rest of the way.

The Lady Mounties jumped to a 26-16 halftime lead and went on to claim the win.

Lanee Knight poured in 20 points to lead the Lady War Eagles to the 6A-West conference win.