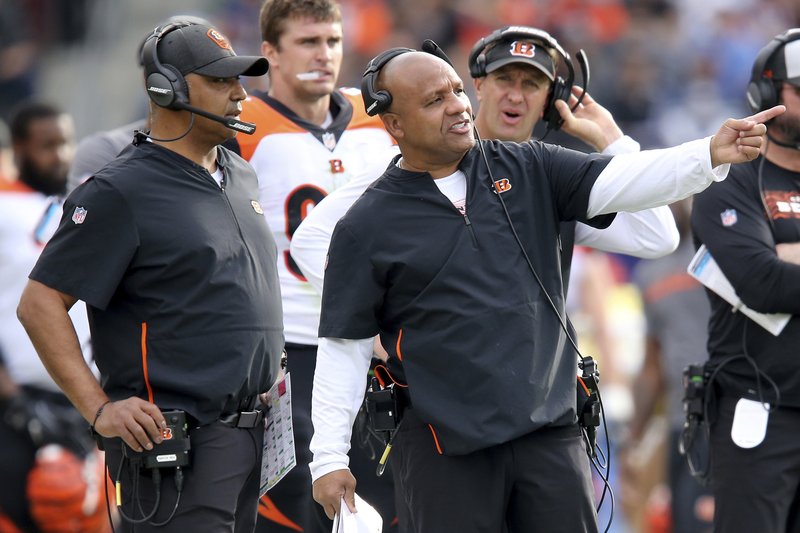 FILE - In this Dec. 9, 2018, file photo, Cincinnati Bengals special assistant to the head coach Hue Jackson, right, points something out to head coach Marvin Lewis during the second quarter of an NFL football game against the Los Angeles Chargers in Carson, Calif. Marvin Lewis and Hue Jackson are back on the sideline as head coaches this week for the NFLPA Collegiate Bowl. (Kareem Elgazzar/The Cincinnati Enquirer via AP, File)

PASADENA, Calif. -- Hue Jackson and Marvin Lewis don't know if they will appear again on an NFL sideline but today they will be coaching players who hope to get to the next level.

The close friends are the head coaches for the NFLPA Collegiate Bowl. Lewis led the Cincinnati Bengals for 16 years but was fired in 2018 after the franchise's third consecutive losing season. Jackson had three stints as an assistant on Lewis' staff, including last season when he was hired shortly after being fired by the Cleveland Browns.

Both are glad to be back directing their staffs on a sideline, even if only for a week.

"He's one of my best friends in the business. It is always good to compete against him," Jackson said.

Lewis has spent most of the past year as a special adviser at Arizona State. Herm Edwards said the main reason for bringing Lewis aboard was to help him coach the coaches, but it also includes advance work on opponents as well as going through practice plans.

The role allowed Lewis to be closer to family. His daughter is an Arizona State graduate and still lives in the area. Since Lewis was not one of the 10 assistants, his position didn't include any on-field work until the Sun Devils' appearance in the Sun Bowl, when he was an interim assistant because of changes to the staff.

"It has been great and fulfilling to assist the players and coaches. It also gave me a chance to recharge and go back to the lab and study football," Lewis said. "It has allowed me a chance to understand more of the college game and help them with trends in the NFL. I can look at different things and see if we might be able to implement them."

Lewis was 131-129-3, including playoffs, with the Bengals and led them to four division titles. The only thing he wasn't able to do was get a playoff win in seven attempts. After five consecutive postseason trips from 2011 to 2015, the Bengals had losing records in Lewis' final three seasons.

He did receive some interest from teams the past couple weeks, including an interview with the Dallas Cowboys. Whether it leads to more opportunities down the line is something that Lewis isn't concerned with at the moment, noting that it has to be a good fit for everyone.

"At this point in my life things need to go both ways. I don't know if it will happen in the future. I am blessed to be doing what I am now," Lewis said.

While Lewis has had some calls, Jackson is still waiting, which he admits is a different situation for him. He has spent most of the past year doing work for his foundation -- which works to prevent human trafficking -- as well as partnering in a tequila business.

"My coaching record over 32 years speaks for itself," Jackson said. "I don't think 2½ years at Cleveland should tarnish my whole career but at the same time people have to know that you are out there and are willing and able to work."

He watched games during the season, but only focused on former players or coaches. Jackson said he stayed away from watching Cleveland's games.

"That's where the itch comes from. You miss the smell of the grass, the players, the camaraderie and all the process you went through," he said. "When you look back there are a ton of things I would do different. For one I would have never gave up play-calling."

Lewis -- who coached in the Senior Bowl three times -- said he has been impressed with the way the NFL Players Association is conducting the game and practices. Jackson agreed and said the most important part comes today when the players get their chance to showcase their skills for scouts.

"It's about the experience and the process. The guys who play well are the ones who understand that," Jackson said. "We'll find out who did extra work when they were away from the coaches because this is their chance to showcase their ability."