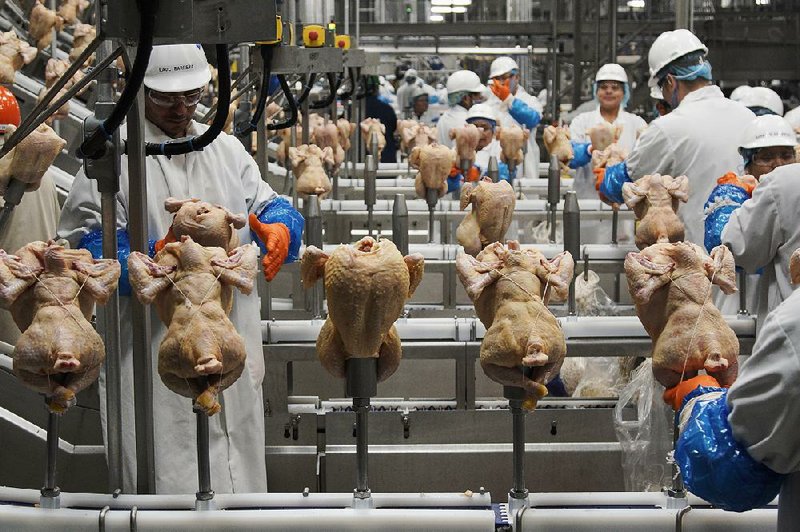 WASHINGTON -- U.S. wholesale prices rose a slight 0.1% in December as a jump in the cost of energy was offset by falling food prices.

The Labor Department said Wednesday that the December increase in its producer price index, which measures inflation pressures before they reach the consumer, followed no change in November.

Energy prices were up 1.5%, more than double the 0.6% November gain, with gasoline costs up 3.7% and heating oil up 7.7%, the biggest monthly gain in two years.

Food costs were down 0.2%, the first drop since August, with the biggest drop in beef prices in more than two years offsetting a jump in the price of chicken.

Core prices, which exclude food and energy were up 0.1% in December and a modest 1.1% for the year. The median estimate in a Bloomberg survey of economists projected a 1.3% yearly advance. The Bloomberg forecast called for a 0.2% gain in both the overall and core producer price index from a month earlier.

The report on wholesale prices followed a report Tuesday showing that prices for consumers at the retail level were up a small 0.2% in December with consumer inflation rising 2.3% for the full year.

It showed that final demand services prices were unchanged in December after a 0.3% decline a month earlier. Transportation and warehousing services costs jumped 2.7% from a month earlier, the largest advance in records to December 2009.

The cost of goods rose 0.3% from November, matching the previous month's gain.

Separately, the U.S. economy kept growing at a modest clip as 2019 drew to a close, while a deterioration in manufacturing employment belied overall tight job market conditions across the country, a Federal Reserve survey showed.

"A number of Districts reported job cuts or reduced hiring among manufacturers, and there were scattered reports of job cuts in the transportation and energy sectors," according to the report released Wednesday.

The Fed cut interest rates three times in 2019 in an effort to keep a slowing global economy and uncertainties generated by President Donald Trump's trade war with China from pushing the U.S. economy into a recession.

It had the leeway to make the rate cuts even though unemployment was at a half-century low because inflation pressures have remained modest.

The central bank's Beige Book economic report, based on anecdotal information collected by the 12 regional Fed banks through Jan. 6, also showed that inflation at the consumer and producer levels "continued to rise at a modest pace."

The Beige Book, prepared by the New York Fed, supports central bankers' December decision to leave interest rates unchanged after the cuts in 2019. Most officials favored keeping rates on hold for all this year, their projections showed, unless there was a material change in the economic outlook.

Despite weaker activity and employment at the nation's factories, the labor market overall "remained tight," with most districts citing "widespread labor shortages as a factor constraining job growth."

Information for this article was contributed by Martin Crutsinger of The Associated Press; and by Vince Golle, Kristy Scheuble and Craig Torres of Bloomberg News.