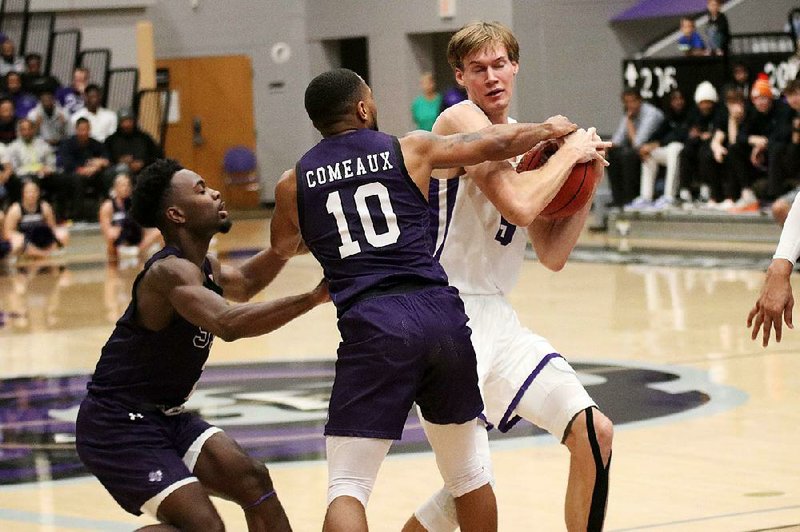 Central Arkansas junior center Hayden Koval (right) battles for possession of the ball with Stephen F. Austin’s John Comeaux (center) and Roti Ware during the Bears’ loss to the Lumberjacks on Wednesday night at the Farris Center in Conway. (Photo courtesy of the University of Central Arkansas)

CONWAY -- The University of Central Arkansas men's basketball team was missing its point guard Wednesday night, but the Bears still took one of the Southland Conference's top teams to the limit.

Without junior DeAndre Jones, who didn't play because of an ankle injury, the Bears lost a heartbreaker, 77-76, to Stephen F. Austin in front of an announced crowd of 1,455 at the Farris Center.

Jones is averaging 13.8 points in nine games this season and had returned to the Bears' lineup Jan. 2 after missing a month with a high ankle sprain. But Jones injured his ankle in UCA's 89-82 victory Saturday against Sam Houston State.

The Bears battled without their second-leading scorer, though.

But Stephen F. Austin (14-3, 5-1), which upset then-No. 1 Duke on Nov. 26, 85-83 in overtime, went to senior guard Kevon Harris, who was fouled by UCA junior guard Rylan Bergersen with two seconds remaining. Bergersen, who led UCA with 19 points, fouled out on the play.

Harris made the first three throw, then missed the second. Kensmil grabbed the rebound for the Lumberjacks, who ran out the clock.

"We wanted to put it in our best player's hands," Stephen F. Austin Coach Kyle Keller said. "Just get [the ball] to him and let him make a play. Kevon put pressure on them. He got contact and made a big free throw."

Sophomore forward Eddy Kayouloud finished with 17 points and 10 rebounds for the Bears but fouled out with 27 seconds left. Senior forward Aaron Weidenaar scored 16 points on the strength of five three-pointers.

UCA interim coach Anthony Boone was proud of how his team played without Jones, but losing Wednesday was tough to handle.

"The effort was great," Boone said. "Not having DJ [Jones] definitely hurt. But other guys stepped up. We played pretty good for most of the game. We still had a chance to win. It was a fun game to be in but not so fun to be on the losing side of it."

Boone said Jones is day-to-day, and his status is not certain for Saturday's game at Nicholls State.

The Lumberjacks had three other players with at least 10 points. Junior guards Cameron Johnson (Little Rock Central) and David Kachelries each had 13 points, while Roti Ware, also a junior guard, added 12. Stephen F. Austin shot 53.7% (29 of 54) from the floor and hit 12 of 27 (44.4%) from three-point range.

UCA was down, but not out, as it finished the half on a 20-4 run to go into halftime tied at 37-37. The Bears held the Lumberjacks to one field goal in the final 5:36, and freshman guard Lewis McDaniel's layup before the buzzer tied the game at 36-36.

But the Lumberjacks went on an 8-0 run, capped by Johnson's three-point play that gave them a 74-66 advantage with 4:25 left.

Boone was positive about his team going forward in league play after their performance against the Lumberjacks, who have won four of the past six Southland Conference Tournament championships.

"This team earlier in the season, in games like that, we would have folded. Sixteen would turned to 20 and 25 would have turned to 30," Boone said. "We challenged them and they responded very well."

The University of Central Arkansas was outscored 28-6 in the first quarter and never recovered Wednesday in a loss to Stephen F. Austin at William R. Johnson Coliseum in Nacogdoches, Texas.

Stephen F. Austin built a 17-0 lead over the first six minutes of the first quarter before Alana Canady's jumper with 3:53 left in the quarter broke the scoring run. The lead grew to 22 points at the end of the quarter after Zya Nugent hit two free throws for a 28-6 lead.