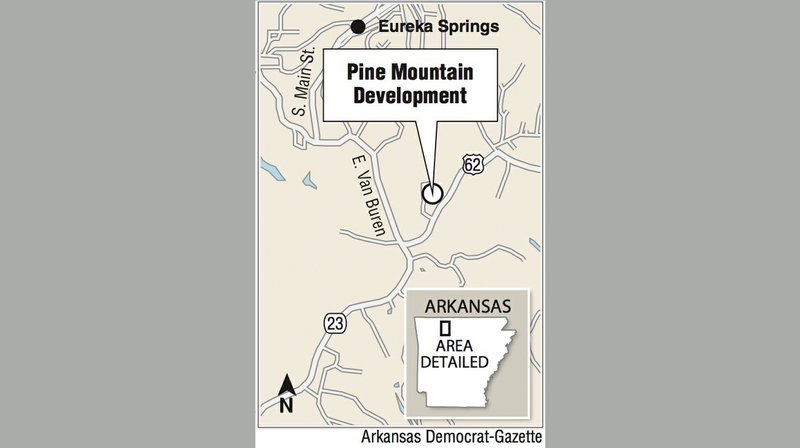 A map showing the location of the Pine Mountain Development.

A developer who wants to turn a sleepy Eureka Springs shopping center and vacant theater into a tourism hot spot announced plans Wednesday to spend $10 million on new cabins, restaurants and bike trails.

Marshall Johnson, chef and owner of the Rockin' Pig Saloon, a wood-fired pizza, burgers and barbecue restaurant in Eureka Springs, said he wants the Pine Mountain development to mirror efforts in other cities where entertainment districts are being created.

At 2075 E. Van Buren Ave., also known as U.S. 62, home of the long-standing Pine Mountain Village and Pine Mountain Jamboree, Johnson and his father, Paul, have plans to develop 40 acres into a mixed-use "hospitality adventure destination" by autumn.

The plans include a 200-person event center, a farm-to-table restaurant, a Wagyu beef steakhouse, a cafe, a visitor center, shops, bike trails and cabins in the woods.

Once it's finished, Marshall Johnson said, he hopes it becomes the "backyard playground for the booming Northwest Arkansas population."

Eureka Springs, nestled in the heart of the Ozark Mountains, has been marketed as a tourist destination for years, drawing newlyweds, retirees and bikers on a regular basis. Johnson said he wants Pine Mountain to be for everyone, foodies in particular.

A chef by trade, Johnson is developing Lyman's Prime Steakhouse, named after his grandfather, a former Walmart executive in the '70s; Rockin' Pig Woodfire Kitchen, a farm-to-table restaurant; and Lil' Pig Cafe, which will serve coffee and pastries. He said the restaurants will serve Wagyu beef, a Japanese cattle breed raised on his family farm.

Also in the works is an event center called the Social House -- intended for mixers, weddings and corporate events -- and 15 cabins on the wooded hillside with access to 3 miles of hiking and biking trails.

"What they want to create is this awesome mixed-use, lodging, recreation, outdoor, entertainment venue, right here on U.S. Highway 62," said Martin Thoma, principal of Thoma Thoma marketing agency in Little Rock, whose clients include the Johnsons.

"Hopefully this is the next big wave of hospitality and tourism," he said. "It's not just little Victorian cottages and kitschy knickknack stores."

The development will take space that once housed the Pine Mountain Jamboree, a live country music and comedy stage show that opened in 1975 under the ownership of Dave and Dee Drennon. The Drennons built Pine Mountain Village in sections throughout the '80s. Time passed, and when they wanted to retire, the Drennons sold the property to the Johnson family in 2015. The theater has been empty for years.

"I think the Johnsons had some big plans all along ... and it's just taken this long to come to fruition," said Gina Rambo, a publicist for the Eureka Springs Advertising and Promotion Commission.

"Eureka Springs has so many different markets, and this facility will cater to all of them -- not just the mountain-biking crowd," she said.

Progressive Trail Design, responsible for the Slaughter Pen mountain-biking trail in Bentonville and Lake Leatherwood Gravity Trails in Eureka Springs, is designing the trails. Architecture firm Shea Design of Minneapolis is behind the construction and brand development for the restaurants, event centers and more.