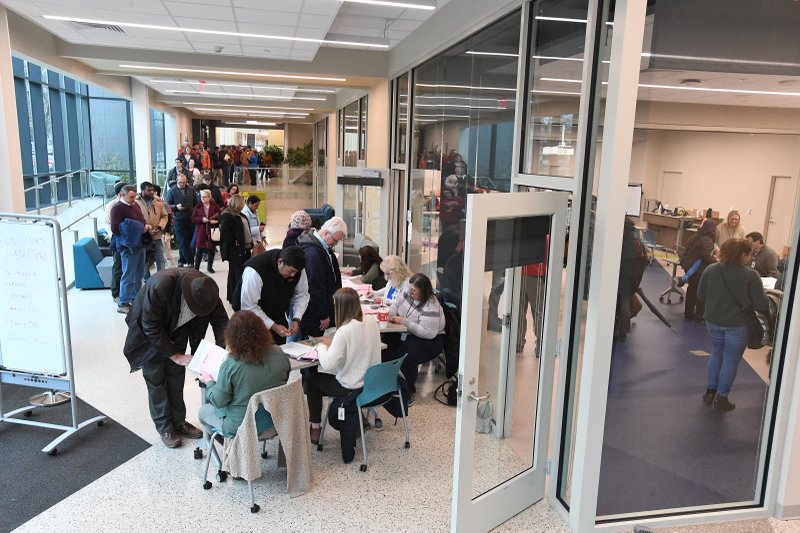 Faculty and staff members line up Monday Dec. 16, 2019 Arkansas Department of Health to get vaccinations at the Pat Walker Health Center at the University of Arkansas. Faculty and staff at the university will be required to have two measles, mumps and rubella vaccinations or otherwise show proof of immunity by Jan. 10 as the number of confirmed mumps cases tied to campus has risen to 32. (NWA Democrat-Gazette/J.T.WAMPLER )

FAYETTEVILLE -- A total of 194 University of Arkansas, Fayetteville faculty and staff members as of Tuesday were considered not "compliant" with a state vaccination directive issued in response to a campus mumps outbreak, a UA official said Wednesday.

"We're expecting people to be in compliance," Terry Martin, the university's senior vice provost for academic affairs, told faculty members at a meeting of the UA faculty senate.

Jim Coleman, UA's provost, said supervisors "are supposed to tell people to go home" if the workers they oversee are not in compliance with the directive.

There had been 37 mumps cases identified at UA as of Friday, according to the state Health Department, with the total dating back to September. Mumps is a viral illness that can result in serious complications, although most people recover completely.

In mid-December, the state Health Department issued a directive giving UA workers a Jan. 10 deadline to show proof of immunity or documentation that they have had two doses of measles, mumps and rubella vaccine. Having two doses of the vaccine reduces the risk of mumps by about 88%, according to the Centers for Disease Control and Prevention.

The directive for UA workers followed a November directive requiring students to have two MMR vaccinations or be excluded from campus class activities.

Martin told UA's faculty senate that "at this point" there are 59 students who cannot attend class, including 16 with state-granted exemptions from vaccine requirements.

UA enrolled a total of about 27,500 students in the fall.

State law allows for exemptions from vaccine requirements for religious, philosophical or medical reasons. But the exemptions do not allow those affected by the directives to go to campus to attend class or work.

Martin told the faculty senate on Wednesday that about 4,800 workers have had to show compliance with the directive.

"That means we got a little over 4,600 people in compliance out of the 4,800 that we started [with]. So that's a real response, a great response," Martin said.

Martin said the total number of workers not in compliance continues to change "by the hour, almost" as some still are turning in documentation or getting a dose of the vaccine.

The campus began its spring semester on Monday. Among the 194 people considered not to be in compliance as of Tuesday were 21 instructors, Martin said.

The directive states that those not in compliance are to be excluded from working on the UA campus until the mumps outbreak ends. Two doses of the MMR vaccine cannot be administered at once, so workers who have received one dose of the vaccine since December -- the state Health Department has administered several campus vaccination clinics -- are allowed to continue working on campus.

Martin also said "several" students have had only one MMR vaccine dose and can attend class but will need to get a second shot.

The state Health Department has said that what's known as the incubation period for mumps is 26 days. An incubation period generally refers to the amount of time it takes for symptoms to appear after exposure.

An outbreak will only be declared over when two incubation periods have passed with no new cases, according to the Health Department.

Martin said the earliest that the outbreak could be declared over is Feb. 10.

"If we have another case, then we'll restart the clock and it'll be 52 days after that then. Hopefully we will not have any new cases," Martin said.

Coleman said workers without medical exemptions will not be paid if they're not working. He told faculty members that the directives come from the state, not UA.

"Our desire to have everybody be immunized or not be on campus is not a university decision. It's our way of implementing what we have been told to do," Coleman said.