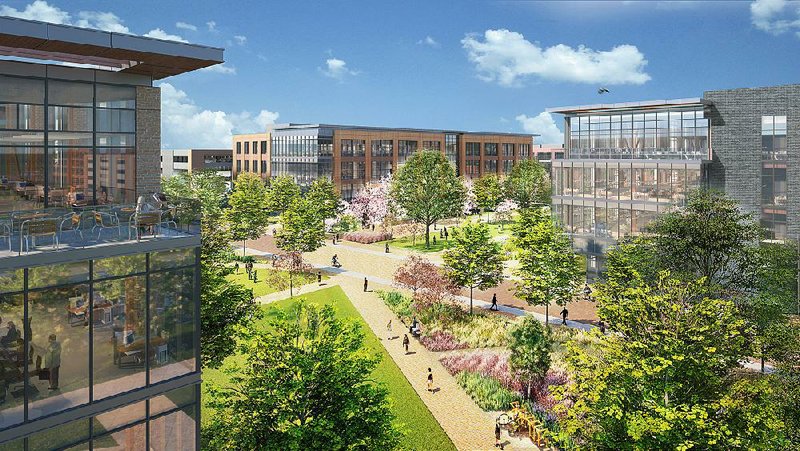 An artist rendering shows the redesign of the Walmart corporate campus in Bentonville, with design and construction to begin in 18 to 24 months. More renderings of the plans are available at arkansasonline.com/518walmarthq/.

The council approved a $426,352 contract with Ampirical of Mandeville, La., to do preliminary engineering plans and cost estimates for moving substation B, expanding substation E and moving electric lines.

The new campus will be roughly 350 acres on the east side of J Street, between Central Avenue and 14th Street, according to the company website.

A letter from Travis Matlock, city electric utility director, to Mayor Stephanie Orman and the council detailed the scope of the project.

Substation B will be moved west of the Neighborhood Market on East Central Avenue. The substation at 1991 S.E. Fifth St. Substation E will get a second transformer and breakers added to its site at 910 S.E. J St.. The electrical line down Eighth Street will be moved as part of the substation B project, according to the letter.

The Walton Family Foundation also asked plans be prepared to place the lines along Eighth Street from J Street to Main Street underground. The work would be separate from the Walmart campus work, but all the work would be done at the same time, the letter stated.

The project scope development (at 30% set) will produce documents with drawings, a bill of material, cost estimates and the direction of the project that can be agreed upon by the city, Walmart and Ampirical, the letter stated. The cost for engineering/moving will be paid by Walmart or the foundation as part of the development costs associated with campus construction, according to the letter.

The initial 30% of the work should be done by April, Matlock said.

The project overview from Ampirical stated the new campus requires electric infrastructure upgrades for a reliable source of power to meet reliability expectations.

The council also approved money for drainage analysis projects across the city.

Meshek & Associates of Tulsa, Okla., will analyze 120 acres in the East Central Avenue and East Battlefield Boulevard area for $31,800 and 180 acres in the Water Tower Road and Southeast Eighth Street area for $28,650, according to council documents. Flooding in those areas has been a problem for many years, said Dennis Birge, city transportation engineer.

One College Place subdivision resident addressed the council about the flooding in his backyard. He asked the council to approve the money for the Water Tower Road and Southeast Eighth Street area analysis.

The plan is for Meshek to come up with solutions -- one short-term and two long-term -- to address flooding in those two areas, Birge said.

The council also approved paying $800,000 to FTN Associates of Fayetteville to do a city drainage analysis. The work will be done in phases, and the first phase will cost $70,400, according to council documents. The initial phase will mostly be a collection of data, Birge said.