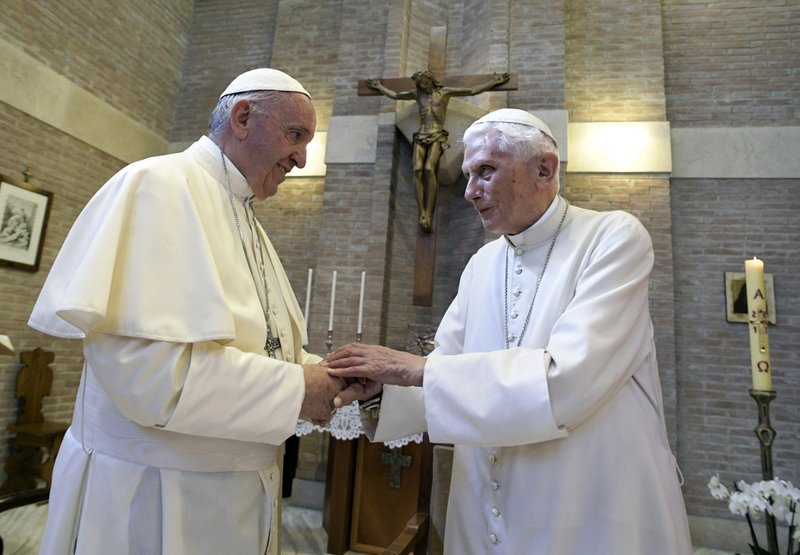 FILE - In this June 28, 2017, file photo, Pope Francis, left, and Pope Benedict XVI, meet each other on the occasion of the elevation of five new cardinals at the Vatican. Retired Pope Benedict XVI has broken his silence to reaffirm the value of priestly celibacy, co-authoring a bombshell book at the precise moment that Pope Francis is weighing whether to allow married men to be ordained to address the Catholic priest shortage. (L'Osservatore Romano/Pool photo via AP, File)

VATICAN CITY -- The Vatican on Monday sought to downplay the decision by retired Pope Benedict XVI to reaffirm the "necessity" of a celibate priesthood at the same time that Pope Francis is considering ordaining married men, calling his book a mere contribution that was written in full obedience to Francis.

The Vatican's editorial director, Andrea Tornielli, penned an editorial that sought to put Benedict's book in the context of a continuity between the two popes. He noted that Francis, too, has upheld the "gift" of priestly celibacy and refused to make it optional across the board.

The French daily Le Figaro late Sunday published excerpts of the book, From the Depths of Our Hearts: Priesthood, Celibacy and the Crisis of the Catholic Church, co-written with conservative Cardinal Robert Sarah; The Associated Press obtained galleys of the English edition, which is being published Feb. 20 by Ignatius Press.

Benedict's intervention was extraordinary, given he had promised to remain "hidden from the world" when he retired in 2013, and pledged his obedience to the new pope. He has largely held to that pledge, though he penned an essay last year that blamed the sexual abuse crisis on the sexual revolution of the 1960s.

His reaffirmation of priestly celibacy, however, gets to the heart of a fraught policy issue that Francis is expected to weigh in on in the coming weeks, and could well be considered a public attempt by the former pope to sway the thinking of the current one.

The implications for such an intervention are grave, given that conservative and traditionalist Catholics nostalgic for Benedict's orthodoxy are already deeply opposed to Francis, with some even considering Benedict's resignation illegitimate.

The book is likely to fuel renewed anxiety about the wisdom of Benedict's decision to call himself "emeritus pope," rather than merely a retired bishop, and create the unprecedented situation of a former pope living in the Vatican gardens near a current one, and wearing the white cassock of the papacy.

In that light, it is significant that the English edition of the book lists the author as "Benedict XVI," with no mention of his emeritus papal status on the cover.

The authors clearly anticipated the potential interpretation of their book as criticism of the current pope, and stressed in their joint introduction that they were two bishops penning it "in a spirit of filial obedience, to Pope Francis." But they also said that the current "crisis" in the church required they not remain silent.

Francis has said he will write a document based on the outcome of the October 2019 synod of bishops on the Amazon. A majority at the meeting called for the ordination of married men to address the priest shortage in the Amazon, where the faithful can go months without having a Mass.

Francis has expressed sympathy with the Amazonian plight, though it is not clear how he will come down on the issue. While he has long reaffirmed the gift of a celibate priesthood in the Latin rite church, he has stressed that celibacy is a tradition, not doctrine, and therefore can change.

Speaking to reporters last January en route home from Panama, he noted that theologians had debated pastoral reasons to allow for an exception in a particular place. But he said his decision at that time was to say "no."

"I don't feel able to put myself before God with this decision," he said.