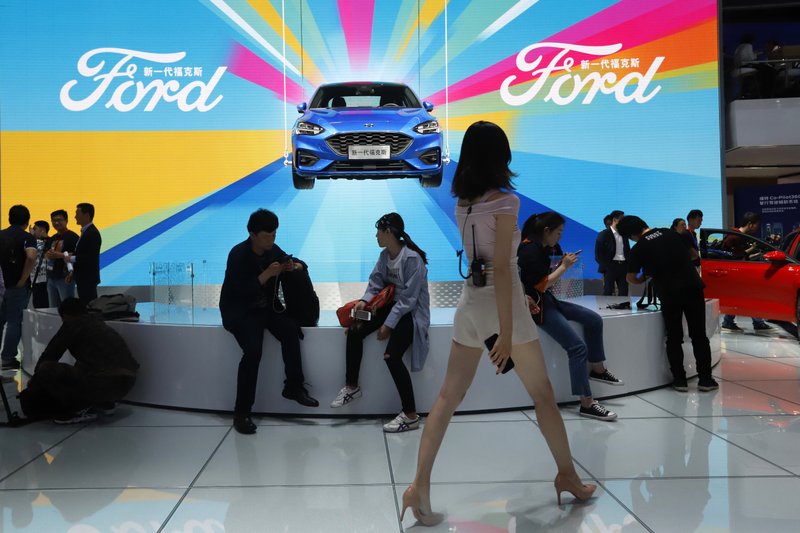 FILE - In this April 25, 2018, file photo, attendees visit the Ford booth during Auto China 2018 show held in Beijing, China. China&#x2019;s government says it will postpone planned punitive tariffs on U.S.-made automobiles and other goods following an interim trade deal with Washington. Sunday, Dec. 15, 2019&#x2019;s announcement came after Washington agreed to postpone a planned tariff hike on $160 billion of Chinese goods and to cut in half penalties that already were imposed. (AP Photo/Ng Han Guan, File)

WASHINGTON -- The Trump administration is dropping its designation of China as a currency manipulator in advance of the signing Wednesday of the first phase of a U.S.-China trade agreement.

The preliminary pact that the two sides are set to sign this week includes a section that's intended to prevent China from manipulating its currency to gain trade advantages.

The action announced Monday comes five months after the Trump administration had branded China a currency manipulator -- the first time that any country had been so named since 1994 during the Clinton administration.

Even while removing China from its currency blacklist, the Treasury Department does name China as one of 10 countries it says require placement on a watch list that will mean their currency practices will be closely monitored. In addition to China, the countries on that list are Germany, Ireland, Italy, Japan, South Korea, Malaysia, Singapore, Switzerland and Vietnam.

Treasury Secretary Steven Mnuchin said the administration had dropped China's designation as a currency manipulator because of commitments in the preliminary trade agreement that President Donald Trump is to sign with China on Wednesday at the White House.

"China has made enforceable commitments to refrain from competitive devaluation, while promoting transparency and accountability," Mnuchin said in a statement accompanying the currency report.

"China is a currency manipulator -- that is a fact," said Sen. Charles Schumer of New York, the Democratic leader in the Senate. "When it comes to the president's stance on China, Americans are getting a lot of show and very little results."

The Treasury Department is required to report to Congress twice a year in April and October on whether any countries are manipulating their currencies to gain unfair trade advantages against U.S. businesses and workers. When a country manipulates its currency to keep it artificially low, its goods become comparatively less expensive overseas -- and other countries' goods become relatively more expensive.

The new report is technically three months late, apparently because the Trump administration had delayed its release until it had achieved the currency commitments from China in the agreement.

The initial decision to brand China as a manipulator had come in a surprise announcement in August, reversing a Treasury finding in May that no country was manipulating its currency. The United States had not put any country on the manipulation blacklist since the Clinton administration branded China a manipulator 26 years ago. Trump had long accused China of manipulating its currency, even though most independent experts concluded that Beijing had stopped doing so years ago.

The designation was largely symbolic. It obliged the United States to enter into negotiations to resolve the currency problem that could ultimately lead to the imposition of economic sanctions such as higher tariffs on Chinese goods -- something the Trump administration was already doing in its trade war with China.

Scott Kennedy, a specialist on the Chinese economy at the Center for Strategic and International Studies, said putting China on the list last year had been a "political step" designed to pressure Beijing in the middle of trade talks.

"China has not been manipulating its currency so this is just recognizing reality," said David Dollar of the Brookings Institution, a former Beijing-based Treasury Department official. "The phase one deal confirms this so it would have been inconsistent for the U.S. to sign the deal and continue to call China a manipulator."

The Treasury Department report criticized Beijing for turning away from economic liberalization to a more state-directed approach and "increasing reliance on non-market mechanisms."

China's growing use of government subsidies and coercive trade practices was "distorting" its relationships with key trading partners, the report added.

The president has long accused China of depressing the yuan's value to make its products more affordable for foreign customers, thus contributing to the chronic trade imbalance with the United States.

One dollar now buys about 6.9 yuan, little changed from August and up about 2% over the past year.

The text of the initial trade deal is to be made public sometime after Wednesday's signing.

It is expected to include China's commitments to respect American intellectual property and not manipulate its currency. U.S. officials also anticipate $200 billion in new purchases that should help reduce a trade deficit and repair some of the damage suffered by farmers.

But even that political victory leaves Trump confronting the same China conundrum that has plagued his predecessors. The broad and bipartisan agreement in Washington is that American presidents have for decades been hoodwinked by a China that has often failed to deliver on its promises.

Trump and his lieutenants insist that this time is different, that experts who see phase one as a rebranding of old guarantees are wrong. Unlike agreements negotiated by previous administrations, this one is enforceable, they say, and there will be real and immediate economic repercussions for China if it comes up short.

"We think it was a good negotiation, we think it will make a real difference," U.S. Trade Representative Robert Lighthizer told reporters on Dec. 13. "A skeptic would say 'we'll see' and that's probably a wise position to take. But our expectation is that they keep their obligations and in any event, they're enforceable."

The signing of the initial agreement caps a rocky two-years of trade conflict between the two nations in which punitive tariffs were imposed on billions of dollars of products from each nation. The battle escalated uncertainty and caused businesses to pull back on their investments, slowing global growth. It also roiled financial markets with fears that the trade war could become serious enough to push the U.S. economy into a recession.

Information for this article was contributed by Martin Crutsinger and Paul Wiseman of The Associated Press, by David J. Lynch of The Washington Post and by Shawn Donnan and Jenny Leonard of Bloomberg News.