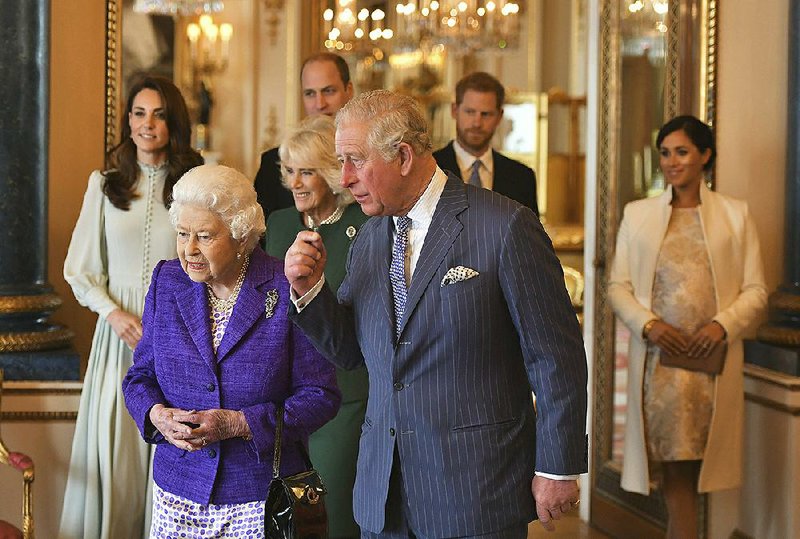 Britain’s Queen Elizabeth II (front left), shown last year with members of the royal family, said in a statement Monday that “there will be a period of transition” as Harry and Meghan spend time in both Canada and the U.K. More photos at arkansasonline. com/114queen/.

SANDRINGHAM, England -- Britain's pragmatic queen brokered a deal Monday to secure the future of the monarchy, charting a course for Prince Harry and his wife, Meghan, that allows them to live part time in Canada while still remaining firmly tied to the House of Windsor.

The decision came after a meeting at Queen Elizabeth II's Sandringham estate in eastern England that sought to resolve the conundrum of what to do with royals who only want the job part time. The British monarch said in a statement that the gathering of senior royals was "constructive," and that it had been "agreed that there will be a period of transition" to sort things out during which Meghan and Harry will spend time in both Canada and the U.K.

"My family and I are entirely supportive of Harry and Meghan's desire to create a new life as a young family," the queen said in a statement. "Although we would have preferred them to remain full-time working members of the Royal Family, we respect and understand their wish to live a more independent life as a family while remaining a valued part of my family."

The meeting marked the first face-to-face talks with Harry since he and Meghan unveiled their wish last week to step back from their royal roles, become financially independent and split their time between Britain and North America. The meeting reflected the queen's desire to contain the fallout from the announcement, which was not discussed with senior family members in advance.

The queen said after Monday's meeting that these were "complex matters for my family to resolve, and there is some more work to be done, but I have asked for final decisions to be reached in the coming days."

One of the tougher questions that needs to be worked out is precisely what it means for a royal to be financially independent and what activities can be undertaken to make money. Other royals who have ventured into the world of commerce have found it complicated.

Sophie, the countess of Wessex, sought to keep her public relations firm going after her marriage to the queen's third son, Prince Edward, only to find herself embroiled in controversy when she was tricked by the "Fake Sheikh" -- Mazher Mahmood, an undercover reporter offering a lucrative contract for her firm.

Sophie hinted that if the "sheikh" paid for the firm's services he would get greater publicity because of her royal role. In the end, both Sophie and Edward, who ran a television company, gave up their businesses to become full-time royals in 2002.

Prince Andrew, who was a U.K. trade envoy, has faced heated questions about his relationship with the late convicted sex offender and financier Jeffrey Epstein, whom Andrew has said was beneficial to making useful contacts. The queen's second son has relinquished royal duties and patronages after being accused by a woman who says she was an Epstein trafficking victim who slept with the prince.

Harry and Meghan also face questions about paying for security, which is currently taxpayer-funded. Home Secretary Priti Patel refused to comment, but said safety was a priority and added that the "royal family themselves need some time and space for them to work through the current issues that they're dealing with."

Meghan, who is American, has longstanding ties to Canada, having lived in Toronto while filming the TV series Suits. On Friday, she returned to Canada, where the couple and 8-month-old Archie spent a six-week holiday break out of the public eye.

Bob Morris, honorary senior research associate at University College London's Constitution Unit, said that the crux of the matter lies in the difference between being a celebrity and having royal status.

"Royal status sets you apart, it gives you special role in our society," he said. "It is very difficult for you to put the hat on and take it off. You cannot be half royal or royal part of the time. You can switch it off and on, and it seems to me the royal identity would always be the dominant one."

Some of the challenges are enshrined in the law devised some 20 years ago after an inquiry that followed Sophie's brush with the fake sheikh. The rules are aimed at ensuring working royals do not exploit their status to profit in business.

Under the guidelines, the royals must consult the most senior member of the royal household before taking on a business activity -- a measure that would encroach on Harry and Meghan's independence.

Information for this article was contributed by Helena Alves of The Associated Press.