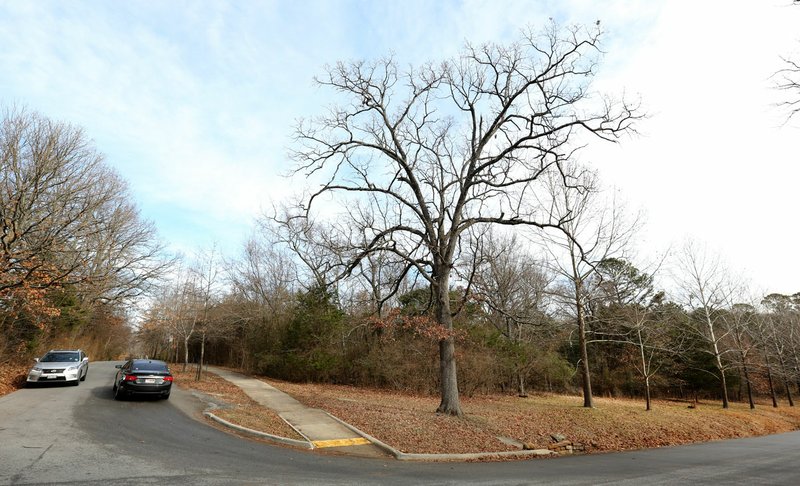 FAYETTEVILLE -- An early phase of a project to develop Markham Hill passed the Planning Commission on Monday.

Commissioners voted 7-0 to approve a preliminary plan for 26 single-family lots near the west end of Markham Road, west of the University of Arkansas campus. Commissioners Tom Brown and Rob Sharp were absent.

The plan before the commission covered about 10 acres of a 24-acre planned zoning district at the the top of the hill. The larger area includes Pratt Place Inn and Barn, but the part commissioners looked at is undeveloped.

Monday was the fourth time the commission viewed the plan. The applicants, Specialized Real Estate, Ecological Design Group and Flintlock Architecture and Landscape, made revisions relating to the impact to trees and street improvements.

The City Council in 2018 approved two requests to rezone the 144-acre property after several contentious meetings. One request was to change the planned zoning district at the top of the hill. Specialized presented plans for more than 5,000 square feet of event space, 12,000 feet of restaurant and commercial space, 80 hotel rooms and 43 homes.

The second request rezoned the rest of the hill from a purely single-family zone to one allowing a variety of housing types at a higher density, with 44 acres left as a preserve. Specialized agreed to a 476-unit cap on the residential development.

A majority of residents who spoke during the four Planning Commission meetings voiced opposition to the plan for 26 lots. On Monday, 15 people spoke.

Steve Guinn, a Halsell Road resident, said he's been against the project since its beginning.

"Once we destroy the trees, once we destroy the entire hillside -- and I believe Markham Hill may be one of the last undeveloped hills in Fayetteville, Arkansas, I could be wrong about that -- it's gone forever," he said. "We can't bring it back."

Guinn said he knew Evangeline Archer and Joy Markham, for whom the area is named, and they would have wanted the area preserved.

Several people spoke of Native American and historical artifacts and remnants in the area, and the need for a formal study to be done, with the results released to the public. Others called on the property owners to consider selling the land to a conservation agency.

Per city code, the Planning Commission can only deny a preliminary plan under six criteria: if it isn't submitted correctly; if it would violate local, state or federal law; the developer refuses right of way or easement dedication; if the plan would create or compound a dangerous traffic condition; water or sewer is not available; or the developer refuses to comply with on- or off-site improvement requirements.

Planning staff recommended the commission approve the plan because it meets the city's standards.

Commissioner Quinten Canada said he read through the proposal and couldn't find any grounds to deny it.

"There's nothing at this point that we could do to deny this, unless we want to get sued," he said.

In other business, the commission approved some variances to city code for a proposed mixed-use development southwest of Cleburn Street and North College Avenue. The variances had to do with on-street parking spaces at Cleburn and Pollard streets, the facade of buildings and a wall to shield lights from cars.

Eight residents spoke. Several cited concerns with overflow parking going into neighborhoods near Wilson Park, runoff, and traffic safety with cars coming in and out of the development.

The proposal includes 24 apartments mixed with businesses in two buildings separated by a courtyard. About 50 parking spaces are proposed for the site.