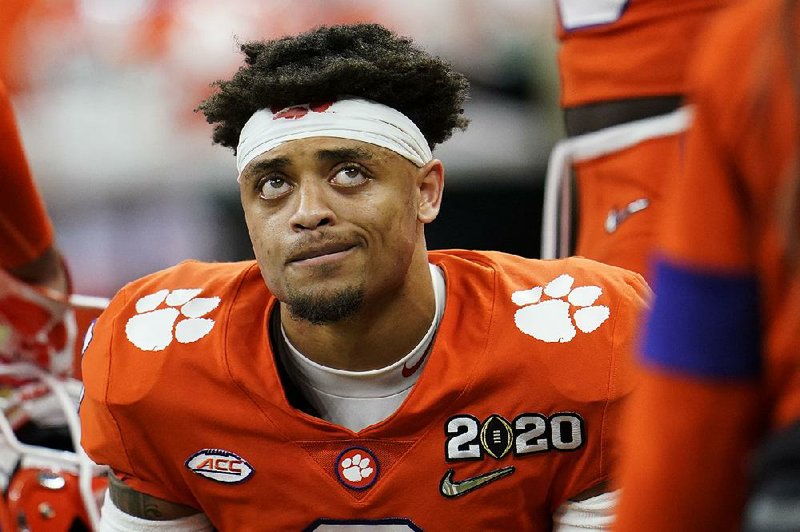 Clemson cornerback A.J. Terrell sits on the bench during the second half Monday’s College Football Playoff championship game. LSU piled up 628 yards of offense against Clemson.

But just like that, Heisman Trophy winner Joe Burrow and his collection of offensive playmakers ran past the country's best defense in Clemson -- just like they did to everyone else.

Clemson's bid for a second straight national championship -- and a dynasty of three in four seasons -- ended in a flurry of pitch-perfect touchdown passes from Burrow to Ja'Marr Chase and Thaddeus Moss in a 42-25 loss.

"It's been a long time since I've stood in front of a team after a loss," said Clemson Coach Dabo Swinney, whose team's 29-game winning streak was snapped.

Clemson's secondary had surrendered just nine touchdown passes in its first 14 games. It gave up three to LSU in the opening half, including a pair as the SEC champions went from 10 points down (its biggest deficit of the year) early in the second quarter to up 28-17 by halftime.

In the end, Clemson gave up 1,144 yards in its two playoff games, including a semifinal win over Ohio State. It had allowed just 245 per game during its first 13.

Burrow picked on what was the strength of Clemson's defense, its back seven.

Clemson cornerback A.J. Terrell, among the team's most consistent and talented defenders, was shredded by Burrow and the LSU receivers.

Terrell was outrun by Chase on his first score, a 52-yard touchdown that tied things at 7-7. Then he was the victim once more as Burrow practically placed the ball in Chase's hands just a few feet over Terrell's shoulder for a 14-yard scoring pass as LSU went ahead for good, 21-17.

Clemson's confusion on the back end was evident on LSU's final first-half touchdown as Moss was standing by himself in the end zone awaiting Burrow's simple 6-yard flip to make it 28-17 with 10 seconds before the half.

If any team was capable of slowing down LSU, it figured to be Clemson.

The Tigers topped the country in defense, allowing just 256 yards a game. Coordinator Brent Venables got the most he could out of versatile defenders such as Butkus Award-winning linebacker Isaiah Simmons, safeties Tanner Muse and Nolan Turner, and cornerback K'Von Wallace.

Clemson lost four linemen to the NFL from last year's national champions, and used Simmons and Wallace to speed rush from further back. In this one, LSU's line was up to the task, and Burrow had plenty of time to find open receivers.

Clemson's offense didn't help much either. Quarterback Trevor Lawrence was just 18 of 37 for 234 yards and no touchdowns. He was also sacked twice and hit hard on several other occasions.

Still, Clemson rallied at the start of the third quarter to cut the lead to 28-25 on Travis Etienne's 3-yard touchdown and a two-point conversion.

But it was more of the same for Clemson's defense, which lost its leading tackler in linebacker James Skalski to a targeting call in the second half.