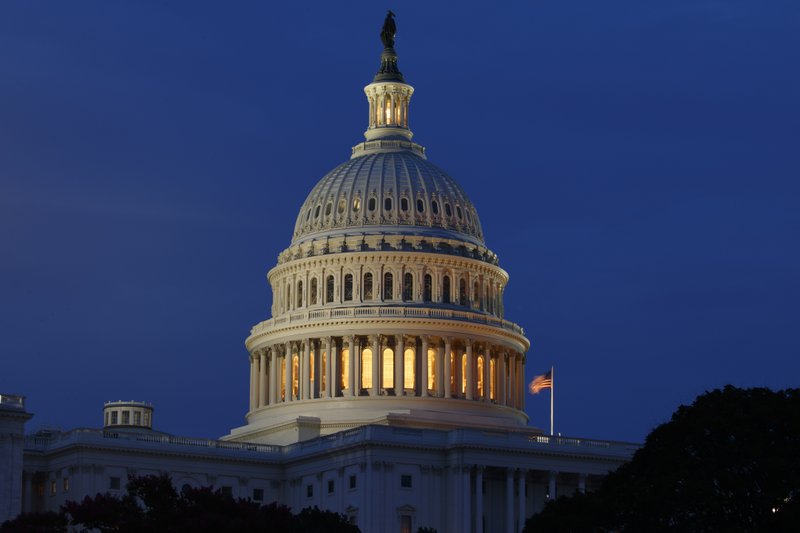 FILE - This July 16, 2019, file photo shows the Capitol Dome in Washington. The U.S. budget deficit through the first three months of this budget year is up 11.8% from the same period a year ago, putting the country on track to record its first $1 trillion deficit in eight years. The Treasury Department said Monday, Jan. 13, 2020, that the deficit from October through December totaled $356.6 billion. (AP Photo/Carolyn Kaster, File)

The U.S. budget deficit through the first three months of the federal budget year is up 11.8% from the same period a year ago, putting the country on track to record its first $1 trillion deficit in eight years.

Both government spending and revenue set records for the first three months of this budget year, but spending rose at a faster clip than tax collections, pushing the deficit total up.

The Congressional Budget Office is projecting that the deficit for the current 2020 budget year, which began Oct. 1, will hit $1 trillion and will remain over $1 trillion for the next decade. The country has not experienced $1 trillion annual deficits since the period from 2009 through 2012 after the 2008 financial crisis.

The deficit for the 2019 federal budget year, which ended Sept. 30, was $984.4 billion, up 26% from the 2018 imbalance, reflecting the impact of the $1.5 trillion tax cut that President Donald Trump pushed through Congress in 2017 and increased spending for military and domestic programs that Trump accepted as part of a budget deal with Democrats.

The projections of trillion-dollar deficits are in contrast to Trump's campaign promise in 2016 that even with his proposed tax cuts, he would be able to eliminate future deficits with cuts in spending and growth in revenue that would result from a stronger economy.

Accumulating deficits add to the overall federal debt, which totaled nearly $23.2 trillion as of Friday. That figure includes more than $6 trillion the government owes itself, including about $2.9 trillion borrowed from the Social Security Trust Fund, according to Treasury Department reports.

Both the spending and revenue amounts are records for the first three months of a budget year.

Information for this story was contributed by Martin Crutsinger of The Associated Press; and Katia Dmitrieva of Bloomberg News. 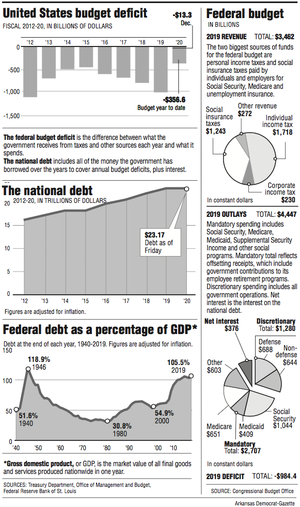