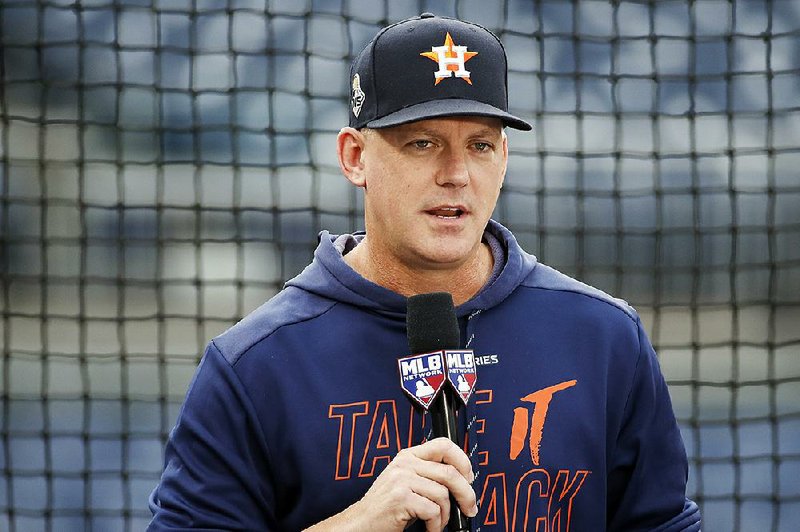 Hinch and Luhnow were fired Monday after being suspended by Major League Baseball for the team's illicit use of electronics to steal signs during Houston's run to the 2017 World Series title and again in the 2018 season.

MLB Commissioner Rob Manfred announced the discipline and strongly hinted that Cora -- the Astros bench coach in 2017 -- will face equal or more severe punishment. Manfred said Cora developed the sign-stealing system used by the Astros. The Red Sox are under investigation for stealing signs in Cora's first season as manager in 2018, when Boston won the World Series.

Houston was fined $5 million, the maximum allowed under the Major League Constitution, as punishment. The Astros also will forfeit their next two first- and second-round amateur draft picks.

The investigation found that the Astros used the video feed from a center-field camera to see and decode the opposing catcher's signs. Players banged on a trash can to signal to batters what was coming, believing it would improve the batter's odds of getting a hit.

Sign stealing is a legal and time-honored part of baseball as long as it is done with the naked eye -- say, by a baserunner standing on second. Using technology is prohibited.

Astros players disputed whether knowing the pitches seconds in advance helped batters. Houston had fewer wins at home than on the road, winning 94 home games and 110 on the road during the two seasons. There was no sign-stealing system on the road.

"While it is impossible to determine whether the conduct actually impacted the results on the field, the perception of some that it did causes significant harm to the game," Manfred said.

Manfred, in his most significant action since becoming commissioner five years ago, said Hinch failed to stop the sign stealing and Luhnow was responsible for the players' conduct, even though he made the claim he was not aware. Manfred said owner Jim Crane was not informed.

An hour after MLB announced its punishment, Crane opened a news conference by saying Hinch and Luhnow were fired.

"I have higher standards for the city and the franchise, and I'm going above and beyond MLB's penalty," he said. "We need to move forward with a clean slate."

Both Luhnow's and Hinch's suspensions for the 2020 season were to be without pay. Crane said he will look outside the organization and internally for candidates to replace Luhnow. If he hires internally, the most likely candidate would be Pete Putila, who was promoted to assistant general manager this offseason.

Crane, who said he learned of the discipline this weekend, was visibly upset during Monday's news conference and insisted that Houston's championship, which culminated in a seven-game World Series victory over the Los Angeles Dodgers, was not tainted.

"We want to be known as playing by the rules," he said. "We broke the rules. We accept the punishment and we're going to move forward ... if you read the report neither [Luhnow or Hinch] implemented this or pushed it through the system, and [it] really came from the bottom up."

Hinch's penalty was among the longest for an MLB manager. Brooklyn's Leo Durocher was suspended for one year by Commissioner Happy Chandler in April 1947 for the "accumulation of unpleasant incidents" detrimental to baseball, and Cincinnati's Pete Rose was banned for life by Commissioner Bart Giamatti in August 1989 for betting on Reds' games while managing the team.

Houston was a big league-best 204-120 during the two years in question, winning its first title. Hinch, a 45-year-old former catcher with a degree from Stanford, was the most successful manager in the history of the Astros, who have won two of the last three AL pennants and came within one victory of another World Series title last year against Washington.

Luhnow, 53, earned an MBA at Northwestern and fostered an analytic-based culture during eight seasons as Astros GM, but also a toxic one with high turnover.

Luhnow said in a statement that he accepts responsibility "for rules violations that occurred on my watch as president of baseball operations and general manager of the Astros," and he apologized to the team and fans for "the shame and embarrassment this has caused."

Then Luhnow defended himself.

"I am not a cheater," the statement said. "Anybody who has worked closely with me during my 32-year career inside and outside baseball can attest to my integrity. I did not know rules were being broken."

Hinch issued a statement through the Astros, saying he was "disappointed in our club's actions within this timeline, and I accept the Commissioner's decision.

"As a leader and major league manager, it is my responsibility to lead players and staff with integrity that represents the game in the best possible way," the statement said. "While the evidence consistently showed I didn't endorse or participate in the sign-stealing practices, I failed to stop them and I am deeply sorry."

Manfred said Hinch was aware of the system but did not tell Luhnow.

"As the person with responsibility for managing his players and coaches, there simply is no justification for Hinch's failure to act," Manfred said.

Current New York Mets Manager Carlos Beltrán, then a player with the Astros, was among the group involved. Manfred said no Astros players will be disciplined because he decided in September 2017 to hold a team's manager and GM responsible for sign-stealing infractions. 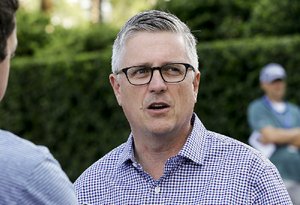