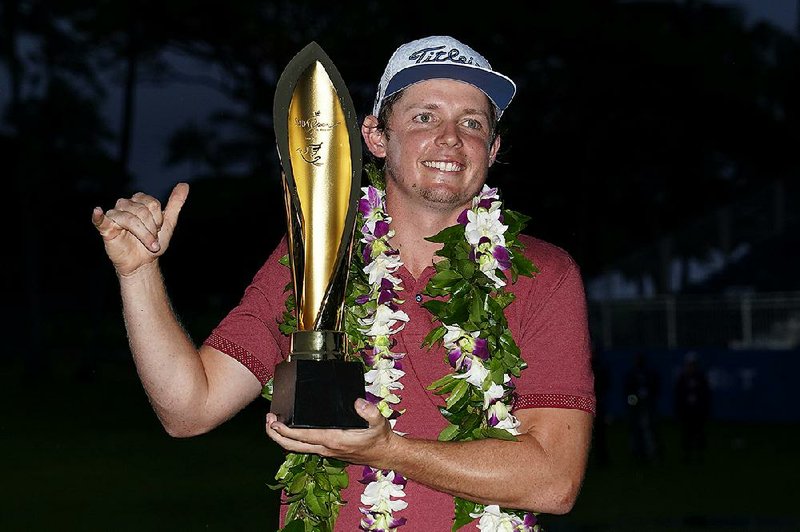 Cameron Smith defeated Brendan Steele in a playoff to win the Sony Open, his first victory on the PGA Tour.

HONOLULU -- Cameron Smith was running out of holes, but not hope.

Smith was two shots behind with two holes to play in the steady rain Sunday at the Sony Open, and Brendan Steele had not shown any signs of cracking. Three holes later, Smith only had to two-putt from 10 feet to win a playoff.

"I just hung in there, and what do you know?" Smith said.

The 26-year-old Australian finally had a PGA Tour title he could call his own. He had won twice at the Australian PGA Championship, and he shared the team title with Jonas Blixt at the Zurich Classic in New Orleans in 2017.

For this PGA Tour victory, his help came from the guy he was trying to beat.

Steele had a three-shot lead when he holed a bunker shot for birdie on the 11th hole and he never trailed the entire day until it fell apart at the end. He missed a 6-foot par putt on the 17th, and then hit a wild hook from the fairway on the par-5 18th and never had a reasonable look at birdie.

On the 10th hole for the playoff, Steele was in ideal position in the fairway, 88 yards from the hole, when he hit wedge over the green. He chipped off the rain-soaked grass and mud to 15 feet and missed the par putt. Smith, who had driven into right rough, chased his shot to 10 feet. He never imagined winning would come down to two putts from short range.

"I thought I had to birdie 17 and do something special on 18," Smith said. "Things fell into place."

He helped with a clutch putt. On the 18th, Smith hit a 3-iron just short and into a bunker, blasted out over the puddles forming on the green to 8 feet and knocked it in for a 2-under 68 to force a playoff.

Steele was trying to win for the first time in just over two years. This was hard to take.

"Everything that could go wrong went wrong today," Steele said after a 71.

The victory assures Smith a spot in the Masters. He also is assured a return to Hawaii next year for the Sentry Tournament of Champions.

"That's been one I've wanted to tick off for a long time, to finally say I've won an event by myself," Smith said. "It's quite good."

They finished at 11-under 269, the highest winning score at the Sony Open in 15 years. The wind finally died to normal strength instead of 30 mph gusts. But the rain was steady, and the course was soaked.

Steele felt that might have cost him on the 10th, which had been playing straight into strong wind all week. At the end, it was nothing more than a strong breeze. The pin was back. The green was soft. Anything at the pin likely would spin off the shelf and leave a long putt, and Smith already was 10 feet away.

"I played the hole six times this week and it's been blowing pretty hard every day," he said. "I don't really have a gauge for it to be blowing just 5 mph or whatever it was. I think I just over played it because of the way it's been the last few days."

A final round that was wet, gray and full came to life in the final hour, which is about how long it took to play the last two holes because the maintenance crew kept having to squeegee the 18th green.

Steele brought possibilities into play when he missed the green to the left on the par-3 17th, pitched to 6 feet and missed his par putt, reducing his lead to a single shot.

Ryan Palmer and Webb Simpson were in the group ahead, both one shot behind. From a fairway bunker, Palmer went with fairway metal and sent it soaring so far to the right that it bounced off the metal railing atop a monster video board, beyond the corporate tent and vanished, presumably in a backyard. He had to return to the bunker and made bogey.

Simpson's wedge skipped off the soaked green and settled 15 feet behind the hole. He narrowly missed the birdie putt, shot 67 and finished alone in third.

Steele, who had to wait 15 minutes to tee off, had to wait another 15 minutes to hit his second shot from the fairway. He went just as far offline as Palmer, just the opposite direction. It bounced off the roof of the tents left of the green and stopped near the ropes lining the 10th fairway. Given free relief from the grandstands, he hit wedge from the muck to 30 feet and two-putt for par.

"The lie was good, the water was fine," Steele said. "It was just a 2-iron to win a golf tournament. It's a hard shot."

Smith holed his 8-footer for birdie for the second playoff in two weeks.