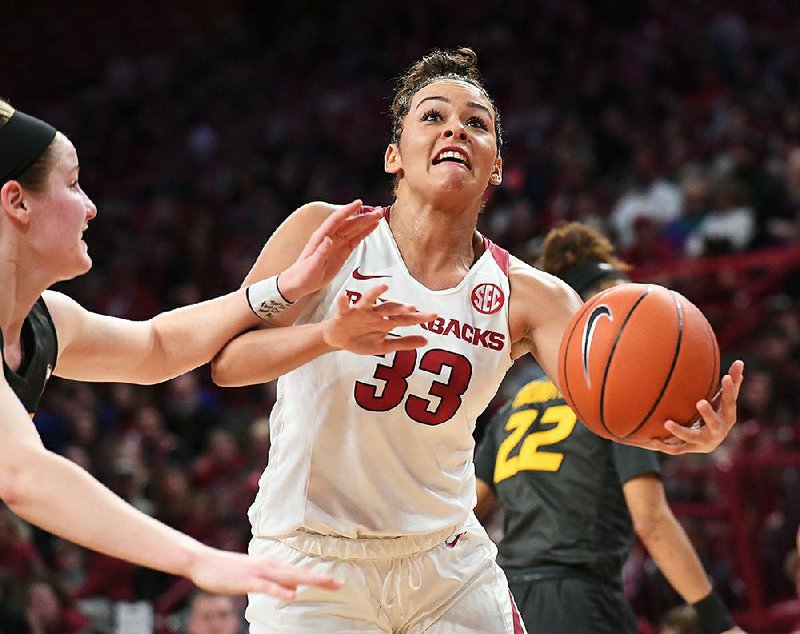 Chelsea Dungee of Arkansas drives to the basket against Missouri on Sunday at Walton Arena in Fayetteville. Dungee had 38 points and seven rebounds as the Razorbacks won 90-73 to bounce back from Thursday’s loss to South Carolina. - Photo by J.T. Wampler

FAYETTEVILLE -- The University of Arkansas started an icy 1 for 15 from the floor Sunday afternoon, but junior Chelsea Dungee and the No. 21 Razorbacks warmed up and rolled to a 90-73 victory over Missouri in front of a crowd of 4,172 in Walton Arena.

Dungee poured in a game-high 38 points, as Arkansas scored 56 second-half points and dominated the final two quarters to snap a seven-game losing streak against the Tigers.

Dungee bounced back strong after a subpar game in Thursday's loss to No. 4 South Carolina. The 5-11 guard missed her first 11 shots and finished 4 of 18 from the floor against the Gamecocks, but she said that didn't affect her confidence.

"I just know that I can hit that shot," Dungee said. "I hit that shot every day in practice. That's something I work [on], and really it's just a matter of when it's going to go in. I shoot the same way every time."

Dungee finished 12 of 23 from the floor, including four three-pointers, en route to 38 points -- the second highest total for an SEC player this season. She also had 21 second-half points on 6-of-10 shooting and left the game with more than three minutes remaining with the Razorbacks leading comfortably.

Arkansas (14-3, 2-2 SEC) opened the second half with eight consecutive points and held Missouri to one field goal for more than six minutes to start the third quarter to take control.

Missouri's leading scorer Amber Smith was plagued by foul trouble the entire game. But the senior converted a three-point play to get the Tigers within 59-50 with 5.5 seconds left in the third quarter. But Dungee quickly took away any Missouri momentum by sinking a three-pointer at the buzzer to give Arkansas a 12-point advantage.

Missouri Coach Robin Pingeton said Arkansas players made no secret about getting the ball to Dungee.

"I think Chelsea's just a phenomenal player, she just finds a way," Pingeton said. "This is the kind of teammates she has. I heard them saying, 'Hey, nobody can stop Chelsea. Get the ball to Chelsea.' You know you've got a special squad when your teammates are recognizing a tough matchup on the other end. And they're doing a great job getting the ball in her hands."

Arkansas junior Taylah Thomas said they find ways to get Dungee the ball when they know she has a favorable matchup,

"When we have a matchup like that, it's not a time to be selfish," Thomas said. "If we know we can take her off the dribble we need to find ways to get her open. So if that means screening or getting out of the paint to get my man out of there, just doing whatever it takes to get her open."

Arkansas Coach Mike Neighbors said his team did a good job of regrouping after the bad first quarter but not before he let his players know about it. He also wasn't shocked at all but Dungee's performance.

"She [Dungee] had it from the get-go. She missed a couple shots but she had that Chelsea look of take over, and then it just kept snowballing once we got the foul situation going like we wanted it. I thought she was big in kinda setting the tone for everybody else saying, 'We're gonna be tough.' And she was and I thought everybody else just followed suit."

The Tigers (4-13, 1-3) led by as many as 12 early with Arkansas' slow start. But the Razorbacks got within 34-30 at halftime and used the third-quarter surge to take over.

Freshman Hayley Frank led Missouri with 19 off the bench, while freshman Aijha Blackwell chipped in 18. Hannah Schuchts, a 6-2 senior, finished with a game-high 12 rebounds.

Arkansas senior Kiara Williams was in street clothes Sunday. She missed the first 10 games with a foot injury but is now out with an injury to the other foot, Neighbors said.

The 6-1 Williams led the Razorbacks in rebounding a year ago and had started to play increased minutes over the last six games.

"We'll monitor it and see how it goes," Neighbors said. "The initial [report] was just we don't think it will be as long as last time. That's about all I know today."