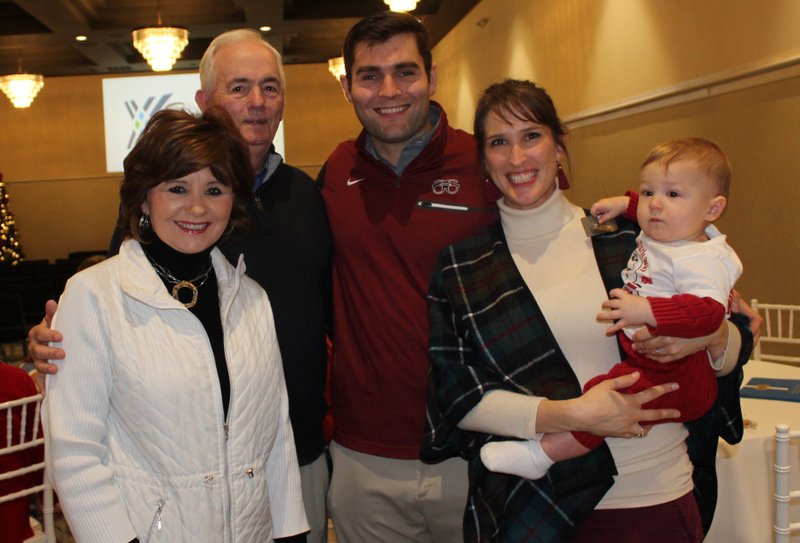 What: The foundation, Burlsworth Trophy finalists and friends gathered on the eve of the trophy winner announcement. Kenny Willekes, Michigan State University senior defensive end, took home the 10th Brandon Burlsworth Trophy for the nation’s most outstanding football player who started his career as a walk-on.

Where: The Apollo on Emma in Springdale

Willekes, who received no scholarship offers from Division I schools, was invited to walk on at Michigan State, where he red-shirted his freshman year.

According to a press release, Willekes was named "a preseason All-America selection and last year's Big Ten Defensive Lineman of the Year, has 59 tackles this season with 24 solo tackles, including 6.5 sacks and two fumble recoveries. Willekes was named Defensive Player of the Week by the Big Ten and the Walter Camp Football Foundation after recording seven tackles with 2.5 tackles for loss and 1.5 sacks against Tulsa earlier this season. Willekes, 6-foot-4, 260 pounds, suffered a broken fibula in a bowl game to end last season and rehabbed in the offseason. He is the active career leader in tackles for loss per game (1.22)."

The foundation and trophy are in memory of the late Brandon Burlsworth, who went from walk-on offensive lineman for the Razorbacks to All-American to being selected as a third-round draft pick by the Indianapolis Colts.

Burlsworth Trophy proceeds help support the Burlsworth Foundation, whose mission is "to support the physical and spiritual needs of children, in particular those who have limited opportunities." The nonprofit organization's offerings include Burls Kids, which allows underprivileged children the opportunity to visit a college campus and see their first Arkansas Razorbacks football game; the Burlsworth Character Award, available to every high school football program in the country; and Eyes of a Champion, which provides comprehensive eye exams and glasses to children in need in Arkansas, Texas and Oklahoma with a goal of being active in all 50 states.

The National College Football Awards Association welcomed the Burlsworth Trophy in October. Other association awards include the the Heisman Trophy, the Outland Trophy, the Doak Walker Award and the Broyles Award.