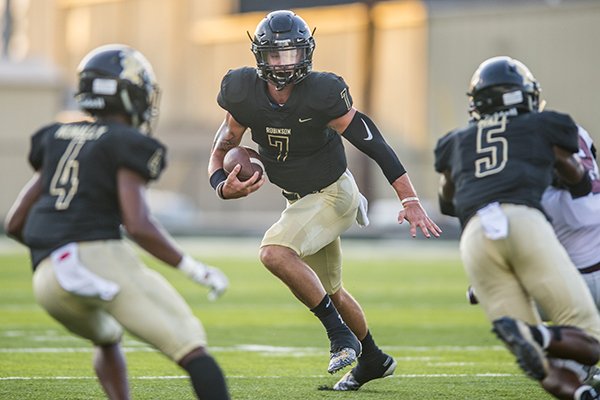 JT Towers of Joe T. Robinson runs with the ball during a game against Springdale on Friday, Aug. 30, 2019, at Charlie George Stadium in Little Rock. - Photo by Jeff Gammons

Joe T. Robinson linebacker JT Towers' path to receiving a scholarship offer from the University of Arkansas on Monday and committing to the Hogs has been one of overcoming adversity.

He's endured the loss of a brother, a serious car accident and an injury his senior season that would've likely sidelined others.

His brother Zack suffered brain trauma in a game while playing linebacker for Star City in 2012 and died two years later.

Towers then missed his sophomore season at Glen Rose after the car he was in with his mother and stepfather was hit by a semitrailer on Interstate 30 near Haskell.

"They got T-boned by an 18-wheeler that had turned sideways on a two-lane highway," Joe T. Robinson defensive coordinator Brian Maupin said. "The back of the semi hit right in the back seat where JT was sitting. His entire throwing shoulder and right arm was completely mangled. He had to have like three surgeries on his shoulder. He severed a tendon in his hand. His middle finger was bent, and he couldn't move it because the ligament was severed. The scars are ridiculous.

"He was about a half of a centimeter away from losing his right eye."

"As a quarterback, he had to completely relearn how to throw the football, and in less than 12 months he was an all-state quarterback at Glen Rose," Maupin said.

Towers moved to Little Rock and enrolled at Robinson for his senior season. He was moved to linebacker, a position he had never played.

His dream to play at Arkansas took a serious hit when he broke the big toe of his right foot while also suffering ligament damage in the opening game of the season against Springdale. It appeared he would be out for the season.

He missed the next two games before trying to play a series against Fountain Lake in anticipation of a Week Five showdown with Arkadelphia.

"It was his first time trying to play since the injury, and the pain was just so excruciating," Maupin said. "He didn't know if he could do it. He felt like a shell of himself, and you could just feel the weight of the world on his shoulders that night. I just remember him crying his eyes out on the bench and me holding him and praying together and telling him it was all going to work out."

He fought through the pain the next week against the Badgers, then the rest of the season while helping the Senators win the Class 4A state title.

"He ended up putting together one of the best seasons in program history and winning a state championship," Maupin said.

"He's that rare breed of a kid that's ultra motivated, ultra intelligent and self-aware but is still blindly obedient, and that's so rare in kids today," Maupin said. "Kids today have a plan and have a motive, they follow their plan, their motive. What their parents say, what a trainer said. Sometimes their own intelligence and motivation and ambitions block their ability to receive coaching, and JT was awesome to coach."

Towers, who will make his official visit to Arkansas on Jan. 24, will have surgery on his toe Jan. 29 and will have about three to four months of rehab before he arrives in Fayetteville.

"He should be full go by the time he reports, and shouldn't miss anything this summer," Maupin said.