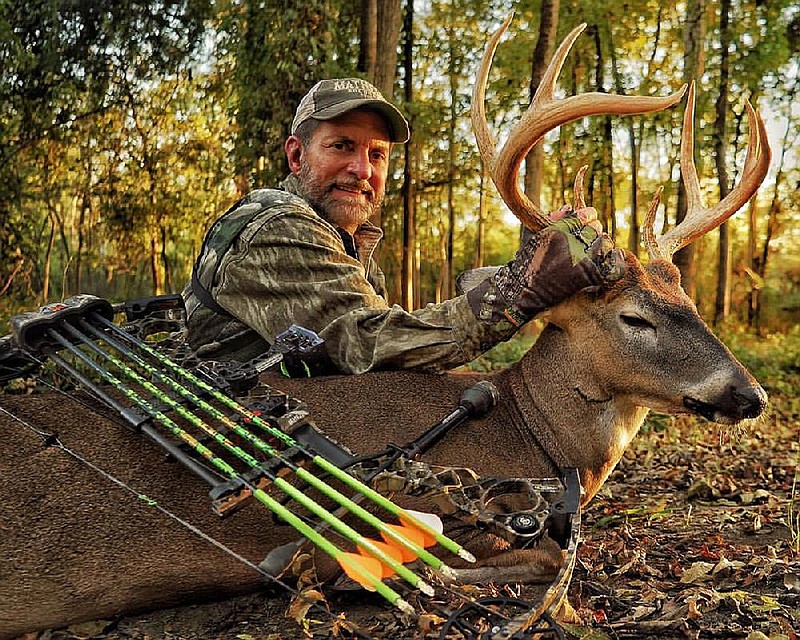 Will Primos of Laurel, Miss., credits key people and timing for helping him build a worldwide hunting and television empire.

EDITOR'S NOTE: One year ago, Bryan Hendricks joined Will Primos for a deer hunt at Cottonmouth, Primos's legendary hunting property on the Mississippi River. Afterward, Primos reflected on his career as an entrepreneur and entertainer.

Will Primos has led the ultimate hunting life, but it all started with a blackbird.

Primos said he went on his first hunt at age 5 with his cousin and hero, Jimmy Primos.

"He took me on my first hunt. For a blackbird. I killed it with a CO2 pellet gun that he gave me," Primos said. "As soon as I killed that bird, he said, 'OK, you need to learn that when you kill something, you got to eat it.'

"I plucked that blackbird," Primos added. "I left the skin on, put it on a stick, put it over the fire in the backyard and roasted it. And I ate that blackbird."

Far from eating crow, that blackbird supper was the beginning of a worldwide name in the hunting industry.

Primos. It's a stand-alone name, but the man behind the name credits its success to the teamwork of many people over decades that shared a common vision. One was Jennifer Bricknack, an early Primos employee who asked Primos to consider a three-word phrase she'd coined as a marketing slogan.

At that time, "For the Woods" was the slogan, but Primos wanted something to reflect a broader vision.

Primos was born into a family of restauranteurs that had been in business since 1927. Primos prospered in that world and was poised to carry on the family business.

Primos also loved to hunt deer, ducks and turkey. He didn't like the retail turkey calls that were available in the late 1960s and early 1970s, so Primos made his own. Glowing reviews from family and friends gave Primos the confidence to rent a booth at a hunting show.

One major development was the introduction of the True Double turkey call in 1976, a product that it is still in production.

Another was in 1986, when Primos hired Jimmy Primos.

"I paid him $4 an hour, which was minimum wage at the time," Primos said.

Jimmy eventually became the chief operating officer of Primo Hunting. He is also the long-suffering foil for many of Will's pranks.

In 1988, Will Primos left the restaurant business and channeled all of his energy into his burgeoning game call business. A watershed moment was when Primos rejected a marketing representative's idea for an advertising campaign. Exasperated, the rep suspended the project. He challenged Primos to find 10 people inside the firm and 10 people outside the firm to answer a list of questions. They were to discuss the answers and formulate one definitive, consensus answer for each question.

The last question asked why a prospective customer should choose a Primos product from a shelf instead of a similar competing product in similar packaging.

"The answer we chose as a group is, 'Because they like you and because they trust you,' " Primos said. "That became the defining moment of the company. We were already doing that, but we hadn't defined it to our employees."

Also, Primos said that every employee is authorized to take care of the customer.

"You think advertising is expensive? Try messing with a customer and see how expensive that is," Primos said. "Take care of them and provide them with a product and a service, and they'll come back time and time and time again."

Timing is crucial for success, Primos said, not just in product development but in the appearance of key people.

"The two that come to mind are my patent attorneys in Salt Lake City, Grant Foster and Brett Foster," Primos said. "If I hadn't met them and they hadn't helped me understand that legal world of intellectual property, patents and trademarks that I was dealing in, it would have been a disaster.

"If I hadn't met Paul Hogue and Bill Korn that had expertise in different ways of molding products so that I could make the right products for the public, I couldn't have done what I have done. The list just goes on and on."

Cosmic timing is as important as situational timing. Primos said that he came along with the right products and the right vision at the right time in history.

"I don't know that I could do what I did if I tried to start it today," Primos said. "When I started, you could take a turkey call made from latex rubber, print a card, put it in a plastic ziplock bag, and that was your packaging. There was no UPC code. There was no clam shell packaging. You couldn't even think about doing that today."

On the other hand, technology and its instant access to mass markets create opportunities for new entrepreneurs.

"Every year, every decade, every century has opportunities that other ones don't have," Primos said.

Like the late Jerry McKinnis, Primos recognized the potential of using cable television to embed the Primos Hunting brand into the entertainment industry. In doing so, Primos became an eponymous presence in the visual hunting media.

"I never wanted to be a hunting hero or a celebrity in the hunting world," Primos said, "but the camera liked me and I had an ability to teach."

Another example of impeccable timing occurred when Primos realized he had taken the company as far as he could.

Vista Outdoor Inc., which owns Bushnell, Savage and Federal, bought the Primos brand and its assets.

Naturally, Primos still cares about the company's integrity and quality, but he also understands that it's somebody else's baby now.

"You can be protective of the brand to a point, but once you let go of the reins and let somebody else have them, you can only wish and hope," Primos said.