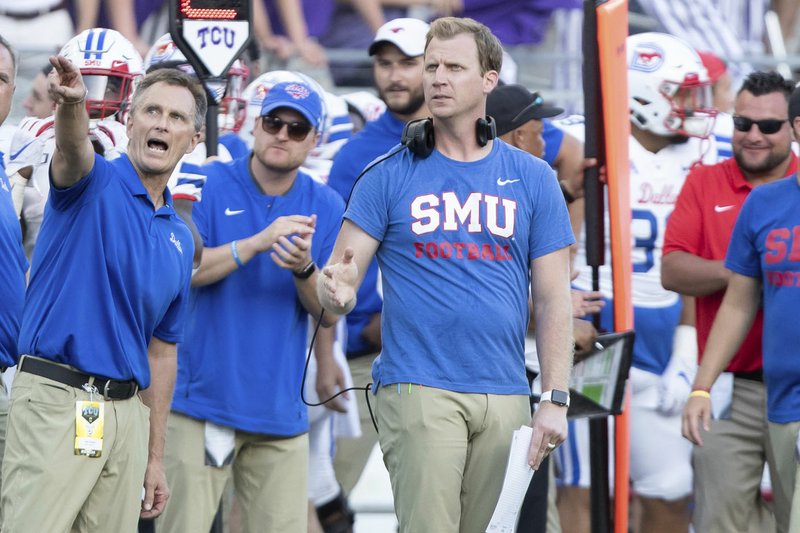 How would you like a job where you wear shorts to work in January while the temperature is 77 degrees and ocean breezes await the second you step outside?

That's one of the perks for former Shiloh Christian quarterback Rhett Lashlee, who was hired Jan. 4 as the offensive coordinator at the University of Miami. The location for Lashlee's new job is a monumental change from the one season Lashlee spent as offensive coordinator at the University of Connecticut, where the average overnight temperature for January is 17.2 degrees.

"I won't have to buy a snowblower, or what I call a 'snow lawnmower,'" Lashlee said when reached by phone in Coral Gables, Fla., on Friday.

Snow lawnmower, for sure, is an apt description from Lashlee, who clearly hasn't forgotten his Arkansas roots. Rhett's family includes his wife, Lauren, formerly of Rogers, and a pair of twins -- two boys and two girls. Thomas and Hudson are 9 and the girls, Rowyn and Scarlet, are 3.

"It's never easy on a family when you have to move, but my wife Lauren is awesome," Lashlee said. "As the wife of a football coach, she's a single parent about half the time anyway, and our kids are resilient. We've moved enough where they kind of know what to do by now."

Anyone familiar with college football knows the reputation of the Miami Hurricanes, known simply as "The U." Miami has won five national championships with coaches like Jimmy Johnson, Dennis Erickson and Butch Davis, and elite players like Michael Irvin, Ray Lewis, Warren Sapp and Arkansas native Cortez Kennedy.

But the swagger that once intimidated opponents has long disappeared for the Caines, which last won a national championship in 2001. A shutout loss to Louisiana Tech prompted Miami head coach Manny Diaz to bring in Lashlee from Southern Methodist, where he directed an offense that averaged nearly 42 points per game for a team that went 10-3 in 2019.

The Mustangs finished No. 9 in total offense and No. 13 in passing offense among 130 teams in Division I. It's that uptempo, wide-open approach Diaz hopes will revive a stagnant offense for the Hurricanes. Miami finished 6-7 in 2019, capped by a 14-0 loss to Louisiana Tech in the Independence Bowl.

"Rhett has directed some of the most innovative offenses in college football in recent years," Diaz told reporters shortly after hiring Lashlee. "We are excited to see how Rhett will look to spread the ball around and utilize our athletes on the offensive side of the ball."

Lashlee, 36, has come a long way -- literally and figuratively -- since he was setting passing records at Shiloh Christian in the late 1990s. Lashlee led Shiloh Christian to a 15-0 record in 1999, which included a 70-64 victory over Junction City in what is still considered as one of the greatest games in the history of high school football.

Lashlee passed for 672 yards and eight touchdowns for the Saints, who trailed Junction City 51-35 at halftime.

"I really don't mention that except, maybe, in recruiting," said Lashlee, who ranks third in Arkansas high school football with 13,189 career passing yards. "I let the quarterbacks know who we're recruiting we're going to throw the football."

Lashlee broke out on his own after being closely associated with his former high school coach Gus Malzahn for much of his coaching career. Lashlee began as an assistant coach for Malzahn at Springdale High and he was on staff when the Bulldogs won a state championship with a 14-0 record in 2005. He also had plenty of success with Malzahn during two stints at Auburn and one at Arkansas State, when the Red Wolves finished 10-3 in 2012 and beat No. 25 Kent State in the GoDaddy.com Bowl in Mobile, Ala.

Lashlee said he still stays in contact with Malzahn and Chris Wood, his former coach and current head coach at Springdale Har-Ber. Lashlee said he's learned plenty from many coaches, including the one year he spent at Samford as offensive coordinator for Pat Sullivan, the former Heisman Trophy winner who died in December.

"I've been blessed to be associated with a lot of great coaches," Lashlee said. "I'd be lying if I said I wasn't interested in being a head coach, too, at some point. But I learned from Pat Sullivan at Samford to be happy where you're at. Be happy and enjoy the process. That's what I'm doing right now and I look forward to helping restore the pride and success at Miami."